Drop Everything: Drake Had A ‘Re-Bar Mitzvah’ Party 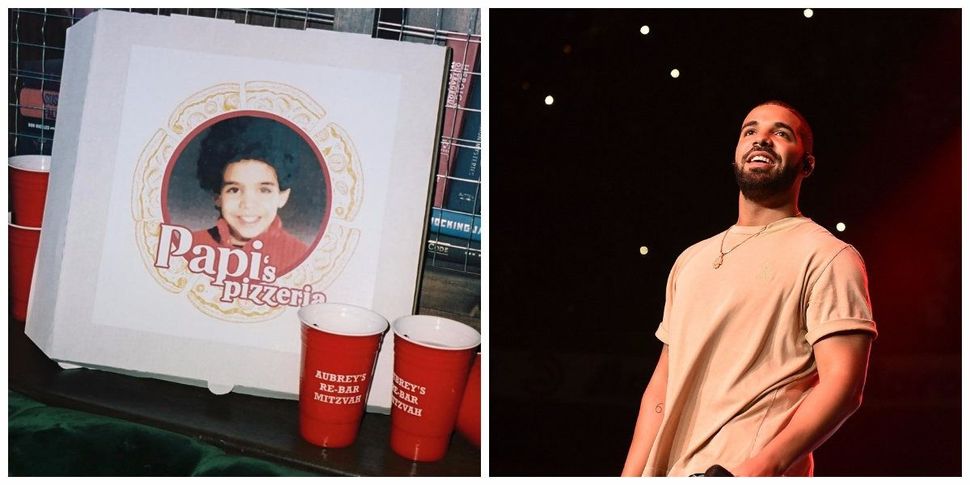 Little Aubrey Drake Graham turned 31 this week and demonstrated that he is, beyond a reasonable doubt, a man. Rapper Drake rang in 31 (13 if you go the Hebrew-reading direction) with a “Re-Bar Mitzvah” at Poppy in Los Angeles.

My bar mitzvah board ?

The decorations? Pictures of Drake’s face as a child on a poster guests were encouraged to sign.

Did Drake hire hype-dancers and then ask them to dress in cheerleader outfits? Yes, he did.

But what else went on behind closed doors on Monday night? Was Drake allowed to invite his whole class? Was Cotton Eye Joe played ironically or genuinely?

Here are 13 things we sincerely hope happened at the party:

2.Drake giving a d’var Torah beginning with the words, “The Merriam-Webster dictionary defines rap as…”

3.A candle lighting ceremony ignored by most

4.A craft table where guests made rustic mezuzot out of literal rebar steel

5.Slow dances to “Burn” by Usher

6.Drake receiving copies of “As A Driven Leaf” and “The Chosen” from relatives

7.Guests dancing to a remixed version of the haftarah blessings

9.Guests going to the bathroom in large groups based on gender

10.A relative giving a long, detailed speech about Drake’s bris

12.A Rabbi trying to encourage teenagers to stay in Hebrew school after their b’nai mitzvot

Just a run of the mill BM party

Can’t wait to see what you come up with for double Chai, Drake! May you go from strength to strength.

Drop Everything: Drake Had A ‘Re-Bar Mitzvah’ Party