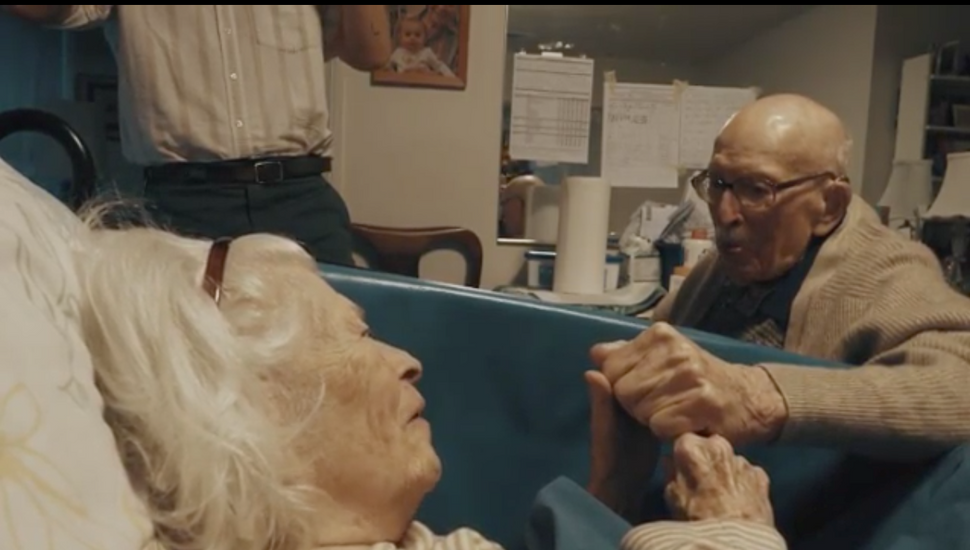 One of the couple’s six grandchildren, Gabe Jacobs, caught the Jacobs on tape wishing each other a happy anniversary on Monday. Marcia, who served for many years as the director of social work at the Hebrew Home for the Aged in Riverdale, New York, can only say “hello” now. But in the video she is able to laugh at her grandson’s jokes. At one point she grasps hold of her husband’s hand hand, pulls it to her lips, and kisses it.

My grandparents are incredible. Arthur is 105 (born 1912), Marcia is 100 (born 1917). Tomorrow marks the 80th year they have been married. They are possibly the oldest living couple in the country. Marcia can really only say “hello, hello” but she seems to have some sort of understanding of her surroundings (watch her crack up at Gideon’s joke in the first clip). Arthur is a beautiful man and so incredibly in love with Marcia. You can see how much Marcia’s state affects him. Proud to have descended from these superhumans.

Arthur and Marcia met at the University of Wisconsin when they were both undergrads. “We were only twenty when we fell in love and got married,” remembers Arthur in the video clip. Their love survived World War II, Arthur earning a Ph.D. in economics, and several moves around the country. The couple has two children, six grandchildren, and two great-grandchildren. “I’ve loved you for 80 years, honey,” Arthur says to Marcia. “That’s a lot of time.”

“Arthur is a beautiful man and so incredibly in love with Marcia,” grandson Gabe, a filmmaker, captioned the video, noting that his grandparents are one of the oldest couples in the country. And who’s the grandson making jokes in the clip? That’s Gideon Jacobs, who you just might recognize from a little film called “Wet Hot American Summer.” He was a love expert then, too.