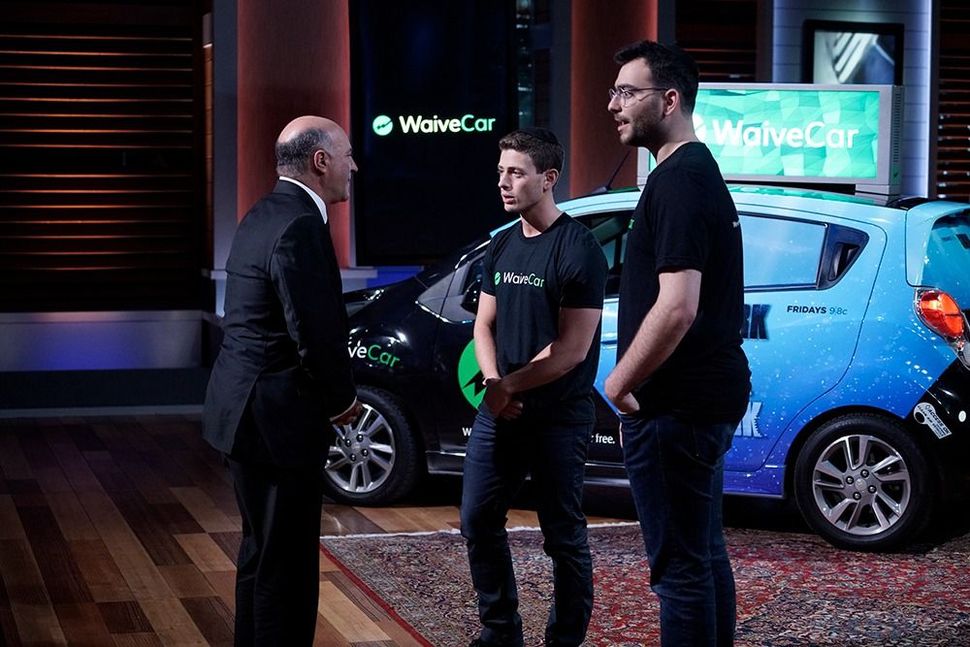 When the now 25 year-old Isaac Deutsch came to Zoli Honig in January 2015 with an idea for a free, electric, car-sharing service, Honig, now 29, told his friend, “You’re nuts! It’s not going to work.”

But within one year the pair had launched WaiveCar, a service which allows users to locate a nearby electric car via an app and drive it for up to two hours for free, thanks to the paid advertisements on the car. Only one month later, they received an email from the executive producer of the hit ABC investment reality show “Shark Tank.” Honig (whom I have never met but who is married to my colleague Michelle Honig, full disclaimer) and Deutsch appeared on the sixth episode of the season on Sunday night.

I had never seen “Shark Tank,” which seems to combine the threat of huge financial loss and social humiliation with the constant, underlying reminder of the existence of literal sharks. Watching people’s dreams shatter between intermittent aerial shots of swarming sharks does not call to me as relaxing evening entertainment. But this episode featured two proud kippah-wearers, so it was my professional obligation to dive into The Tank.

“What are you going to do with your hands when you’re standing?” Deutsch nervously muttered to his business partner as they prepared to enter the investor’s room.

“Probably put them in my pockets,” replied Honig.

Why did nobody tell me how gripping this show is? Nobody, but nobody, has time to watch 9 back seasons of “Shark Tank”, let alone me, who hasn’t even started “Bojack Horseman.” Yet here I am, telling you I was rocked by this show’s terrifying soundtrack juxtaposed with its strangely charismatic middle aged investors, juxtaposed, once again, with shark imagery.

In crisp black t-shirts and matching kippot, the WaiveCar creators pitched their company with the precocious charm of two Jewish Newsies fresh from a trip to Silicon Valley. I wanted to pinch their cheeks and give them all of my money. Shark Mark Cuban, although he said that he liked the idea, and added, “I think you guys have a chance at success,” insisted that advertising was too variable, and declined to invest. 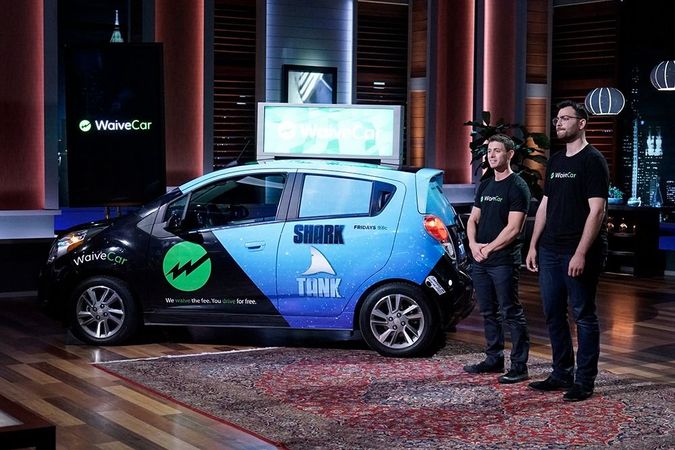 Honig (left) and Deutsch Image by Courtesy of ABC

Shark Lori Greiner said she’d seen WaiveCars driving around Santa Monica and was impressed with the company’s growth in a short time, but also declined to invest, citing concerns that other ride sharing companies like Uber could easily seize hold of their business model, a concern shared by guest shark Chris Sacca. Deutsch’s facial expressions of incredulity were meme-worthy. Honig used the word schtick. But to no avail. Having never watched an episode of the show, I began to be afraid that Honig and Deutsch were going to be fed to actual sharks.

Then, shark Kevin O’Leary, known on the show as “Mr. Wonderful,” offered the team a $500,000 loan with 12 percent interest and four percent equity, plus any unsold ad space. Suddenly, shark Barbara Corcoran offered a straight $500,000 investment with a 10 percent ownership of the company. After a truly climactic negotiation, the Jewsies settled on O’Leary’s loan with two percent equity and the unsold ad space at an 80% discount.

“Barbara, we love you, I’m sorry!” said Deutsch, marching in to shake the sharks’ hands.

“I don’t think you love me enough!” said Corcoran, in a reproachful tone that would make any Jewish parent smile.

Honig says his parents were initially as reticent as some of the sharks. “My parents are, I guess you’d say, from an older generation, and when I got into startups they didn’t quite get what I did,” he says. One of Honig’s earliest businesses was a frozen yogurt store, and he later created and sold the education technology company Chalkable. But with Waivecar’s success has come gradual parental approval. “They were very proud, and very impressed that their college dropout son was so well-spoken,” Honig laughs.

The episode of “Shark Tank” was taped over a year ago, and Honig and Deutsch have continued to strike deals ever since, including a campaign with Buzzfeed and a recent deal with Hyundai Motor America which will provide 150 electric cars and advertising for 12 months. The team has enjoyed O’Leary’s influence as well. “He just puts his name on it and the door is open,” says Honig.

Honig says WaiveCar will start by expanding its Los Angeles presence. “New York is on our short-list,” he adds.