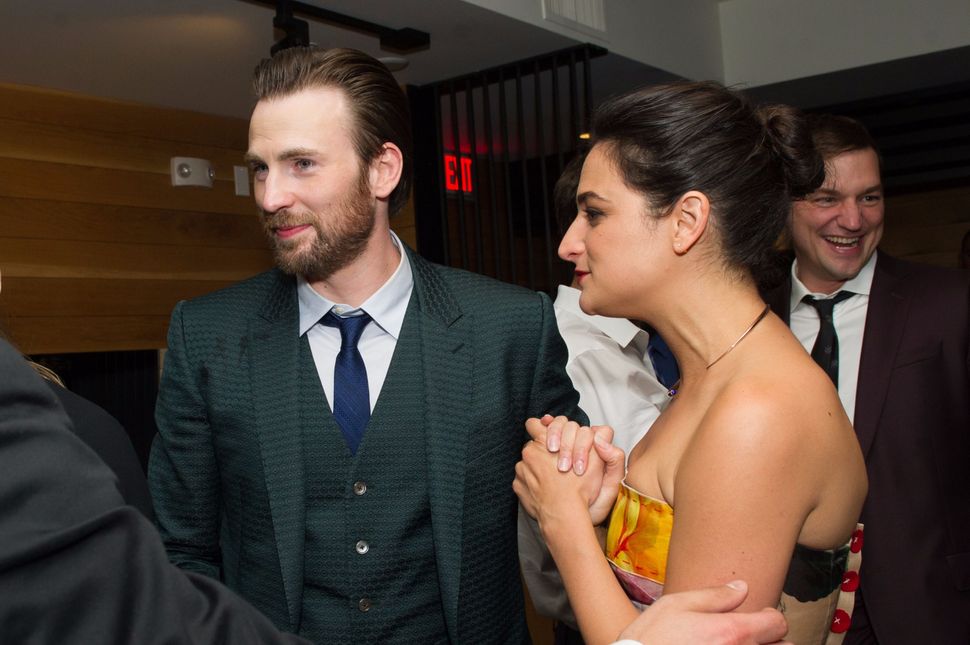 My frenemies, Chris and Jen Image by Getty Images

I believe it was Stacy Ann “Fergie” Ferguson of the Black Eyed Peas who once sang, “Oh no, no, no, don’t phunk with my heart.”

Fergie, who, notably, is also the vocalist on the band’s songs “Where Is The Love?” and “Don’t Lie”, does not joke. And neither do I. It is with great gravity that I say to “Captain America” actor Chris Evans and Jewish comedian Jenny Slate: Oh no, no, no. Don’t phunk with MY heart.

Jenny. Chris. We are your fans and we feel we deserve the truth even though it is not technically any of our business.

Are you guys dating or not?

Chris Evans and Jenny Slate met during an audition for the movie “Gifted”. They filmed the movie. They fell in love. They went on a podcast where Chris said things about Jenny like, “Sometimes you just meet the same kind of animal” and Jenny said things like, “I could hang out with Chris for 90 hours”.

Her: famous for being a funny and quirky Jew.

Him: famous for having blond hair and blue eyes but still somehow looking like someone who would defeat a Nazi, not be one.

Chris and Jenny, you are tearing us apart

At a premier in June 2016, Slate told Entertainment Tonight, “We didn’t know each other growing up, but we grew up about half an hour away from each other.” She added, “It’s kind of like I got my dream 7th grade boyfriend.”

They dated for ten months. And then they broke up.

Here are the things Jenny Slate reported doing in the wake of her breakup from Chris Evans:
-Watching “You’ve Got Mail” while weeping
-Throwing out almost everything she owned
-Listening to “Jagged Little Pill” on repeat
-Sitting by herself in a bar, reading a book about the Holocaust

So you will excuse me if I am a little heart wearied by watching this endearing struggle. To the point that when these tweets appeared last month, I didn’t know how to feel. None of us did.

“Probably haven’t”???? Cmon, Christopher. Have you done your homework or haven’t you? It’s 7pm and you’ve had the whoooole weekend. Cmon.

This is terrifying and exhilarating. Meet me behind the gym after science. I have shark bites.

I think as a close friend of both Evans and Slate, it is appropriate for me to say that I hate this and I think it’s embarrassing. It is not appropriate to involve the general public in the sexual mating dance of your courtship, especially when we’re this invested. And to be super honest, tween-specific role play between adults feels like something that should be private. Also these jokes are terrible.

And yet, I know I am protective only because I want the best for both of them.

Then on election day, one of the most sensual days on the calendar, came this video on Chris’ Twitter. There are no humans in it, but listen closely:

This is Dodger’s stuffed lion. He loves it. He brings it everywhere. If you press it’s paw, it sings. Today, Dodger decided to join in. pic.twitter.com/CuH53VNVtF

JENNY SLATE’S ICONIC LAUGHTER IS IN THE VIDEO!

At this point, I feel that Slate and Evans are antagonizing us on purpose. Is toying with their adoring public a necessary step in their foreplay?

I want to clarify that I don’t even like Chris Evans that much. The mystique around him confuses me. He seems like he could have had a long and happy career as a print model for REI. I don’t share with the people around me the desire to watch him dressed in a patriotic wetsuit for two hours or the rest of my life. I am here in support of Jenny Slate. But there comes a point in every close female friendship when one must think of her own self care. And it is with a great regard for my own well-being that I say, JENNY SLATE, WHAT IS GOING ON?

Please join me in a responsive reading of the following tweet, posted by Jenny Slate on Friday.

I am beginning to suspect that when Jenny Slate tweets, she thinks nothing of my poor nerves.

Is it chris? You guys have nothing to hide anymore so just come out and say it. Quit messing with us.

QUIT MESSING WITH US.

ugh i’m so happy for you – but like it ALSO GIVES ME ANXIETY! it’s not my business, but man i hope (we all hope) it’s Chris.

Will one of the “dreamy&generous” things be submitting the copay to my therapist? I sure doubt it!!!

where do u get ur turtlenecks online jenny

Ah, random internet stranger named Ariane, you keep me grounded. I know that Jenny Slate owes us nothing. We should be so lucky as to know where she online shops. We should be celebrating her turtlenecks with the best of them, not attempting to start a public shaming exhibition to force personal information out of her.

Jenny, and Chris (I guess), we wish you the best in everything you do, together and apart. And if you happened to one day feel like not playing with the hearts of your biggest fans as if they are nothing more than dreidel fidget spinners, we would be grateful.