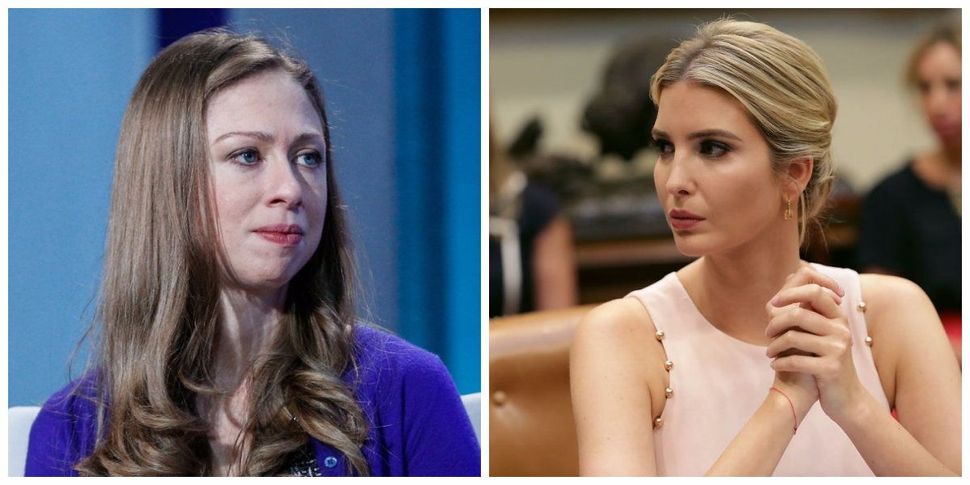 A Clinton and a Trump agree on something, for a change Image by Forward Montage (Getty Images)

Malia Obama, the former-first daughter whose scrutinized life has aroused the sympathy of many a Rabbi’s kid over the years, was seen in an online video this week blowing smoke rings. Footage of the 19 year-old Harvard University student blowing Gandalf-level smoke rings with apparent ease was released first on the site Barstool Sports and then the conservative news site the Daily Caller. The clip came right on the heels of paparazzi pictures of Obama doing what your dad and mine would call “canoodling” with a boy at a Harvard-Yale football game. These brief glimpses into Malia Obama’s life have provoked both massive criticism and wild approval on Twitter, almost none of which is printable.

Malia is cooler than I can ever pretend to be pic.twitter.com/ajlU4lQ5rP

#Proud of both of ‘em tbh #MaliaObama — Also, what does Secret Service do at a tailgate? pic.twitter.com/z13FQ7xuFg

Here are our thoughts: on one hand, Malia Obama is obviously a remarkably talented young woman both at smoking and looking cute in an ironic hat. On the other hand, this may be none of our business. Former first-daughter Chelsea Clinton and current first-daughter Ivanka Trump certainly seem to think so. Both women came to the defense of the older Obama daughter on Twitter this week. The question is: who said it better?

Clinton VS. Trump: The Tweet-Off

We would never compare Chelsea Clinton and Ivanka Trump’s looks or accomplishments or relationships with their dads — it’s tacky! It does not promote the mission of feminism! But when two first daughters rush to the internet to defend another first daughter, it needs to either result in a Haim-like girl band or a Tweet-off moderated by the Forward. For now, we’ll settle for the latter.

Let’s start by analyzing the tweet current first-daughter Ivanka Trump put out in response to the controversy on November 24th.

Malia Obama should be allowed the same privacy as her school aged peers. She is a young adult and private citizen, and should be OFF limits.

Ivanka Trump is an accomplished and exceptionally powerful woman whose beauty is such that I frequently find myself unable to look away from pictures of her. However, her moral vacuousness makes me feel nauseous.

Irregardless, as Ivanka might say, this tweet is a work of art. Stern, passionate, and fact-filled, it stays under 140 characters and makes great use of capital letters. It breaks my verbal spears into artisanal Ivanka Trump-brand pruning hooks and makes me fantasize about going to brunch with her. She received over 200,000 “likes” and a tiny piece of my heart, and probably Malia Obama’s as well.

Malia Obama’s private life, as a young woman, a college student, a private citizen, should not be your clickbait. Be better.

Clinton, too, stayed trendily under the traditional-but-no-longer-mandatory character limit. She contrasted a commanding tone with an apt neologism, demonstrating social media prowess. But where Clinton triumphed was in the phenomenal use of self-righteousness and (might we add Jewish?) guilt that is elegantly dumped on readers at the end of her tweet. The comma usage is iffy, but the tweet is magnificent. Clinton’s tweet received over 400,000 likes, nearly double that of Trump’s.

Both tweets are carefully crafted defenses of Obama. The two tweets have a lot in common — Trump referred to Obama a “young adult,” Clinton called her a “young woman.” Both women use the word ‘private’ redundantly, which may wear on your nerves if you’re that sort of person. Both tweets seem a little selfless and a little selfish. But there’s only one solution.

Ivanka Trump, with strategic use of capital letters and unexpected force, takes the electoral college.

Congrats to both candidates. See you at the next tweet-off.