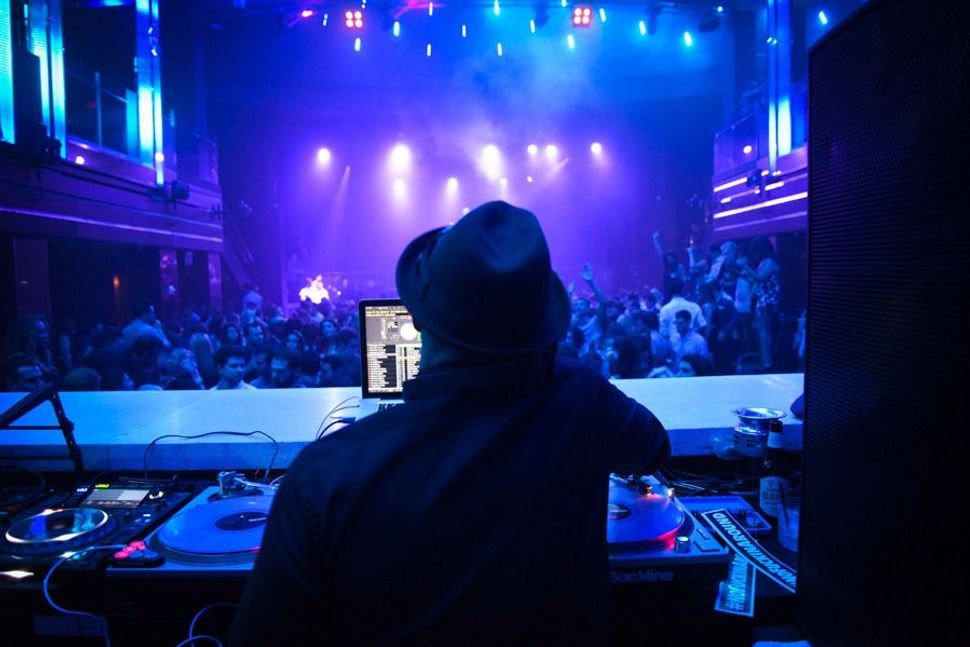 It’s Christmas Eve, and everyone knows what nice Jewish girls and boys should be doing — getting in shouting matches about politics with their parents in Chinese restaurants. But what should somewhat naughty single Jews do on the one night of the year when all the goys are busy? We interviewed Andy Rudnick, the founder of the year’s biggest Jewish singles party The MatzoBall, on how to get the most out of the late hours of December 24th.

Read on for the amusingly grumpy Rudnick’s tips for enjoying the notorious multi-city Christmas Eve event for Jews.

The Forward: Hi Andy! So, what was the genesis of this event? How did it become so major?
Andy Rudnick: I’ve gone over this so many times over the years. Nothing has changed.

Oh, okay. When was the first-ever MatzoBall?
AR: It was in 1987 in Boston. We had over 2,000 people attend. It was very well received among the Jewish community up there — there wasn’t anything going on on Christmas Eve back then.

How did it expand?
AR: After that we had so much success we did it in Boston again, and in the 3rd year in ‘89 we did New York and Boca Raton. Back then it was very different to market it than it is today. We were able to grow it through the fraternity and sorority network. Then in 1990 we had it in Chicago, Washington DC, and Los Angeles. We have 9 cities this year.

Who should go to The Matzo Ball?
AR: It’s for 21-49 year-olds, and the average age is 30. People who should attend are single Jewish men and women looking to meet each other in an environment that’s conducive to having a good time.

So are fifty year-olds not allowed in?
AR: What? We’re targeting people in that age range, so that’s going to be most of the people there, but we don’t discriminate against anybody. If you’re 65 and you feel like you’re young enough to go to a night club in your particular city, why shouldn’t you go? You’re as old as you feel.

Cool. How should one prepare for the MatzoBall?
AR: It’s really anything you would wear to the hottest nightclub on a Saturday night. It’s not a ball, it’s nightclub style. Wear something comfortable to dance in.

Do you warn against super high heels?
AR: I don’t believe we have any warnings.

How drunk should you be?
AR: (Nervously) I don’t recommend drinking at all. We don’t endorse drinking.

Well, won’t there be alcohol for sale?
AR: Yes, but you don’t have to drink it. You can just have fun.

AR: Wait, this is the Forward, right?
Yes, the pop culture branch.
AR The Forward wrote a very derogatory piece about us last year.
(Editor’s Note: The Forward published a reported piece by a Haaretz journalist last December about criticism MatzoBall advertisements received that accused the event’s marketing of engaging in sexism and rape culture.)

Do you want to comment on that?
AR: No.
How is advertising going this year?
AR: It’s the same thing we’ve always done.

How can you get the most out of the event?
AR: Try to network as much as possible. It’s just one night, so you don’t need to meet just one person. Try to meet a bunch of people, exchange numbers, and then use the MatzoBall as leverage for the coming months. You don’t need to sit and talk to one person the entire night. Say — heres my number, I’ll follow up with you — and get together for coffee or a drink later on. Keep moving.

Are most MatzoBall-ers looking for a relationship or something casual?
AR I think they hope for the best and prepare for the worst. I think people want to fall in love, and think if it just turns into a casual relationship that’s okay too. What’s nice is it’s not done in a hotel ballroom or a temple, it’s in a club, so even if you don’t meet someone, you have a nice time. In 30 years we’ve never put name tags or tried to force the situation. We do not want people to feel like they have to meet people — it’ll happen.

Do you recommend going with friends or solo?
AR: A lot of people like to go with their friends, you see a lot of that. It depends on the person — if you are alone you won’t feel uncomfortable. You shouldn’t be afraid to go if you’re alone. I preferred myself, when I was single, to travel alone. Why take a chance on your friends screwing it up?

AR: How old are you?
24
AR: You’re going to meet someone at this event, Jenny.
Okay.

Why is the MatzoBall so successful?
AR: It’s the only night of the year that you can take the hottest venue in any market and deliver it almost exclusively to the Jews. The people going have this underlying understanding — I’d like to meet a Jewish person. I think that’s what makes the MatzoBall so special — we’ve sparked many marriages over the years, countless at this point. You can go on Jdate, or go on Jswipe, or you can go to the Matzo Ball and actually see the real thing. You see someone you’re attracted to, you have an interesting conversation, those relationships tend to grow, and you fall in love.

When should people purchase MatzoBall tickets?
AR: Now would be a good time.

The Forward will be at the NYC MatzoBall on December 24th with appropriate heels and networking enthusiasm. You can get tickets here.