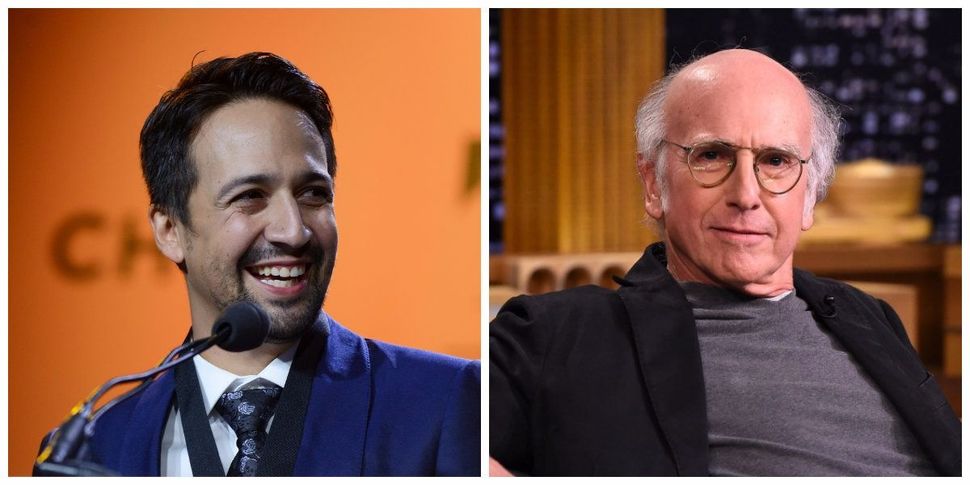 In the eye of the hurricane there is quiet (unless Larry David is there, complaining) Image by Getty Images

How does a bastard, balding, elderly man/Who likes samples and grousing/Living in Bernie Sanders’ shadow/Get a guest star who has music superpowers?

Ladies and gentlemen, the pop-culture moment you didn’t even realize you had been waiting for: Lin Manuel Miranda is guest-starring right now on “Curb Your Enthusiasm,” the show about the man who will never, ever be satisfied. The wunderkind creator and star of “Hamilton” and “In The Heights” played himself last week on the penultimate episode of the belated 9th season of the HBO show, and will reprise his role in the season finale this Sunday.

Taking place in a fantasy world where Lauren Graham would offer Larry David a limitless sexual menu, the season finds David reckoning with the fact that his long-dreamed-of-but-never-realized “Fatwa!The Musical” can only be produced if Miranda agrees to sign on as the star.

This episode offers pornography for a very specific audience: visions of Lin Manuel Miranda wrestling Larry David to the ground and pinning him there are currently replaying on loop in a very select set of Jewish musical theater fans’ minds. Other gems include David asking Miranda for tickets to “Hamilton” … for his personal oyster shucker, Larry David attending a performance of “Hamilton” and falling asleep, and Miranda freestyle rapping “Fatwa! The Musical”.