You Can Now Spin A Dreidel At A Hannukah Pop Up Bar In Washington, D.C. 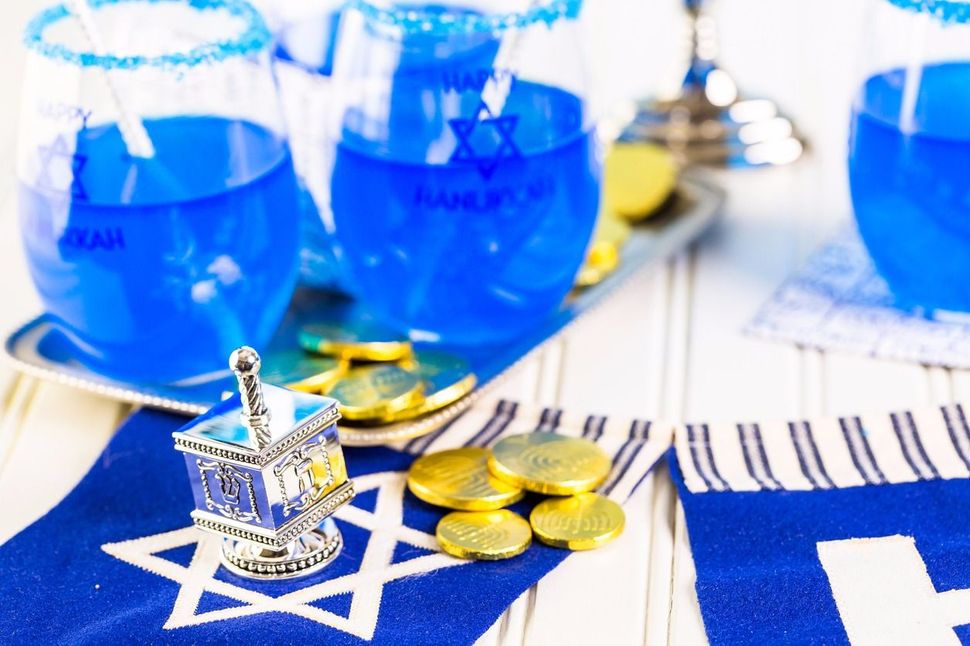 It’s beginning to look a lot like Christmas — but not a lot like Hanukkah. As window displays become pyrotechnic and people start frequenting airport arrivals areas in the hopes of transforming into one of the characters in “Love, Actually,” there are endless ways to get in the spirit of Christ’s birth. But short of dousing your head in oil while listening to Debbie Friedman’s “I Am A Latke,” Hanukkah spirit in America can be hard to come by.

That won’t be the case this year in DC, thanks to Ivy and Coney bar owners Josh Saltzman, Chris Powers, and Adam Fry. The Chicago and Detroit-themed bar in the Shaw neighborhood of Washington, D.C. is just blocks away from “Miracle On 7th Street,” a decadent Christmas-themed pop-up bar with enough Yuletide spirit to give a Jewish 30-something childhood Christmas tree envy again. Saltzman and Fry decided that a “tongue-in-cheek” Hanukkah celebration environment was in order, and thus — “Chai-vy and Cohen-y” was born. They explain it better than I ever could:

From December 1st through New Year’s Eve of the year 5778 (that’s now, for all of you gentiles out there), the Manischewitz shall flow, the dreidels shall spin, latkes shall be eaten. Guests can expect a winter wonderland of awe-inspiring decorations created for the 132nd most important holiday of the Jewish calendar, Hanukkah.

I spoke to Fry, who assured me that Chai-vy and Cohen-y is in no way an attempt to keep up with the goyish Joneses down the street. “It’s in no way a competition,” he laughed. “It’s a very different environment. Ours is just a low-key celebration throughout the month.”

There will be a dreidel competition though, branded as “DC’s oldest and most important dreidel spinning competition.” What are the prizes? “TBD,” (to be determined,) Fry says. But naturally, they’ll be wrapped as presents, and that’s the important thing. Hanukkiot will be lit (and lit) matzo-balls and latkes will be available for pre-dreidel competition carboloads, and it will be a Jewish event where no one will make you drink Manischewitz.

So can we look forward to a “Chai-vy and Cohen-y” Rosh Hashanah pop-up next Fall? Fry calls this “unlikely.” Hanukkah may not be as significant as the High Holidays, but it has deep roots. As the “Chai-vy and Cohen-y” proprietors say, it’s important to remember that “before the boy born in the manger grew up to make furniture and miracles, he celebrated 8 WILD NIGHTS each December with us.”

You Can Now Spin A Dreidel At A Hannukah Pop Up Bar In Washington, D.C.