‘Star Wars: The Last Jedi,’ The Year’s Best Journalism And More To Read, Watch And Do This Weekend 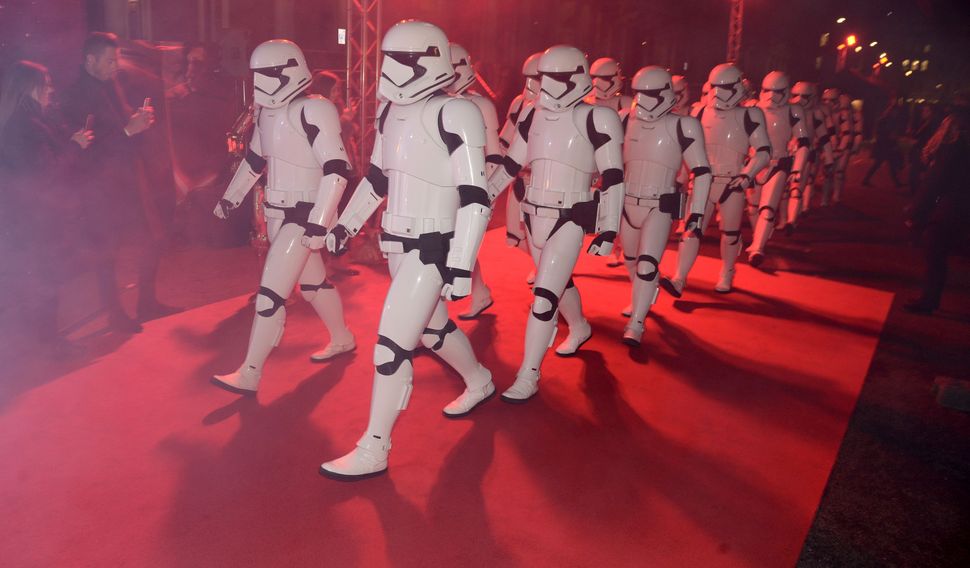 Happy Hanukkah! To those who feel the best present possible would be a new, apparently very good “Star Wars” film: Mazel tov. To those who are less keen on the Force: You’ve got plenty of other options with which to celebrate. Read on for the best things to read, watch and do this weekend in New York City, Washington D.C., Chicago and Los Angeles.

Did we mention “Star Wars: The Last Jedi?” If you’d like a primer on the complicated meanings of the “Star Wars” franchise for Jews, look to Seth Rogovoy’s “Secret Jewish History of ‘Star Wars’” and Noah Berlatksy’s account of the series’ difficult history with Nazi influences. If you have the Christmas spirit, tune into Fox’s “A Christmas Story Live!” starring Matthew Broderick and Maya Rudolph and featuring music by Benj Pasek — a member of this year’s Forward 50 — and Justin Paul: A very Jewish Christmas, indeed. And if you’re inspired by Dan Friedman’s remembrance of Theda Bara, “the original vamp,” seek out some silent films; sadly, none of Bara’s have been preserved.

While Longreads hasn’t yet released their full best-of list, their top stories from each week of 2017 include Reeves Wiedeman’s New York Magazine profile of Brace Belden, a San Francisco Jew who joined Kurdish forces to fight ISIS, and Luke O’Brien’s profile of Daily Stormer founder Andrew Anglin in The Atlantic. I’ll add two stories to those lists, both moving personal essays published in The New Yorker: Stephen Greenblatt’s meditation on reading “The Merchant of Venice” as a Jew, and Kathryn Schulz’s lyrical exploration of the experience of loss.

Constant revelations of powerful men allegedly sexually harassing and/or assaulting women got you down? Find some complicated solace in The Brooklyn Museum’s exhibit “Roots of ‘The Dinner Party:’ History in the Making,” a dive into how Judy Chicago and her collaborators created the enormous feminist masterwork for which she’s best known. While laudatory of the artworks’ mission and creation, the new exhibit is frank about its shortcomings, including its notable sidelining of women of color. (In many mainstream feminist conversations, that issue remains contemporary.) For pure enjoyment, on Saturday stop by Housing Works Bookstore Cafe for a marathon reading of “A Christmas Carol” featuring Jami Attenberg, Maris Kreizman and Lisa Lucas. On Sunday evening, Film Forum will screen Joseph L. Mankiewicz’s “Cleopatra,” starring Elizabeth Taylor and Richard Burton; the four-hour-long epic is always worth viewing.

Escapism rules in D.C. this weekend, as well: Don’t miss “An American in Paris,” choreographed and directed by the marvelous Christopher Wheeldon and featuring songs by George and Ira Gerswhin, during its run at the Kennedy Center. Also worth attending is Theater J’s “The Last Night of Ballyhoo,” Alfred Uhry’s play about Atlanta German Jews confronting their ideas about their identities at the beginning of World War II. On Monday, head to the Edlavitch DCJCC for “On My Mind/In My Heart: The Voices of Women in Public Housing;” ticket purchases will benefit Empower DC in its work to create more affordable housing in the area.

Don’t miss “Beautiful: The Carol King Musical” at the Cadillac Palace Theatre, where it runs through January 28. There’s also a great deal to see at the Chicago Architecture Biennial; start at the Chicago Cultural Center, the entirety of which has been given over to the event, and move out to other venues, including the Hyde Park Art Center and Dusable Museum of African American History.

The residents of Southern California really, truly need a break. On Sunday, take one, and catch the Klezmatics at the Valley Performing Arts Center. If that’s not quite your style, head to American Cinematheque at the Aero Theatre for a double feature of the Irving Berlin-scored “White Christmas” and “Holiday Inn.”

‘Star Wars: The Last Jedi,’ The Year’s Best Journalism And More To Read, Watch And Do This Weekend