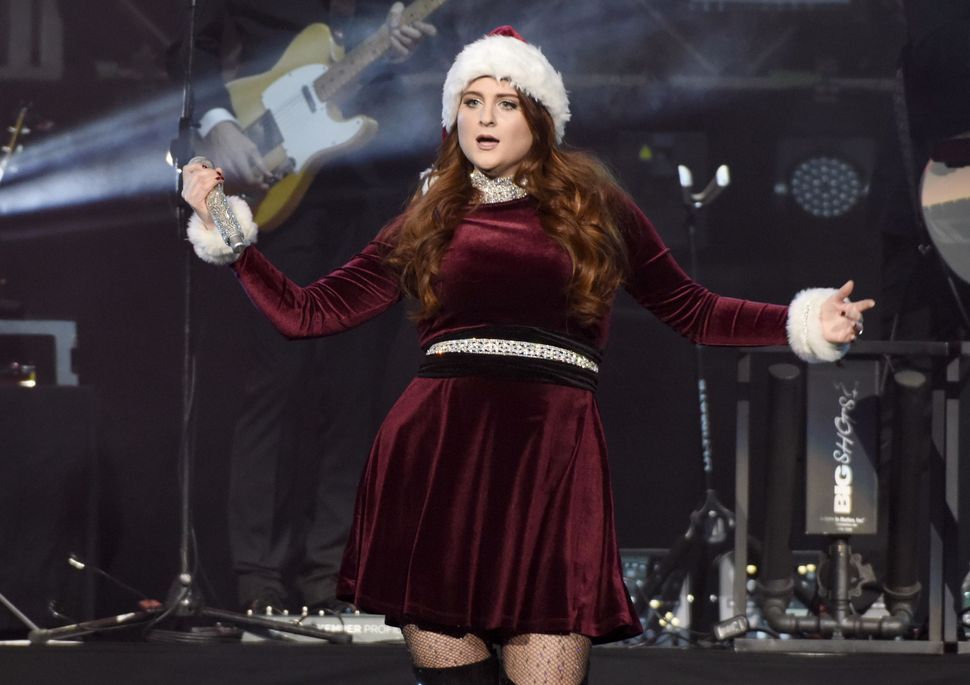 We’ve reeled in a live one! Meghan Trainor is affianced to actor Daryl Sabara. Image by Getty Images

Meghan Trainor has the outsized confidence, the straightened hair and the love-hate relationship with her butt of a Jewish girl (and I can say that because I’m so Jewish I’ve witnessed dozens of live circumcisions.) But Trainor, the 24-year-old singer-songwriter of bubblegum hits like “All About The Bass” and “Like I’m Gonna Lose You” is not, in fact, Jewish.

But now, Meghan Trainor is in love.

Meghan Trainor has “never been this happy.”

Oh you don’t know who Daryl Sabara is? Daryl Sabara, the star of Hulu’s “Resident Advisors” and the movie “Keeping Up With The Steins”? Daryl Sabara the accomplished ballet dancer who once appeared on “Friends”? Daryl Sabara, who told the Los Angeles Jewish Journal in 2005 just before his bar mitzvah, “I don’t want to have a big party or anything. We just wanted it to be meaningful”?!?

Perhaps this will jog your memory of Daryl Sabara.

It has been 17 years since Sabara played Juni Cortez in the original “SpyKids,” but many people are still clearly upset that someone who was once a child is now marrying Meghan Trainor. Please rest assured that all adults were once children, and that Daryl Sabara is probably just as good at spying now as he was in 2001, if not a little bit better.

Sabara and Trainor, who got engaged on the singer’s 24th birthday, have been dating for almost two years. Trainor, who says she is “really good at kissing” also describes Sabara as “the best kisser ever” (we always get in trouble for saying this, but YAY JEWS!) Trainor has also spoken about how Sabara’s affection has helped her see herself differently. “No one expressed how they liked my body out loud in the bedroom until I met Daryl,” she told Cosmopolitan. “He is obsessed with it — every inch. And that has improved my confidence more than even [Trainor’s hit “All About The Bass”] did.”

I SAID YESSSS!!!! For my 24th birthday, the love of my life @darylsabara made all of my dreams come true. He proposed to me under a tunnel of beautiful Christmas lights and surprised me with my family and friends. I’m still in shock. I’ve never been this happy! Thank you Daryl, my family and friends for making me feel like a real princess ????? and thank you @ryan.trainor for this amazing video that I’m gonna watch over and over again ❤️

Daryl is thrilled. Meghan is thrilled. And if you have a heart or a birth date in the ’90s, you should be pretty jazzed too. ~They’re bringing Judaiiiiiiism baaaack!~