Harvey Weinstein Got Slapped By A Random Man. Should America Cheer? 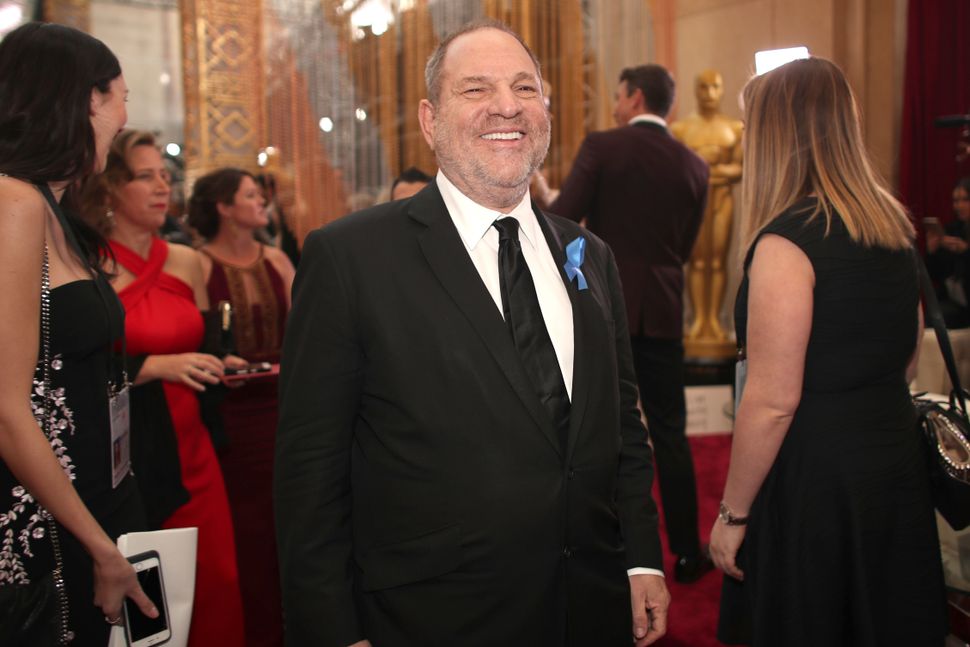 “Is It OK To Punch A Nazi?” America asked, with a seemingly endless appetite for debate, in 2017.

Now the Forward must pose another question: Is It OK To Slap Harvey Weinstein?

Weinstein, the disgraced former studio executive whose reputation has been ravaged by over 80 rape, sexual assault, and harassment accusations over the past several months, was assaulted on Tuesday night at a Scottsdale, Arizona resort.

In a video obtained by TMZ (God bless TMZ,) a dark-haired man who the website identifies only as “Steve” is seen standing over a table in a candle-lit restaurant dining room. He faces Weinstein and a grinning bald man who repeatedly tries to block the camera with his hand. As a voice off-camera warns, “Don’t! Don’t! Don’t do that, man! Don’t do that!” the man we must call “Steve” places his palm on Weinstein’s upper chest and then, almost gently, slaps Weinstein across the face twice with the back of his hand while delivering this monologue, which I would personally like made into a ringtone:

TMZ writes that “Steve” initially told their reporter that Weinstein was rude when asked for a picture, which caused the altercation. The website then produced audio, allegedly of “Steve” and “Weinstein,” in which Weinstein sounds polite, and “Steve” sounds admiring of Weinstein. However, it is hard to imagine why one interaction would have been caught only on audio and the other on video. Additionally it is hard not to view “Steve” as a heroic figure around whom a cult of personality and perhaps devout worship should be established.

But weigh in, dear Forward readers. Is violence never the answer? Is all you are saying is give slapping Harvey Weinstein a chance? Is 80-alleged-sexual-violations-for-a-slap the new eye-for-an-eye? Or should we just refocus all our attention on the football heiress who allegedly hit a man in the head with a glass purse while screaming, “hurry up, Jew!”? You decide.

Should a random man at a resort have slapped Harvey Weinstein twice?

Harvey Weinstein Got Slapped By A Random Man. Should America Cheer?