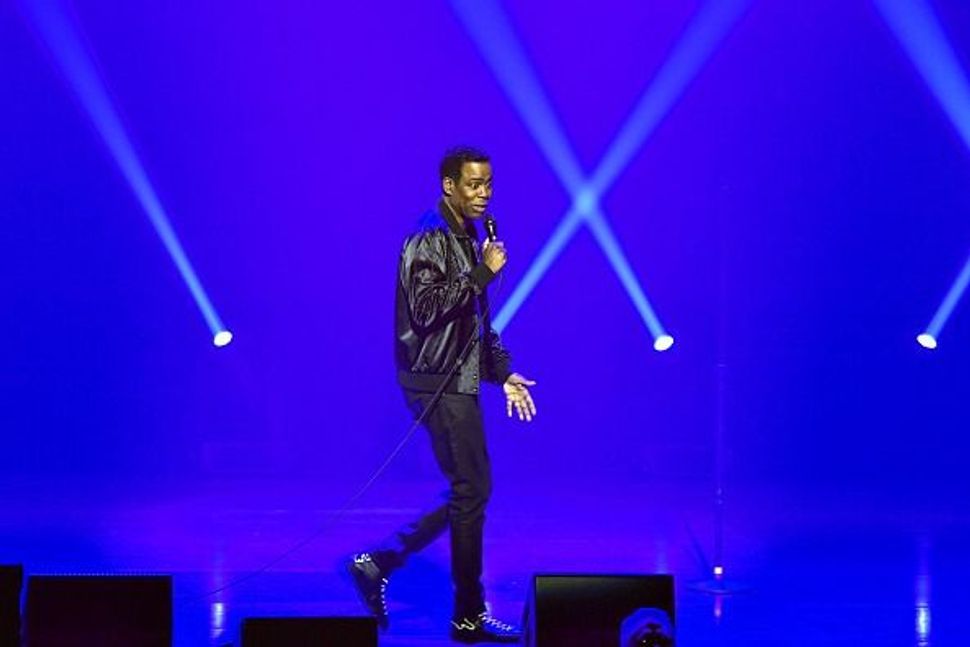 “Tel Aviv! Shalom, motherf*****s!” Chris Rock shouted last week, looking out over the crowd of 10,000 who had gathered in Tel Aviv’s Menorah Mivtachim Arena to watch the comedian’s first ever show in Israel.

Nine years after the brash comedian’s last world tour, Rock has returned with 70 minutes of what is, by all accounts, blistering honesty about his infidelities and subsequent divorce, finances, failings and feelings.. With the darkest of comedy and the bleakest of outlooks, it’s no wonder that Rock made his way to the homeland of the Jewish people. Or, as Rock put it in his show, thanks to divorce proceedings “I lost so much money, I’m doing shows in Israel.”

Rock’s “Total Blackout” tour brought him to the Holy Land for a second time (the first was to publicize his role in “Madagascar:2”) and he happily let the spirit overwhelm him, like a first-time shuk visitor caught between aggressive halva salesmen. “I guess I am trying to find God before he finds me,” he reflected suddenly to the audience during what was supposed to be, remember, a comedy show. “I’m loving this country,” he shouted in another moment, as the audience applauded. “Israel! Yeah!” The fact that Rock did not, at this point, upend a bottle of Goldstar on his head is surprising. Next time.

The cost of being present at Rock’s Sinai and receiving Rock-style revelation was not cheap — tickets ran $75-164, but the fee included a type of tzedakah. Some profits will go “toward helping little black girls attend private school,” Rock told the crowd. “If anyone asks what you did tonight, you can say, ‘I made a difference,’” he added.