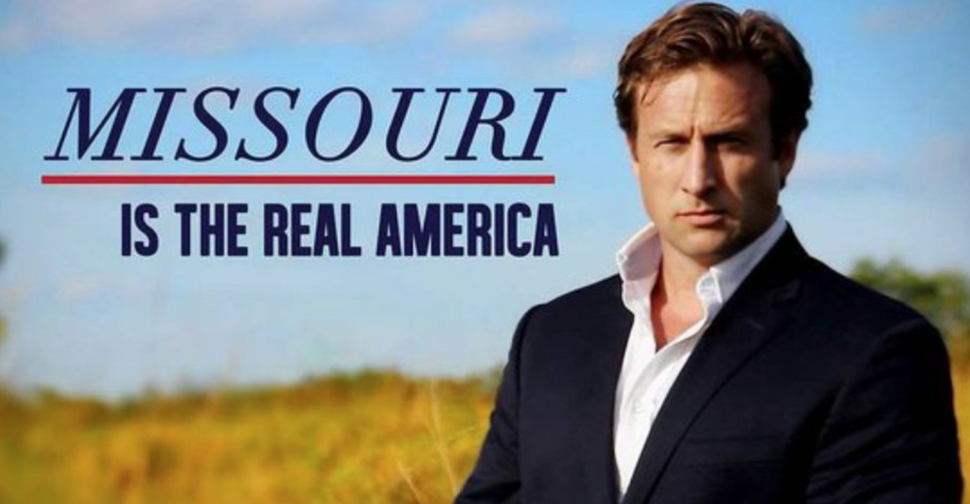 Courtland Sykes has been a resident of Missouri for less than a year, according to the St. Louis Post-Dispatch. Image by Twitter Screenshot

The condition of our nation’s democracy is no joke, but sometimes you have to take your laughs of despair where you can get them. The rogue-ishly attractive, loathsomely misogynist Missouri U.S. Senate candidate Courtland Sykes specializes in this kind of unintentional end-of-days humor. His belief that feminists’s heads are full of snakes, his desire to uphold the right of every woman in the world to make him dinner and his billowing masculine scarves give him the appearance of a robot made in the same factory where Paul Ryan was produced — but at a lower price point.

Courtland Sykes, if that even is his real name, is a Republican who will be challenging incumbent Democrat Claire McCaskill along with his fellow GOP member, and the state’s Attorney General, Josh Hawley, in the 2018 race.

Sykes is a character so mysterious and of such unknown provenance, that newspapers have taken to describing him as “a man of mystery” and “something of a puzzle,” and directing readers to his LinkedIn page for more information. The Post-Dispatch actually consulted with a political scientist to confirm that Sykes is, in fact, real. John Messmer, the professor who the paper consulted with, said that he is “99.9 percent sure it’s not a parody,” but added that there was still a chance Sykes’ campaign is a piece of “political performance art.”

“It laughs at fear, afraid of nothing; it does not shy away from the sword… In frenzied excitement it eats up the ground.” ~ Job 39 22-24 #mosen #maga

This sort of content may be what Messmer is referring to when he says “political performance art.”

Here’s what we do know about bodice-ripper cover art model Courtland Sykes:

His greatest fear? As he said in 2017, when asked if he supports women’s rights:

I don’t want [my daughters] to grow up into career obsessed banshees who forego home life and children and the happiness of family to become nail-biting manophobic hell-bent feminist she devils who shriek from the tops of a thousand tall buildings they are think they could have leaped over in a single bound — had men not “suppressing them.”

This comment came as part of an 11-page statement that Sykes sent to the St. Louis Post-Dispatch in September in lieu of a second interview. In a word salad decadent enough to be from Sweetgreen, Sykes wrote that he does support women’s rights because his fiancee, illustrator Chanel Rion, “has given me orders to favor them.” He added that this support comes with a “small price”: “I want to come home to a home cooked dinner at six every night,” he wrote. “One that she fixes and one that I expect one day to have my daughters learn to fix after they become traditional homemakers and family wives — think Norman Rockwell here and Gloria Steinem be damned.” Sykes has added that he doesn’t accept the definition of modern women offered by feminists like Steinem — “they made it up to suit their own nasty, snake-filled heads,” he wrote.

Asked about this statement in a radio interview on Friday, Sykes confirmed that his sentiment remains unchanged. “There has been a war on men in this country for years,” he told the St. Louis radio station. Sykes explained that he “pushed back” at the question because, “There’s no difference between men’s rights and women’s rights we don’t have laws that restrict men or women, so I thought it was kind of a silly question.” This alarming ignorance about the penal code aside, Sykes was able to name some women he thinks are “the best model of feminism today,” including Kellyanne Conway and Ivanka Trump.

So now we have met Courtland Sykes. His hair has exceptional volume and his face is caught in a perpetual sneer, like a handsome Disney villain in the days of “Steamboat Willy”-era of animation. This she-devil is laughing, and she is also paying close attention.