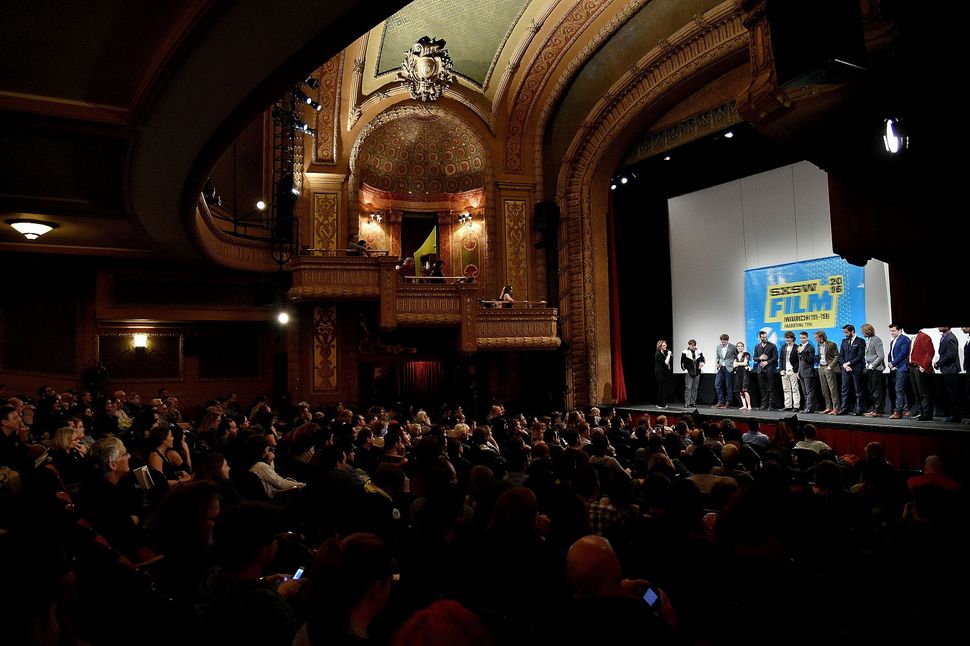 Each year, Austin, Texas strains its infrastructure and its AirBNB capacity to host South by Southwest (SXSW), a gargantuan mix of trendy conferences and festivals focused on film, music and interactive media. In 2017, the event attracted over 70,000 attendees.

On January 30, the festival unveiled its 2018 film festival lineup. Here are the choicest cuts of Jewish-helmed cinema from the festival’s major categories.

Schwartzman’s latest project promises to induce comic queasiness. According to Variety, the comedy follows “an engaged couple forced to visit Palm Springs for a weekend to celebrate her parents’ 25th wedding vow renewal” who discover that the secret to the couple’s happy marriage is, uh, threesomes.

“The World Before Your Feet” (World Premiere)

Director Jeremy Workman has an affinity for obsessive, eccentric and single-minded documentary characters. (Jesse Eisenberg, who so often inhabits neurotic or obsessive psyches onscreen, is his latest film’s executive producer.) In his film “One Track Mind” (2005), Workman followed Philip Ashforth Coppola, an amateur public transport aficionado who spent 30 years drawing extremely detailed images from every station in the New York City Subway system. In “Magical Universe” (2014), Workman chronicled his friendship with the outsider artist Al Carbee, who devoted several years of his life to crafting elaborate works of art out of Barbie dolls.

“The World Before Your Feet” follows Matt Green, a former engineer who left a stable job to walk every single block in New York City. That’s over 8,000 miles of streets, avenues and walking paths. In addition to this feat, Green took thousands of photographs, and continues to publish blog posts about each and every one of his daily journeys.

The story is at once a charming portrait of one man’s eccentricities and a sprawling journey across five boroughs and several very active years.

Gabriel Silverman and Fiona Dawson’s “Transmilitary” tackles one of the most pressing civil rights issues of our time, chronicling the lives of four members of the U.S. military who risked their careers and their families’ livelihoods by coming out to Pentagon officials as transgender. In doing so, these individuals helped pave the way for reform to the military’s draconian policies regarding transgender troops. Now, however, as the Drumpf administration’s proposed ban on transgender troops threatens to again wipe away their right to serve, these soldiers’ futures remain in the balance.

Silverman was previously a reporter for The Washington Post, where he was awarded an Edward R. Murrow award for his investigative films. Along with Dawson, he produced “Transgender, At War, and In Love” for the New York Times “Op-Doc” section. The piece struck a chord with viewers, and became one of the Time’s most-viewed online short films. “Transmilitary” is a feature-length extension of that project.

Despite its silly title, “Weed the People,” directed by Abby Epstein, tackles a serious topic: It’s a deep dive into the phenomenon of individuals using cannabis and other herbal medicines to combat serious ailments. Most controversially, the film follows parents who use medical cannabis, in conjunction with traditional treatments, to combat their children’s cancer.

On the film’s IndieGoGo Page, the filmmakers state that their goal in investigating this phenomenon is to “look beyond pot-activist propaganda and politics to reveal the legitimate science behind cannabis medicine and the compelling stories of ordinary people whose lives are inescapably caught up in the controversy.”

Indeed, the film promises a (somewhat) objective look at the effectiveness of these drugs. Beyond anecdotal evidence, it will explore clinical trials that have produced encouraging results, including those conducted by Israeli scientist Dr. Raphael Mechoulam.

“Daughters of the Sexual Revolution: The Untold Story of the Dallas Cowboys Cheerleaders” (World Premiere)

“Daughters of the Sexual Revolution” is the latest narrative film from Dana Adam Shapiro. The director’s 2005 documentary “Murderball” followed the U.S. and Canadian teams in the lead-up to the 2004 paralympic games’ full-contact wheelchair rugby tournament; his 2011 drama “Monogamy,” which starred Rashida Jones, observed the damage incurred on an engaged couple’s relationship by the groom-to-be’s obsessive, voyeuristic urges.

While his documentary work has historically been more well-received than his narrative forays, Shapiro has decided to return to fiction to tell the story of Suzanne Mitchell, the original “den mother” of the Dallas Cowboys cheerleaders. Mitchell, formerly a New York PR executive, moved to Dallas to help spruce up the team’s cheerleading squad. Her efforts led to sweeping changes that ultimately transformed professional cheerleading.

From Mitchell’s point of view, turning the Cowboys cheerleaders into a sexualized global phenomenon meant success. According to The New York Times, in 1978 she told Sports Illustrated “Sports has always had a very clean, almost Puritanical aspect about it, but by the same token, sex is a very important part of our lives. What we’ve done is combine the two.” It remains to be seen whether Shapiro will contest or uphold that point of view.

In 2012, Alison Klayman was named a Forward 50 honoree for her documentary on Chinese dissident Ai Weiwei, “Ai Weiwei: Never Sorry.” Her latest effort, “Take Your Pills,” follows students and workers who, driven by ruthless competition, abuse adderall and other prescription stimulants. The film is both a portrait of individuals whose lives have been affected by Adderall and a broader look at the role of stimulants in our competitive, over-drugged society. “Take Your Pills” marks a change in direction from “Ai Weiwei: Never Sorry,” which examined the artistic practice and social activism of the titular public intellectual, artist and dissident.

Klayman hasn’t released much information about her soon-to-debut film, but judging from her intimidating list of past honors — including shout-outs by Manohla Dargis and A.O. Scott in The New York Times, and awards for past films from Sundance, Berlinale, and other film festivals — this documentary will be a must-watch. Luckily, if you can’t make it to SXSW, it will stream on Netflix soon after its premiere.