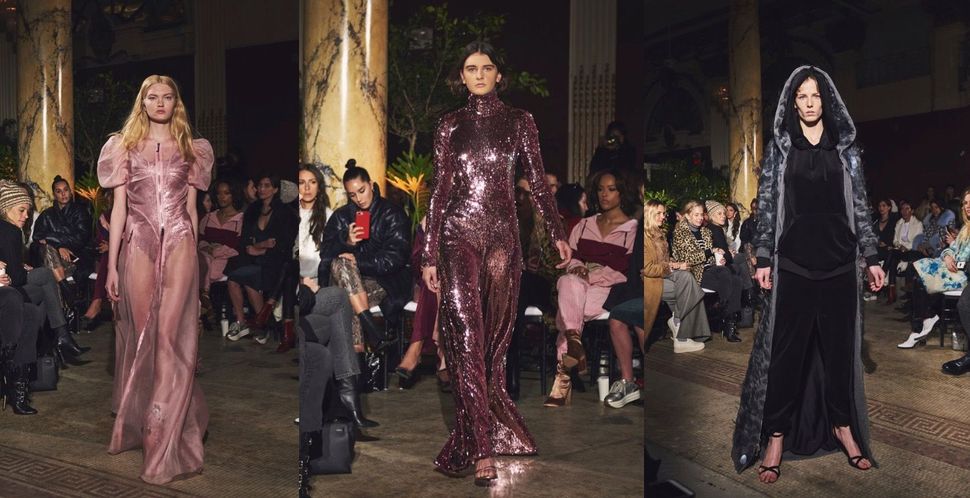 Jamie Mizrahi took the bubblegum pink velour tracksuit a la Paris Hilton circa 2002 to a dark, Gothic place. Which made the Hotel Wolcott — a dilapidated Midtown building which may or may not be haunted — the perfect place to stage a morbid ode to the death of the original Juicy Couture.

It’s obvious that Mizrahi wants people to look at Juicy in a new way — that it’s more than tacky tracksuits for bored suburban housewives, but a brand that’s relevant in 2018. But that didn’t stop her from taking the opportunity to experiment with the iconic loungewear. The zip up was elongated by several inches, becoming a floor-length hooded duster in oversized paillettes. It was looser, more oversized. There was a definitive masculine edge, especially in the way the clothes were cut (particularly in the leather pieces). But as the show progressed, femininity began to emerge, making an appearance in leopard coats and a sheer, bubblegum pink puff-sleeved floor duster.

Sadly, the collection slowly morphed into a facsimile of Demna Gvasalia’s Vetements. Vetements, the influential French fashion brand which has made tacky, logoed clothing cool again, also made Juicy Couture relevant again a couple of years ago by creating several pieces in homage to the suburban loungewear staple. But in relying on Vetements influence, there’s a certain amount of enmeshment evident in Juicy Couture’s appeal for relevance. Juicy Couture can’t seem to shake Vetements, like with the pink sequined turtleneck gown that called to mind Vetements silver sequin dress that was famously worn as a Mommy and Me twinning moment by Kim Kardashian and her daughter North. In other words, if Juicy Couture continues down this path, it will become, quite literally, the poor man’s Vetements, making clothes that people with more money than sense want to wear.

In a branded finale, a gaggle of tracksuits trouped down the runway. And it was there that a glimmer of hope bubbled to the surface — the tracksuits, instead of looking tacky or dated, felt just right. In this era of streetwear, where $1,000 tracksuits are worn unironically, Juicy Couture’s aesthetic finally fits.