Feminism Gets A Hefty Dose Of Femininity At Jonathan Simkhai 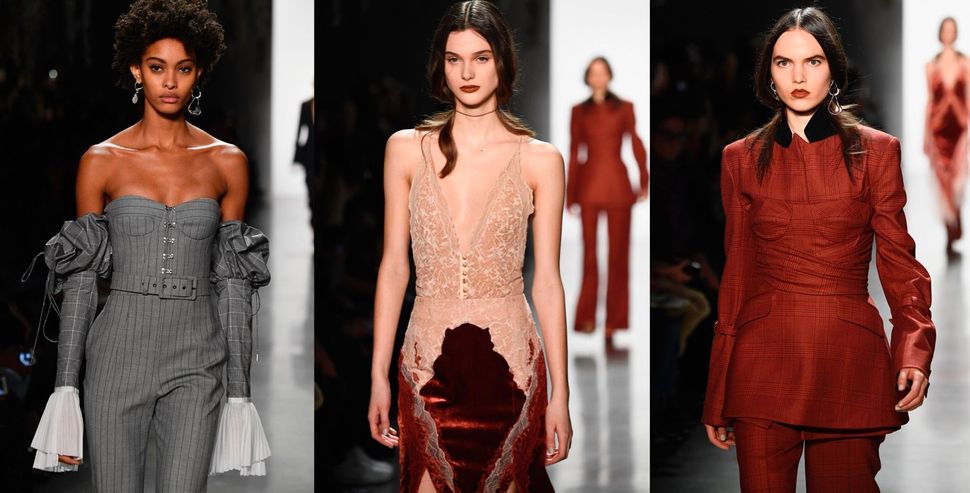 Like many designers this season, Jonathan Simkhai was inspired by feminism. But unlike other designers, there were no empty slogans, no protest shenanigans. This was a straightforward runway, where the clothes spoke for themselves. Which, in this case, was the strong, bold woman who continues to fight for equal rights as she lives in the clothes that will serve as her armor.

Opening the show was a glen plaid off-the-shoulder suit with abbreviated leg-of-mutton sleeves, a modern inversion to the Renaissance image of damsel-in-distress as the woman breaks the corporate glass ceiling.

Inversions and plays on silhouettes were key in this collection. Instead of “freeing” women from corsets, tight bodices and bustiers served as that armor. And, ingeniously, he took the tailored pantsuit — the mark of the upwardly mobile man and the feminist woman — made it a rich, lipstick red, and stitched a bustier panel. It was as if the suit reaffirmed that powerful women who engage in femininity are all the more powerful because of it.

Other high notes are the various takes on the boudoir-chic of silky, lacy negligees. Which, in a collection on women’s empowerment, was a bold stance to take: women can embrace their sexuality, revel in it, even, and not lose their power or chance at equality.

Feminism Gets A Hefty Dose Of Femininity At Jonathan Simkhai