Victoria Beckham’s Fall Collection Is A Lesson In Luxurious Classics 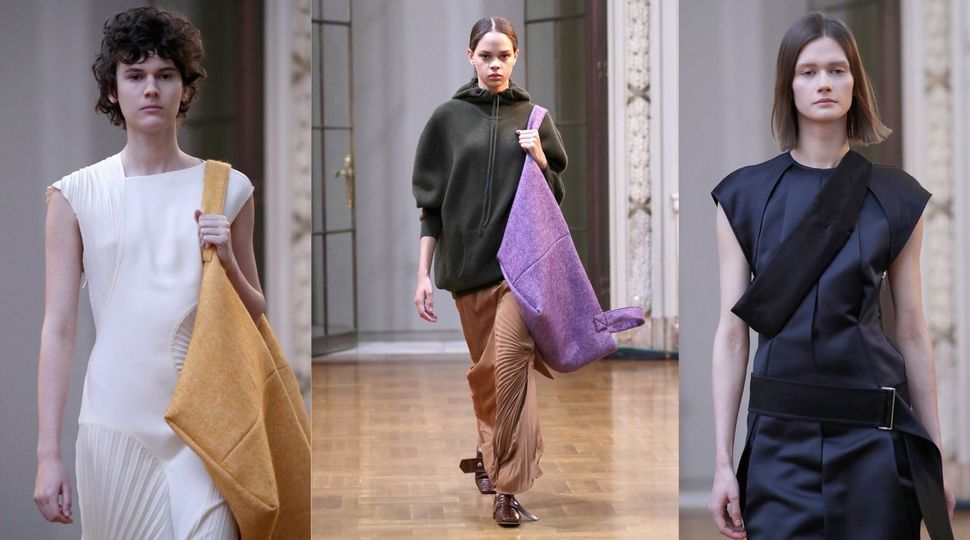 Designer: Victoria Beckham
Date: Sunday, February 11, 2018
Location: James Burden Mansion on the Upper East Side
Jewish? No, but her husband maybe, sort of, kinda is: his grandfather on his mom’s side was Jewish. Also, bonus: Victoria used to have a biblical verse in Hebrew tattooed on her neck.

It’s been nearly ten years since the former Spice Girl sent out her first eponymous collection. Next season, she’ll head back across the pond to London with an official celebratory collection.

But, for her Fall show, Beckham wanted something a little less extravagant…in a manner of speaking. Yes, it was a small, intimate affair, with a limited number of editors and buyers invited, but it was also presented in the decadent, Versailles-style ballroom of the James Burden Mansion on the Upper East Side.

But perhaps that was the point — like the Upper East Side’s aristocracy, such as the family that formerly occupied this mansion (it now houses Sacred Heart Academy’s lower division), the collection was timeless and expensive. And Beckham’s fall collection — filled with simple yet luxurious clothes — was as tasteful as it gets. Supple black leather dresses were belted at the waist; there were brogues with squared off toes, like a modern-day Pilgrim; there were wide bands of satin wrapped artfully around a structured, tailored navy dress and vest with wide lapels.

Highlights included the huge, oversized bags that could double as a diaper bag in rich tones of burnished copper, soft purple and leopard. And then there was the subtle pleating detail, seen in fluid skirts and dresses, but was most gratifying in the form of a long white frock: panels of silk was cut, in geometric half moons that curved around the body, to reveal panels of pleats — shoulder pleats, asymmetric pleats, sideways pleats — that, at the thigh, was gathered to create a pleasing, 3-dimensional quality.

Creating a successful fashion line as a celebrity is easy — ride off the wave of your fame, and your fans will come in droves to buy.

But creating a successful luxury line, that is critically acclaimed by the notoriously snobby fashion industry, is extremely difficult.

The few who have succeeded — like Beckham and the Olsen Twins — have done so by dedicating themselves to their crafting, creating a core brand DNA that shifts, ever so slowly, as they mature and grow as designers.

When Beckham began, she used her own aesthetic as the starting point, creating super fitted dresses that highlighted an ultra-slim body.

But instead of ossifying, cleaving to her fitted frocks, she shifted, ever slowly, to create clothes that are classic and timeless. And this collection, with its sophisticated, classic edge that appeals to all ages, speaks quietly, yet firmly: Victoria Beckham is a master of her craft.

Victoria Beckham’s Fall Collection Is A Lesson In Luxurious Classics