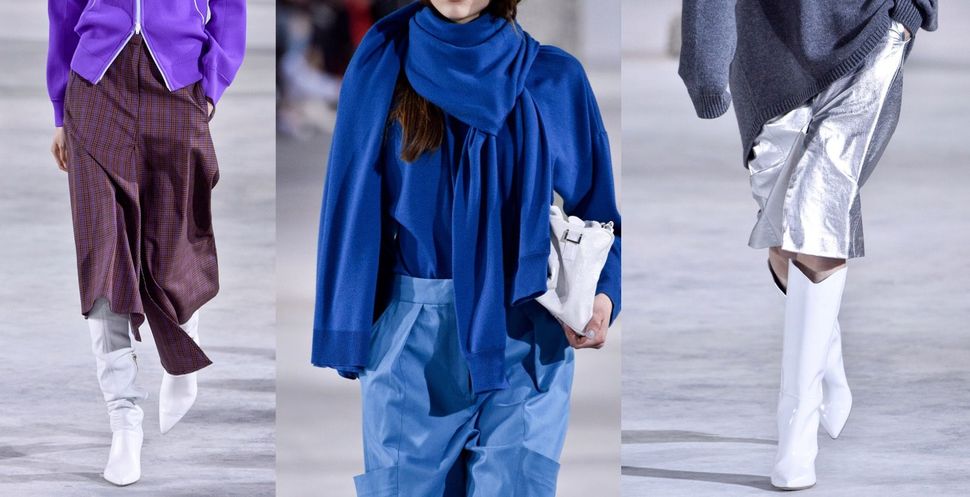 Designer: Tibi
Date: Sunday, February 11, 2018
Location: Pier 17 at South Street Seaport
Jewish? Amy Smilovic is married to a Syrian Jew, but we’re unsure if she herself is Jewish (although, if we had to guess, she probably is).

Tibi as a brand never says anything new. They are, essentially, the higher end Zara, recycling trends into wearable iterations for the masses.

But just as the bass-anchored, remixed instrumental version of Eminem and Rihanna’s “Love The Way You Lie,” that played as the models stalked the catwalk uplifted and modernized the song, the way Smilovic interprets these trends is her true genius. The styling was impeccable — a neutral base grounded the street-style bait-approved pops of color — like fluorescent orange and yellow in fluffy sweaters and coats, matte emerald green and stark white pointed toe booties (a la Balenciaga).

Indeed, it seemed like a Balenciaga-lite show. Like Juicy Couture, Demna Gvsalia is an important influence (he’s the creative director of both Vetements and Balenciaga). Which is unsurprising, considering the outsize influence the man has had on the fashion conversation at the moment.

Even when neutrals were discarded, the colors were mixed together brilliantly — in perfect, streetstyle-bait fashion. Like the pink dress and orange coat combination, paired with the blue pointy toe pumps. The bold, constructed bags were also covetable, as was an abbreviated navy puffer.

And there were fun surprising touches that underscored the strength of the collection: The two-tone blue and white harness print dress that referenced construction; the blue quilted panel in a navy pencil skirt and, again, in a softly tailored pantsuit; the at-first-glance-graffiti-but-really-construction-instructions in fluorescent in orange and blue on a camel coat; the silver sequined turtleneck inset in a languid, black silk dress that made the visage of an already glowing Vlada Roslyakova shine even brighter.