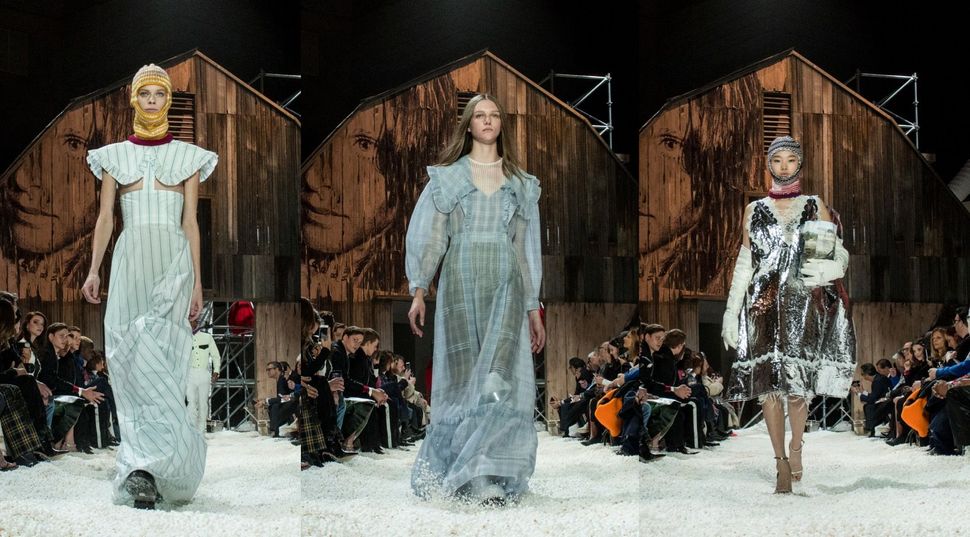 When a designers sets out to create a collection for the new season, he or she will always begin with an idea or source of inspiration. But rare is the show that takes an idea and so fully and satisfactorily realizes it.

Which is why the Calvin Klein show, located at the American Stock Exchange, was so unbelievably fantastic — at least, at first.

According to CK designer Raf Simons, we are living in a barren, prairie wasteland, and he has just thing to “fix” it: literal construction uniforms and light reflective vests; sheer, romantic, floor-length ruffled dresses; metallised film frocks shredded and edged in lace; boxy, oversized coats paired with thick, seemingly rubberized gloves and boots; and knit balaclavas that were striped, leopard-ized and metallacized.

Set in the American Stock Exchange, the room was transformed into an abandoned farmland filled with decaying barnhouses whose spare scaffolding was painted with faded Andy Warhol artwork. In the corner was a silo, whose facade was covered in tentacles of industrial exhaust ducts. Out of these ducts — which are normally used to collect and move around dust or any hazardous materials from the air — flowed popcorn; copious amounts of it. Popcorn covered every inch of the floor, and audibly crunched as the models stalked down the runway. The kick up from the popcorn was like the ever-present dry topsoil that swirled across barren fields during the Dust Bowl, or the backroads of a remote stretch of country.

Calvin Klein is a quintessentially American brand. When Klein began his eponymous line, he and Ralph Lauren had dueling approaches to what it means to be an American brand: Klein was the rugged, down-home country to Lauren’s WASPy prep. But as Calvin Klein’s new creative director, Simons — who is Belgian — has begun subverting the brand’s rugged sensibility to explore the dark underbelly of American life in the heartland.

The balaclavas in particular referenced that darkness — an allusion to the militarization of our police force (SWAT wears balaclavas during raids) and the way such headwear is often used by totalitarian governments to intimidate and terrorize. But it’s also a practical garment, used to protect the face from the bitter cold of winter. And it’s that duality that Simons played with, which was further underscored by the fun, even whimsical fabrications of the knit wool: leopard, stripes, even a space-agey silver monastic hood.

Despite the fact that this show presented both male and female fashion, there was a natural flow to it all that blended together like the drab palette of a Midwestern plain. And the subversion of classic American folklore was a running thread that was highlighted by the somber and conflicted, if vaguely hopeful soundtrack that played as the models strutted down the runway. A striped peasant dress, with frilly bib neck, sounds like the kind of modest garb you’d find out on the prairie. But Simons again, subverted this idea, cutting the dress just underneath the bust, creating a geometric, t-shaped line. The model’s breasts were unrestricted and free — as she walked, her nipples threatened to reveal themselves.

Patchwork shirts evoked quilting — a classic staple of American folk art, as did sweaters with patterned “frays,” like the wear and tear endemic to the hardscrabble life of the dusty storm ravaged prairie lands.

Andy Warhol imagery re-appeared in the form of movie theater popcorn bags, which depicted Warhol’s silkscreen of a crashed ambulance, a part of his Death and Disaster series, which symbolized, “the little man being ground down under the behemoth of mass society.” It’s why it was a collection whose fabric literally frayed at the edges. It’s why the barn houses that formed the runway set were decaying and decrepit. It’s a dark vision of the world, but there was a glimmer of hope too: Gird ourselves in Simon’s cloaks of armor and we might just survive the impending apocalypse.