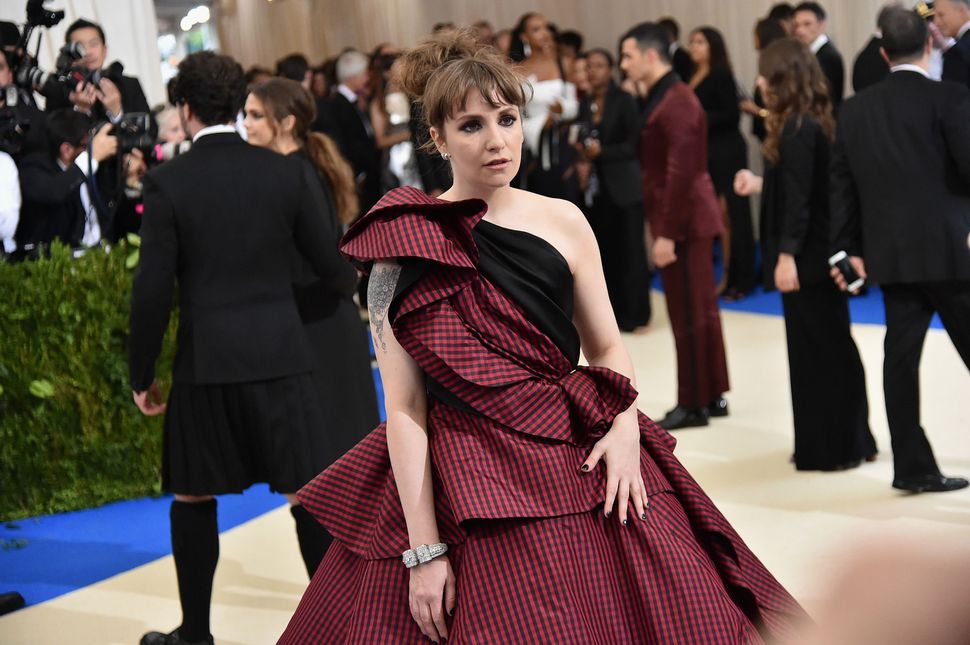 We are mean to Lena Dunham here at the Schmooze. She is an easy target — young, white, wealthy, successful, talented, friends with Taylor Swift, from a well-connected family, and prone to the public displays of ignorance that epitomize well-intentioned white people.

But ultimately, she is a human being. She experiences pain and loss the way all of us do — and she’s a lot better at writing about it than most of us.

Lena Dunham’s humanity really rang through in the Vogue essay published this afternoon in which Dunham shares the gritty details about the hysterectomy she underwent a few months ago after a battle with endometriosis.

Any woman who has had her pain dismissed by the medical community will find Dunham’s essay painfully relatable.

Dunham writes, “From August to November I try desperately to manage this new level of pain. I try so hard it becomes a second job. I go to pelvic-floor therapy, massage therapy, pain therapy, color therapy, acupuncture, yoga, and a brief yet horrifying foray into vaginal massage from a stranger. I am determined to outmaneuver whatever is eating me from the inside. But I can only run so well with cement blocks strapped to my feet. Finally I ask my doctor if my uterus needs to come out. She says, ‘Let’s wait and see.’”

Dunham goes on to describe how she checked herself into the hospital, refusing to leave until the doctors removed her uterus. It wasn’t until the doctors consented and the hysterectomy was performed that Dunham’s certainty was affirmed — her uterus was in terrible condition and she was bleeding into her stomach.

It’s an all-too-familiar story. Historically, women’s pain has been dismissed systematically by doctors who assume it’s all in their head. Considering that women are also more prone to diseases that result in chronic pain due to their naturally weaker muscles, this is an issue that can threaten the very life of women everywhere.

Dunham doesn’t focus primarily, however, on the sexism at play here. Instead, the heart of the essay speaks to a different but equally relevant female struggle — infertility.

Dunham writes, “The fact is, I never had a single doubt about having children. Not one, since the day I could understand how families were made. And pregnancy was the glorious beginning of that vision. As a child, I would stuff my shirt with a pile of hot laundry and march around the living room beaming. Later, wearing a prosthetic belly for my television show, I stroke it subconsciously with such natural ease that my best friend has to tell me I am creeping her out. All the men on the crew, usually brusquely focused on their morning duties, are extra sweet and careful with me. They look at me like I am carrying the Messiah, even though my stomach is silicone and ordered from Japan. I feel the innate power of pregnancy, and I look forward to the moment when my stomach swells naturally and isn’t made of the same substance as breast implants.”

But, she concludes, she has always known, in that mysterious way we feel things inexplicably in our own bodies, that she would not be able to have children.

The essay ends on a hopeful note — I recommend reading the whole thing — but it gives readers the sense that this is something that has changed Dunham forever.

Good luck, Lena, and thank you for your vulnerability. This is what celebrity is best used for.