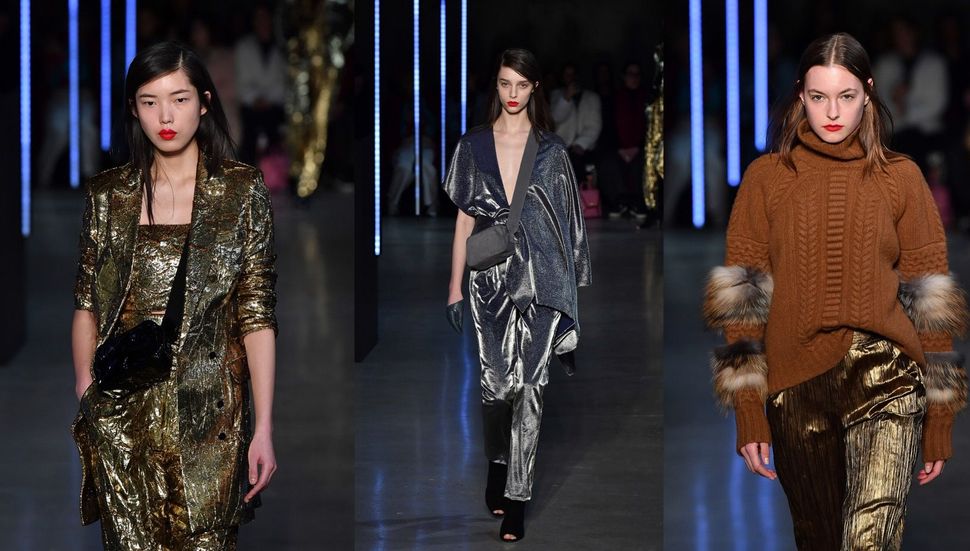 As climate change and political and social unrest threaten to upend the viability of life on earth, tech innovators like Elon Musk are trying to find other planets, like Mars, to colonize in order to preserve the human race. It is a goal predicated on hope — that even in an apocalyptic event, the human race will somehow survive.

Hope and its adjacent feeling — positivity — was the inspiration behind Sally LaPointe’s intergalactic themed Fall 2018 show. Beams of light hung from the ceiling, tiny bulbs blinking on and off at the hands of the show’s DJ who stood in the center behind a squared-off black booth.

But other than the techno vibe of LaPointe’s runway, there was nothing in this collection that was particularly “space-age-y.” Instead, LaPointe relied on the tried and the true; design signatures — like fur cuff details on easy, chunky knits, luxe fabrications in a neutral palette, the single color (this time, it’s red) that serves as the counterpoint to that neutral palette — were copious and omnipresent.

Sure, there were a few vaguely cosmic references: the silver lamé draped jumpsuit, the gold crushed velvet pantsuit, the sequins of every shape and size tacked onto languid pants, wrapped pencil skirts and fitted cocoon sleeve dresses.

And so the setting, instead of enhancing a well-made collection, undermined it. Edgy music and lighting for a staid, yet beautiful collection? It felt disjointed. It was a collection that tried to say something, but instead came across as hijacking a collective mood — one of finding hope in a dark, potentially disastrous world. But what kind of hope can be found in a collection that has been saying the same thing for years, with little variation? What meaning can be derived from stylistic tropes that have been recycled ad nauseum?

Again, that does not mean this collection is bad, or that it won’t sell: The clothes presented were well-made, flattering and effortlessly wearable. And there is something to be said for designers who remain consistent, who never veer far from their brand’s core DNA. But the success here was skin-deep: this wasn’t a collection that provided hope and light in the darkness. That message of positivity was all but obscured as the show ended and the vertical lights flickered off, shrouding the runway in darkness.