Jewish Couple’s WW II Love Letters Go Viral: ‘I Want You Now More Than Ever Before’ 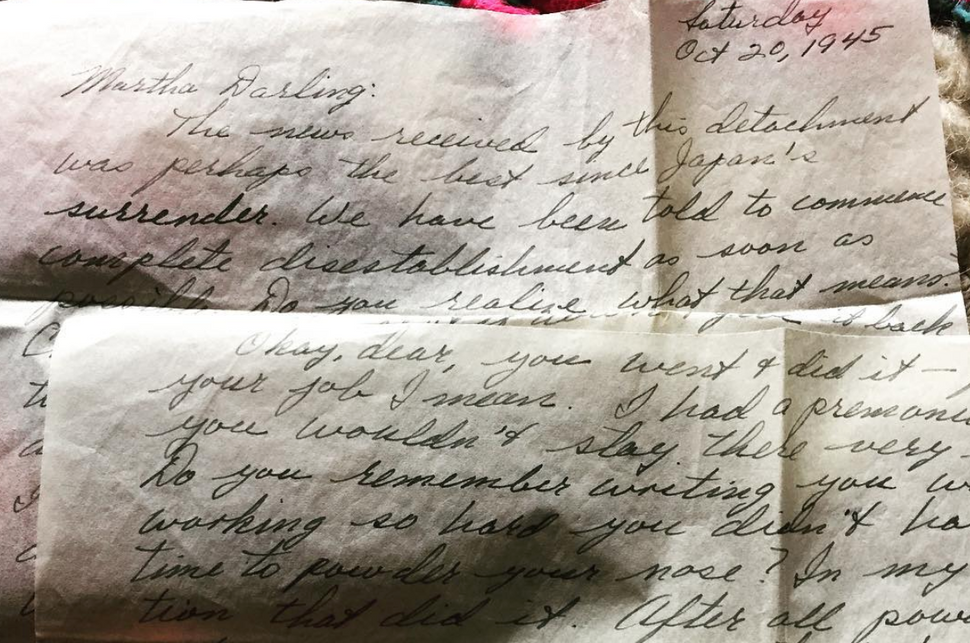 Bill Sontag and Martha Katz met on a weekend in Boston in the summer of 1945. They didn’t see each other again until the war was over. But by then, they were engaged.

According to Elissa Kravetz, her grandparents fell in love on paper. Bill, who was stationed in Panama, courted Martha through a series of handwritten letters addressed to “Martha darling” and marked with dates that span the last few months of World War II. When Bill died after 53 years of marriage in 2008, Kravetz kept her grandfather’s letters, considering them too painful to read. But this summer, she began to read them. And then, with trepidation, she began to send them to her grandmother. “So she can relive her love story once again,” Kravetz wrote.

Friday, August 24, 1945 Martha Darling, We had something that resembles a celebration this evening….one of the boys brought out his phonograph & about 50 records, some hot & others of the dreamy variety. The mood was set for reminiscence. Honey, all I could think of was you. It’s bad enough being so far from you, but when music intervenes to make it so much harder, I’m totally lost. I realize, I’m slightly inebriated but that makes very little difference in what I’m trying to express. Martha dear, it’s impossible to imagine how much I miss you. Sometimes I find it very difficult to put into words such as the case is now. Darling, I know I want you more then anything in the world. Staying awake & thinking of you half the night has made me realize that this Isn’t a passing fancy. I never felt this way before. Words are all I can write on paper but I hope my tongue isn’t tied in knots when I next see you. I love you dear, Bill Valentine’s Day poetry from my Papa to my Grammy. Circa 1945 #Love #LoveLetters #LettersFromBill ???

In June of 1945, at 23 years-old, Bill wrote, upon receiving Martha’s first letter, “Gee honey, you can’t imagine how much I long to see you. I miss you so darn much. Say, what have you got that has me so dizzy? At times I don’t know what it’s all about and more than once I’ve been caught daydreaming (thinking about you). I mean every word I said in this letter, so better beware. Love, Bill.” Kravetz says her grandmother, who receives one photocopied letter every week, hasn’t read the letters since she was a 21 year-old. “She feels like she’s falling in love with him all over again and I feel like he’s orchestrating this whole thing,” Kravetz told People. Kravetz has been sharing the letters on Instagram, where the intimate, handwritten notes (and one written on a “darn contraption” — a typewriter) have captured hearts young and old.

Kravetz says reading the letters has helped her feel like she is “getting to know” her grandfather in a new way after his death. And Martha? “[The letters] take me back to the old days,” she says. “I just love it.”

“I love you something awful,” Bill wrote, on the day his station was given command to shut down its base and return home. Martha, now in her 90s, recalls, while reading the letters, “He made me laugh, he made me cry, I loved him so very much.”

Jewish Couple’s WW II Love Letters Go Viral: ‘I Want You Now More Than Ever Before’