Disney Made History This Weekend — With A Bar Mitzvah 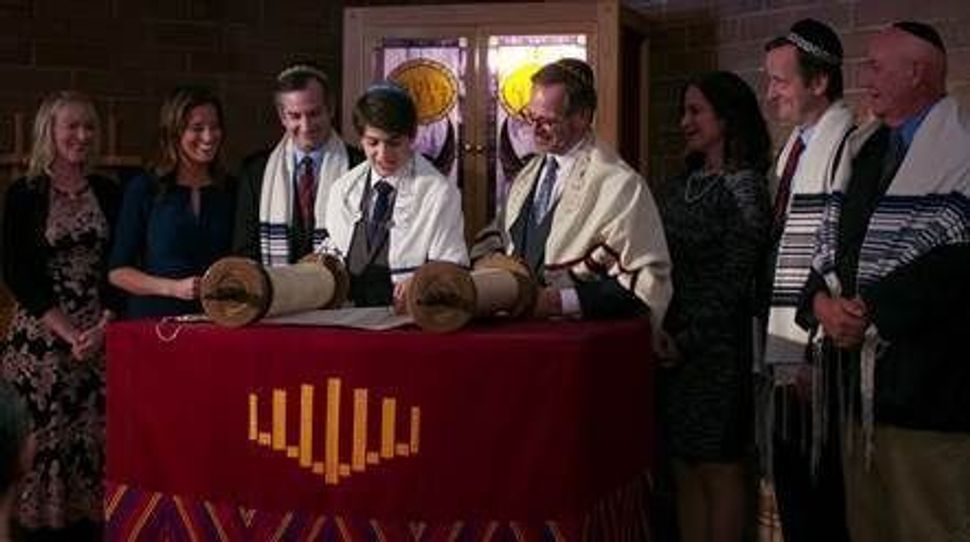 Mazal Tov! Dany Jacobs is to the bar mitzvah boy’s right, in the blue striped tallit. Image by Courtesy of the Disney Channel

Disney Channel aired a gay character’s bar mitzvah for the first time in the network’s history.

Not only did the popular kids’ program “Andi Mack” feature an hour long special dedicated to a bar mitzvah, but in addition, the character having the bar mitzvah was the same character who made headlines months ago as the first ever out gay character on Disney Channel.

That’s right — Disney is having a big, gay bar mitzvah and we’re all invited.(The episode aired on Friday night, but you can watch “Cyrus’ Bash-Mitzvah” on the Disney Website.)

Using a vast network of Jewish geography to get in contact, The Schmooze spoke to actor Danny Jacobs, who plays the proud father of Cyrus Goodman (Joshua Rush), the bar mitzvah boy. Jacobs, who does not watch “Andi Mack” (“I do not think I am its target demographic”), says that he did not find out until he was on set that the episode would be a shehechianu-worthy milestone. “It was a real honor when I found that out to be involved in something like that,” he said by phone, just hours before the show was to air.

Jacobs grew up at a progressive Reform synagogue in St. Louis, and according to his in-tribe expertise, the bar mitzvah ceremony itself was “very realistic — they had a rabbi on set,” he noted. Not only did the ceremony benefit from on-set rabbinic authority, but the actor having the bar mitzvah, Jacobs said, “recited the real haftarah portion he read at his own bar mitzvah.”

Jacobs knows from theatrical bar mitzvahs: At his, he took inspiration from the arts, seizing a recording of the show “Oh Gods,” which featured George Burns as God in conversation with John Denver. Having edited out Denver’s voice and recorded his own over it, during his bar mitzvah ceremony Jacobs interrupted his own d’var torah to say, “I’ve always wondered what it would be like to talk to God.” With a sudden flash of the lights (“My buddy was standing in the back”) and a thunder sound effect, the tape of Jacobs chatting with God played for the whole congregation. “The rabbis just let me do it,” Jacobs said, laughing. “In retrospect, it was a very progressive environment.”

So make like an early Reform Jew (the movement largely held b’nei mitzvot on Friday nights for many years) and join the minyan at Cyrus Goodman’s historic bar mitzvah. Jacobs hasn’t alerted his rabbis to his pivotal role in Jewish pop culture history yet, but he told me confidently: “My mom will DVR it.”

Disney Made History This Weekend — With A Bar Mitzvah