Disney Channel’s ‘Andi Mack’ Knows How To Do Judaism 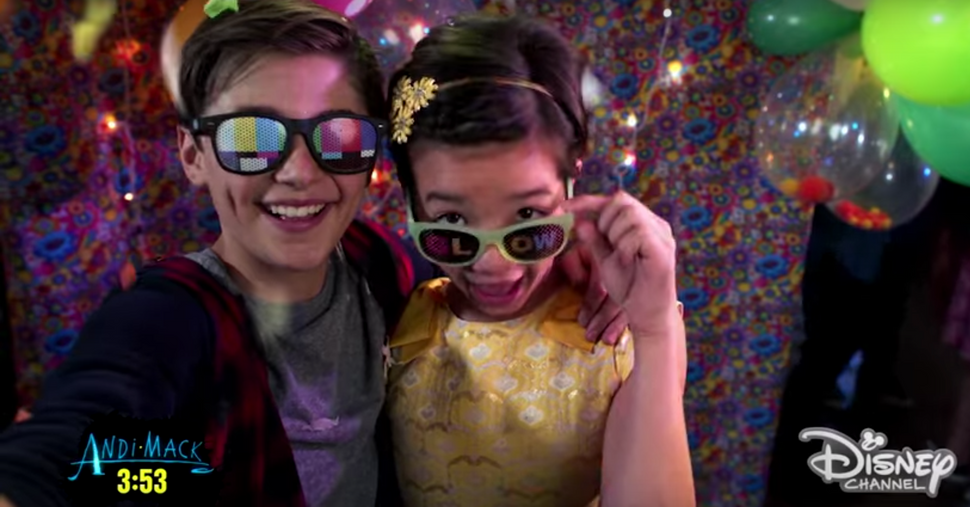 I want to start a Facebook page — SCALD: Single, Childless Adults Loving Disney — hoping I will find someone in my age range (50s) who is as into the Disney Channel as I am. I could probably sing the entire theme songs of its current shows and those that have been popular since the early 2000s.

Last year, I started watching a new show that I thought would be just goofy Nickelodeon fare but turned out to be, in my opinion, the best thing that ever happened to Disney Channel. I am talking about “Andi Mack.” This show has already introduced a number of “firsts” to the channel. We learn pretty early on in season one that the woman who the 13-year-old title character thought to be her free-spirited older sister, Rebecca “Bex” Mack, is really her mom, and that Andi’s maternal grandparents had been raising her. The show at first reminded me of a tamer “Gilmore Girls,” in terms of bohemian, friendlike mom versus strict, uptight grandmother. (Lauren Tom plays “Cece,” Andi’s grandmother. Any baby boomers remember her as Ross’s girlfriend Julie on “Friends”?)

There is no laugh track – thank goodness – and the characters are multicultural. Andi and her mom are Asian on Cece’s side and American on the paternal side. Andi’s best friend Buffy Driscoll is multiracial. Buffy is athletic and is motivated to be tough in order to honor her mother, who we later find out is in the military. Andi’s other best friend, Cyrus Goodman, is a sweet albeit somewhat neurotic Jewish boy who is in the closet (another first) and whose divorced parents are shrinks who married other shrinks.

On other Disney shows, if Judaism is referred to at all, it is as some kind of gag or stereotype, and seems gratuitous. In “That’s So Raven,” Raven-Symoné’s 2003–2007 series, money-obsessed Cory Baxter sees how much loot his Jewish friend gets at a bar mitzvah and tells his dad he wants to have one; when his father says he can’t because he is not Jewish, Cory comes up with a solution: He will have a bro-mitzvah. Another Disney program, “Bizaardvark,” has a short and nerdy Jewish character who will mention his grandma’s kugel and talk about the Christmas present he never got – because he is Jewish.

But “Andi Mack” is another story, entirely.

In a special hour-long episode last month we were treated to Cyrus’s “bash-mitzvah,” an authentic episode that included Joshua Rush, Cyrus’s portrayer, reading his real-life haftarah portion. Cyrus joined Andi and Buffy in a surprise hip-hop dance they presented for him, and, in a tear-jerker moment, he came out to Andi (with Buffy, whom he told months ago, at his side) — leading to the two of them commiserating over the enigma that is Jonah Beck, Andi’s sort-of boyfriend. On a side note, after the ceremony is done, Bex asks Andi if she is supposed to say “Matzo tov” to Cyrus.

Cyrus may be the show’s only Jewish character, but Rush is not its only Jewish actor. Asher Angel, who plays Jonah, is also Jewish, and Rush shared in his co-star’s 2015 bar mitzvah at a synagogue in Park City, Utah. Terri Minsky, the creator of “Andi Mack,” has appeared in the Forward’s pages (https://forward.com/opinion/7806/the-jewish-path-to-success/ Read more: https://forward.com/search/ ). Minsky has spoken at the Jewish Museum, in New York, about women in television, and she is the creator of several series, including Disney Channel’s “Lizzie McGuire” (which concluded its first season with Lizzie’s secular Jewish male sidekick having an impromptu bar mitzvah — a year late -– because he felt he was growing up too slowly) and the ABC comedy “Less Than Perfect.”

So, I say “Yasher koach” to Disney -– and Minsky — for finally doing Judaism right. Can’t wait to see what’s next. Unfortunately, Cyrus is too young to attend a Birthright trip, but perhaps he and his pals will attend a Goodman family bris?

Teri Zucker is the Forward’s copy editor. Contact her at [email protected]

Disney Channel’s ‘Andi Mack’ Knows How To Do Judaism