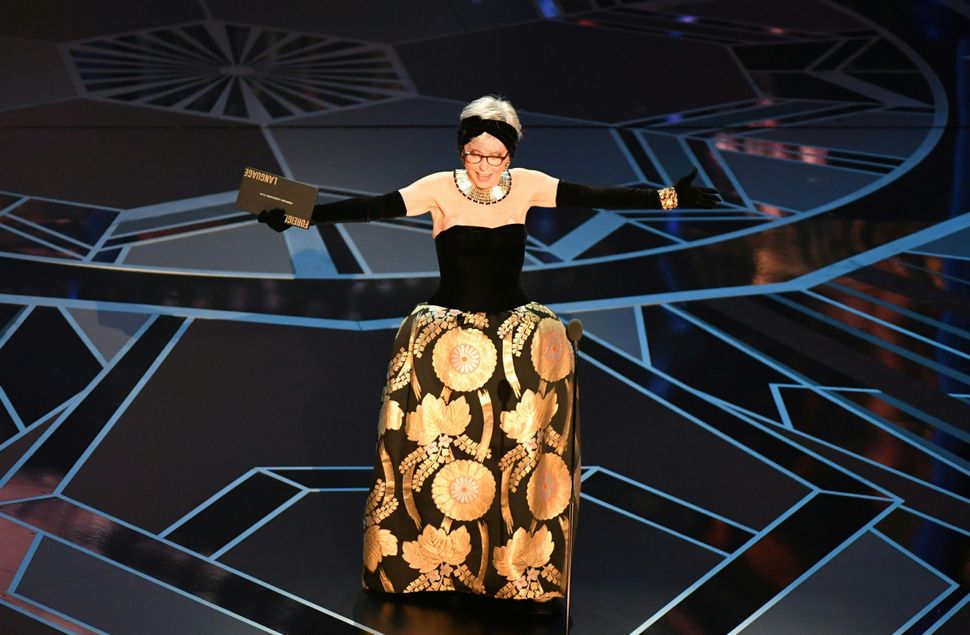 Casually tossing aside the taboo of recycling an outfit, Rita Moreno — who is supposedly of crypto-Jewish descent — wore the same dress to the Oscars that she wore 55 years ago. At the 1962 Oscars, for which Ms. Moreno was nominated (and won) as Best Supporting Actress for her performance in West Side Story, Rita Moreno wore a black halterneck dress with a skirt made out of a single piece of gold brocaded obi fabric.

For this year’s Oscars, she altered it a bit: the neckline was contracted, becoming a heart-shaped strapless dress. And unlike 1962, this year she went heavy on the accessories: earrings, a collared necklace, a bejeweled cuff, a turban headband. The only accessory that remained the same was the elbow-length black opera gloves.

Let’s reiterate — this dress is FIFTY FIVE YEARS OLD and Ms. Moreno still fits into it. I can barely fit into my clothes from last season. I can’t imagine fitting into an evening gown half a century from now.

And it hearkens back to a time when Hollywood starlets didn’t have stylists to help them look perfect on the red carpet. Red carpet style is increasingly commercial — few risks are taken and the result is boring. The bright sheen of an overly perfect image of glamour creates a sea of nameless, faceless design. Ms. Moreno’s look is unconventional and bold, it’s not particularly “fashionable” (see: opera gloves), and the disjointed styling looked dated.

Rita Moreno wearing the same dress she wore to the #Oscars 56 years ago = I ? CON ? IC. RG @nymag

But it was the inherent unfashionable quality of the dress that made such an impact, with outlets like The Cut going as far as to term the look “Iconic.” It was a bold gesture, one that took the kind of don’t-give-a-f*** attitude that comes with age. And the overall positive reaction to it is a testament to the idea that sometimes, maybe, the Best Dressed List is irrelevant. Wearing a gown filled with nostalgia and meaning that takes the idea of recycling clothes and sustainable fashion to a whole other level makes the case against glossy, if superficial, perfection.