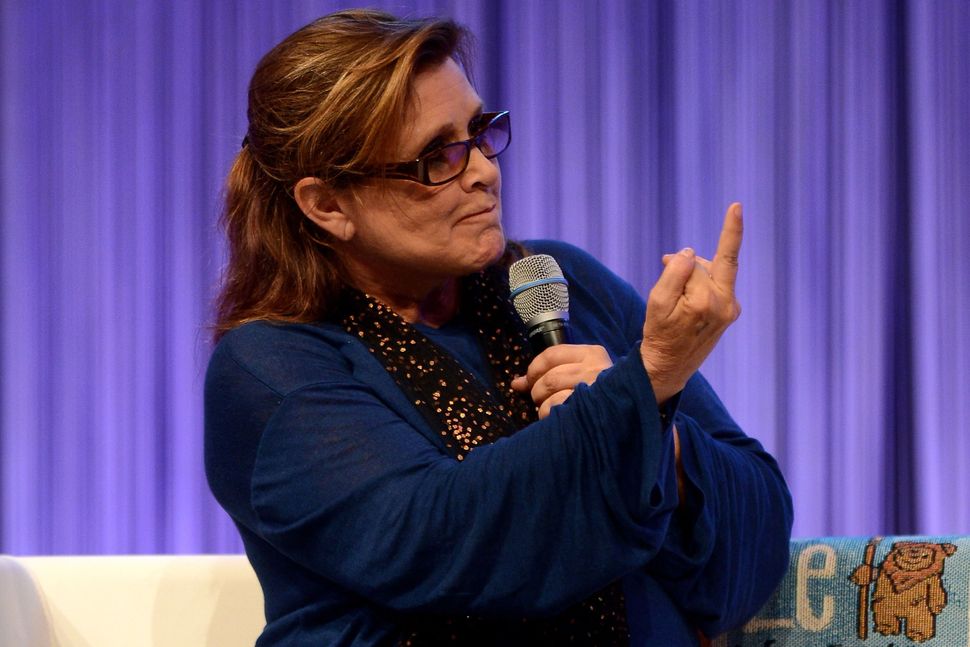 As the “Star Wars” franchise has taught us, anything can happen in space. A princess can become a senator, a spy, and a general. A neurotic robot can form an enduring friendship with a flippant droid. An orphaned scavenger can lead a resistance movement. Laser swords can be used alongside mental manipulation in an intergalactic war between good and evil.

But “Star Wars” has also taught us that only white men can tell these stories. On Thursday it was announced that Jewish director Jon Favreau will write and produce the new live action “Star Wars” television series. This means that the “Star Wars” franchise’s legacy of offering top writing and directing jobs exclusively to white men will remain pristine. As Variety notes, of the 17 films (existent or planned) in the 41 year-old franchise, just one has had a woman in a major creator’s role. That was Leigh Brackett, who wrote “The Empire Strikes Back” 38 years ago.

Me: Cool, how about some ladies or maybe someone who’s not white?

Lucasfilm: The white guys from Game of Thrones get a whole Star Wars trilogy!

Favreau, who gave the world not one but three “Iron Man” movies as well as that really great scene where Scarlett Johansson eats spaghetti in “Chef”, is no doubt capable. But perhaps another perspective could bring us away from the blandly predictable plots and tropes that “Star Wars” films have a tendency to lean on. There is a theory that the earliest and most magical “Star Wars” movies were saved by the brilliant editing of George Lucas’ wife, Marcia Lucas. And now the highest role at Lucas Films is occupied by a woman, Kathleen Kennedy. You know what they say — if two broads manage not to mess it up, maybe give a third a try?

Lucasfilm celebrating #InternationalWomensday by giving Jon Favreau a Star Wars trilogy is a weird choice. Is Kathy Kennedy trolling us?

Given the race and gender diversity in the cast of the most recent “Star Wars” movies, it is clear that the franchise is trying to do better. But as we know, the reality is do or do not do. There is no try.