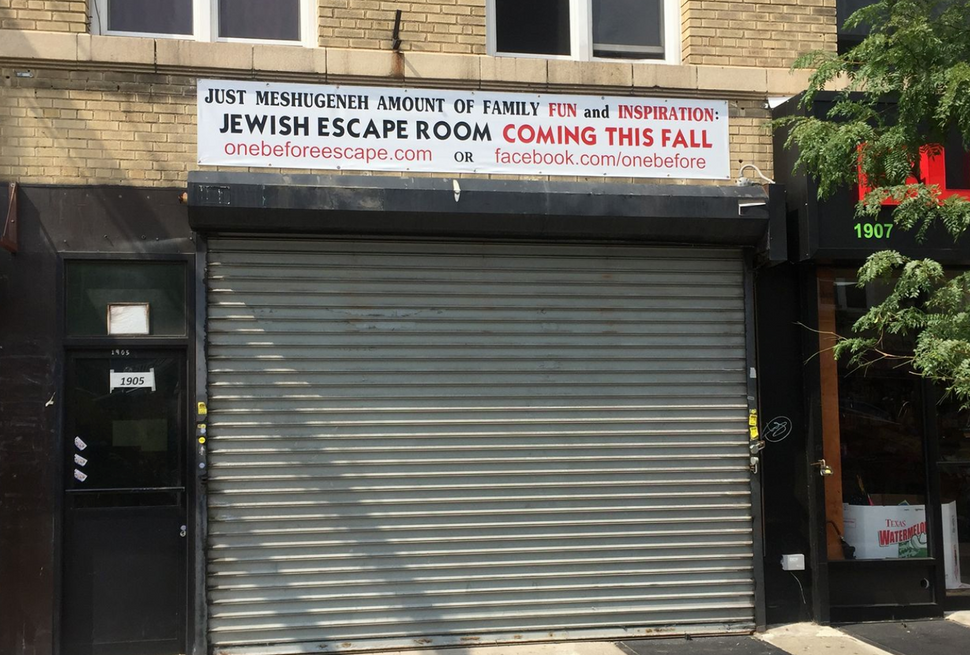 You know that awful nightmare you have where you’re stuck in Europe on the eve of the Holocaust and your family can’t get visas and you end up trapped in an attic, trying not to breath as SS soldiers march beneath you? Wild rumors are spreading throughout the Jewish world by ear and by Internet claiming that a Brooklyn escape room game will soon allow Jews to re-experience these collective traumas, for a small fee, of course.

Gamliel Beyderman, the Flatbush-based data scientist who is behind the “uniquely Jewish” escape room concept, has explained that the educational game will at no point feature a pogrom. Beyderman, a 40 year-old father of five who immigrated to America from Kishinev at 17, says he’s been concerned by the sensational rumors about the attraction. “Kishinev is famous for one of the most famous pogroms,” he said. “It would never cross my mind to subject anyone to that experience.”

In fact, the Jewish Escape Room game coming to Flatbush(“the heart of NYC,” as the promotional video bills it) is geared towards educating families. A banner outside the Brooklyn storefront claims it will provide a “just meshugeneh amount of family fun and inspiration.”

The truth, says Beyderman, who works for an advertising company (“my day job,” he laughs), is that developing a Jewish history-themed escape room activity is much more interesting than stories about the room’s distasteful contents. When Beyderman’s teenage son took a break from Yeshiva to visit an escape room, he returned home so inspired by escaping a makeshift submarine that he began building a personalized escape room in the family’s basement. Beyderman was intrigued to see how his son’s attention was held by solving puzzles and creating a narrative. “How could something like this keep a teenager going for so long?” he marveled. Watching his son create the life-size game, Beyderman wondered if this was an opportunity to combine his son’s passion with his own — a lifelong interest in Jewish genealogy, an interest he never had enough time for. “Most American Jews who are into genealogy are retirees,” he said. “It’s a hobby of people who don’t have to work. And,” he added, “people think it’s boring.”

Beyderman knew that in order to compel American Jews to learn more about their own genealogy, he would need to create an exciting game that personalizes history. He connected with another American genealogist, Dr. Jeffrey Mark Paul, who has traced his family history back to Shpola Zeide, an 18th century Tzadik of Shpola, and Rabbi Pinchas of Koretz, a senior disciple of the Baal Shem Tov and a direct descendant of Rashi, who is in turn believed by some to be a direct descendent of King David. The completed escape room will follow the story of that family from the Davidic period through the Medieval times, and then through the family’s escape from Russia ahead of the pogroms (hence the confusion about participants being attacked by a faux Russian mob,) to Ellis Island, and eventually to modern day Los Angeles.

“It’s an inspiring story — about how something can be redeemed from fire,” says Beyderman. “There’s nothing traumatic about it.”

Rats. Jews who wanted a chance to live their darkest fears in a Flatbush basement will have to settle for an educational experience. It’s tough, but if I know the Jews we’ll take any opportunity we can to revisit our own history while competing over which one of us is best at solving logic puzzles. See you there, in the “heart of NYC” come Fall.