We Tried ‘JoyBox,’ The First Subscription Box For Jewish Holidays 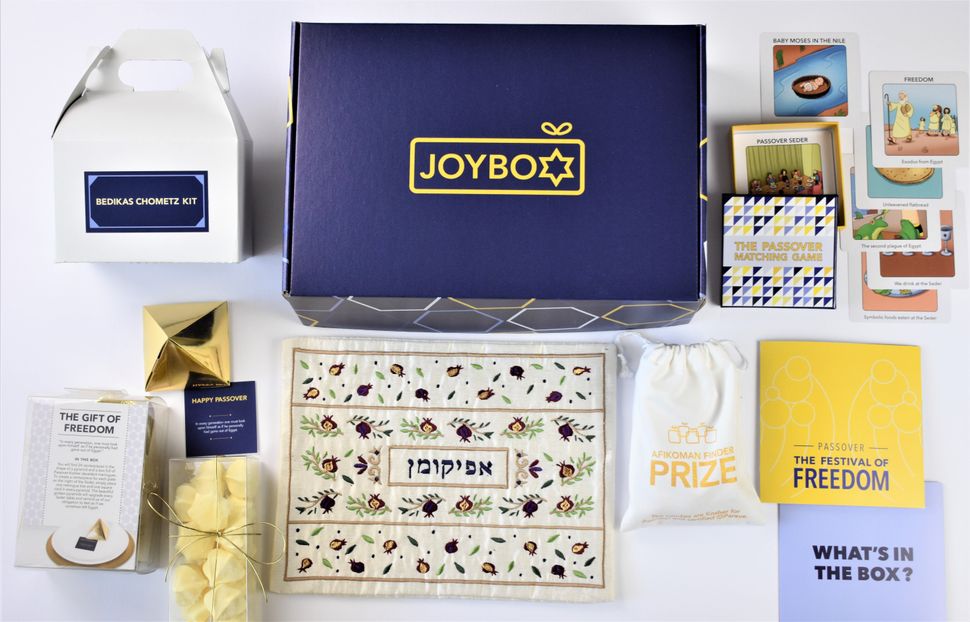 It’s 2018, and if you aren’t regularly mailing adorable gift boxes to yourself, you aren’t living. I’m speaking, of course, about subscription boxes, a fruit-of-the-month-on-steroids trend where one pays to receive monthly or quarterly packages in the mail filled with themed products — Korean face masks, exotic spices, meal kits — if it’s fun and frivolous, you can probably get it in a subscription box.

Shelly Arden, an Israeli-turned-New Jerseyan has created a subscription box just for Jews.

The JoyBox is designed to show up at your door just before each Jewish holiday, providing goods and goodies that are intended to make holiday observance joyous and convenient. “Living most of my life in Israel, I never realized how easy it was to raise my kids with a Jewish identity, it almost happened by itself” said Arden, who is a mother of two boys. But when Arden’s family moved to the US, things were different. She realized: “I need to be a lot more active about educating and practicing our rituals at home.” The boxes cost $49.95 individually, $45.95 each for an order of three, or $41.95 each for an order of six boxes. (You can use “PASSOVER” for a ten percent discount on the Passover box.)

All this sounds rather brilliant — but will finding a JoyBox at your door be as delicious and expedient as finding the afikomen? Or is it just another example of proto-spiritual capitalism that will crumble in our hands like aging matzo? The Schmooze received a complimentary Passover box in the mail. Here is our investigation:

The JoyBox arrived in one of those hefty cardboard boxes that instantly causes serotonin to release in the brain. It is covered in classy geometric designs that announce that it is Jewish yet chic. So far, so good.

The box came with a glossy manifesto explaining all of the things in the box, which is especially helpful because it defines terms like Bedikat Chametz (the ritual removal of leavened foods and crumbs from a home — Arden actually spelled it “Bedikas Chometz” but I don’t roll like that) and the concept of the afikomen. It also promises to give “the gift of freedom,” but we’ll just see about that. 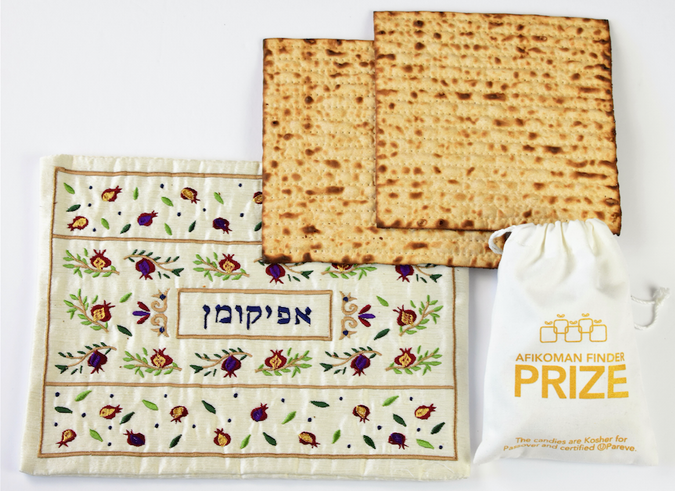 Image by Courtesy of JoyBox

This is the big ticket item of this box, and it’s lovely. Similar afikomen bags on Emanuel’s website retail for twenty-five dollars.

A Bedikat Chametz Kit This kit included a spoon, candle, baggies, and a feather for chametz gathering, as well as a baggie of kosher candy for the person who finds the most leavened food. I tried one of the jelly candies and I am pleased to report it was good, and soothing after the lentils fiasco. I did not try any of the lollipops because I have passed the point in life at which I want to suck on a hardened sugar bulb while a stick lolls out of my mouth. 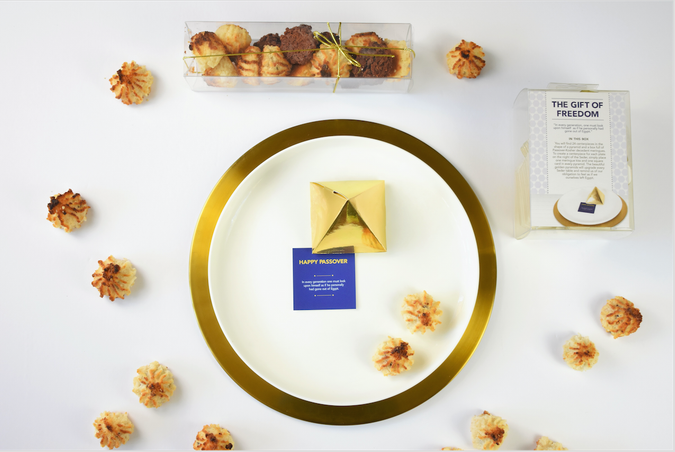 Image by Courtesy of JoyBox

Materials for 24 centerpieces This entails 24 pieces of shining cardboard that can be assembled into miniature golden pyramids, stuffed with kosher for passover coconut macaroons (also included,) and sat next to a tiny paper plaque that says “In every generation one must look upon himself as if he personally had gone out from Egypt” on each person’s plate. If you find crafting delightful or if you have guests who insist on being “given a job” or children who are dexterous yet underfoot, this is a great thing. Alternatively, if you are stressed out with minutes to go before your seder, you will probably not enjoy doing 24 pieces of low-level origami. However, the macaroons were unusually good.

A Passover Matching Game This is a glossy game of memory cards with Passover themes. Since everybody I asked in the Forward office said they did not have time to try the game, because it was “the middle of the work day” I played it by myself, like a Jew-y game of solitaire. It was a fine old time! I doubt that the cards are of such a quality that you will be able to pass them down to your grandchildren, but they will last you a Passover or two.

Another Glossy Pamphlet This pamphlet, which I am certain is nicer than any wedding invitation of mine will ever be, tells the story of Passover and expains the haggadah, matzah, the ten plagues, and the derivation of the name Passover. At a certain point it says, “Freedom: We all enjoy it, but we didn’t always have it.” I found this accurate.

When the Israelite slaves were redeemed from Egypt, according to the Torah, they made a festival to God in the wilderness, and we now call that festival Passover. The freed Israelite did not need a JoyBox to celebrate Passover, and neither do you. But it would definitely help. The JoyBox is a genuinely delightful way to prepare for the Jewish holidays, especially when that preparation usually focuses on deep cleaning your refrigerator and burning your favorite carbohydrates. In the wilderness that is pre-holiday preparation, think of it as your personal box of manna.

We Tried ‘JoyBox,’ The First Subscription Box For Jewish Holidays