Ivanka Trump Wears A Lab Coat And Gets Mocked By Internet 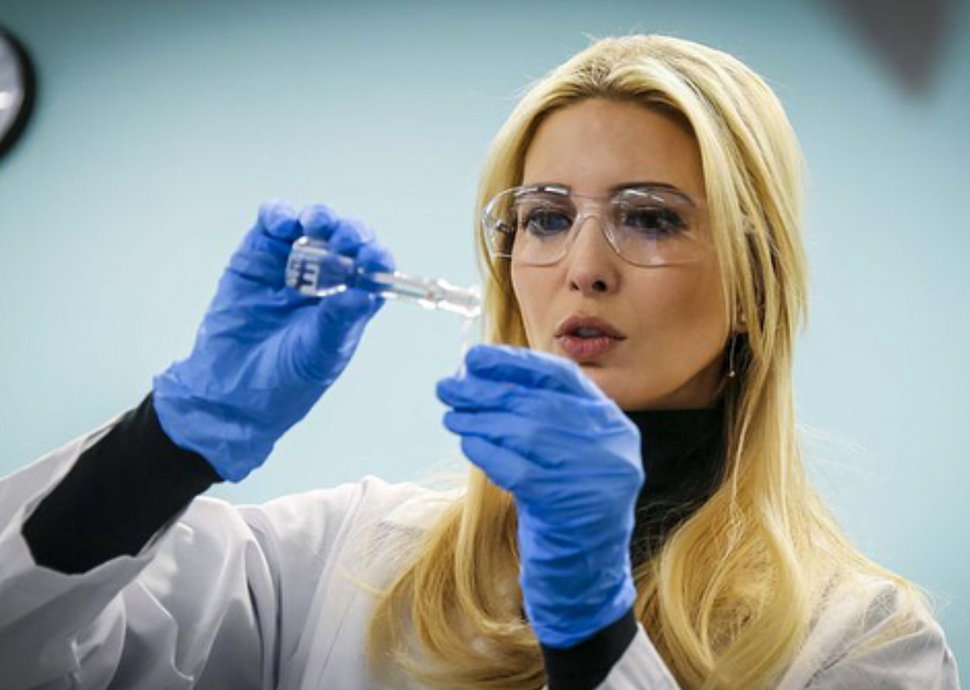 Ivanka Trump has the kind of polished elegance that wouldn’t be out of place at a country club or a cocktail party where the food goes untouched and the waitresses get leered at by WASPy Ivy-bros. Ivanka on a private plane? Checks out. Ivanka lighting the Hanukkah candles wearing couture? Sounds about right.

While visiting a lab in Waukee, Iowa to promote STEM education, Ivanka donned a lab coat, goggles and blue latex gloves on top of her sleek black turtleneck and professionally blown-out hair. But the image she posted of herself — mouth parted slightly, hair perfectly framing her face — as she tried some sort of experiment (the details of said experiment wasn’t clear) highlighted how out-of-place she looked. The gloves were too big, the sleeves of her ill-fitting lab coat were falling down her arm, and she held the pipette and glass beaker too close to her face.

Like this meme of Ivanka parting her father’s hair as she foils it to achieve Trump’s patented yellow glow:

Or this tweet from Colbert that points out the eerie resemblance Ivanka shares with Barbie:

Ivanka Trump is playing a scientific Barbie. Just like a real Barbie, she has no scientific credentials and the space where her heart should be is a hollow plastic shell. #LSSC pic.twitter.com/vjkDQwCJPz

Obviously, Ivanka was creating an experiment for her future Space X expedition to Mars:

. @IvankaTrump We see you are training for the Space Force. Tell us about your experiment. We want all the details. pic.twitter.com/Ua2PJk7Ub4

Or, perhaps Ivanka was trying to find the antidote to the Mueller’s truth serum?

But then again, we may be needlessly mocking her. After all, who could forget Joe Biden’s goofy grin while wearing head-to-toe sterile garb?

Let’s see: When John Kerry dressed up like a scientist, it was framed as Democrats loving science. When Ivanka Trump does it, she is dismissed with sexist “cosplay” terminology. pic.twitter.com/bqFV8WvV9h

But perhaps the best part of this image is what isn’t shown — the actual experiment Ivanka performed, where she extracted vape juice to test the nicotine content:

Ivanka Trump Wears A Lab Coat And Gets Mocked By Internet