Jewish Entrepreneurial Events Are Just Like Kiddush Except With Better Alcohol 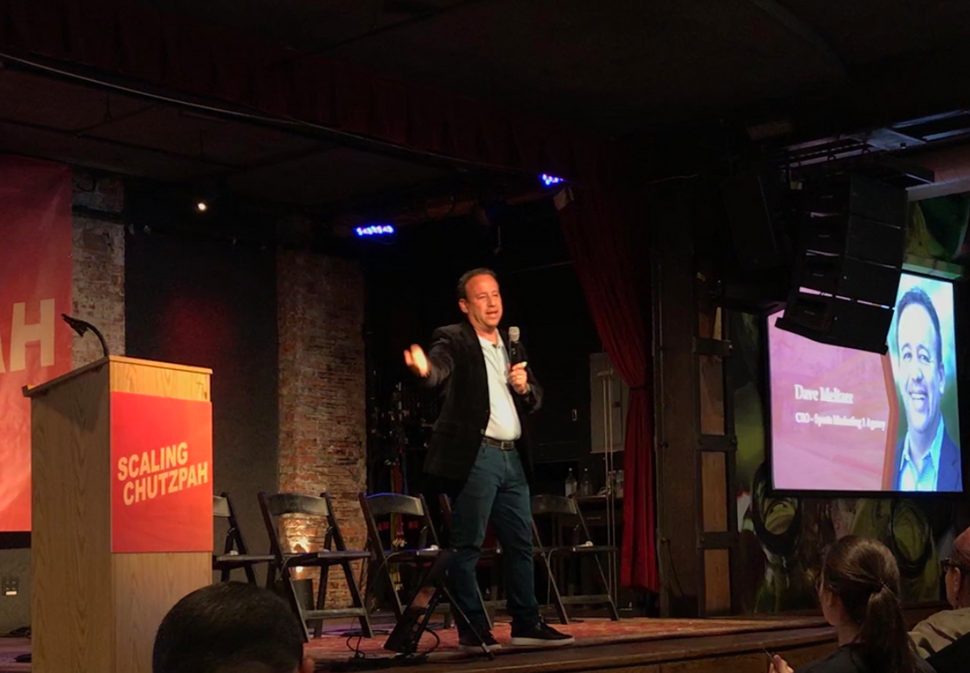 David Meltzer, CEO of Sports 1 Marketing, at the ‘Scaling Chutzpah’ summit at City Winer on 4/9/2018. Image by Twitter

Brooklyn accents; lots of people talking about how exactly they’re related to so-and-so, or how they made that seven-figure deal; reminders about the importance of tzedakah; all laced with some daytime drinking (in this case, a smooth white wine).

At the ‘Scaling Chutzpah’ summit yesterday, held in Manhattan’s City Winery and organized by Nan and Harold Klein of Teletime Video (full disclosure: the Forward was a sponsor) — Jewish entrepreneurs (and probably even more Jewish non-profit professionals because, let’s face it, this is New York) gathered (for $250 a seat) to talk about how they ‘leveraged chutzpah’ in building their businesses.

“The key is to pursue righteousness in the way that you make your money.” — @HonestSeth, Co-Founder of @HonestTea #scalingchutzpah pic.twitter.com/PyCuc9m7jS

And then there was Mississippi-native Laurie Ann Goldman (former CEO of Spanx) trying to pronounce ‘chutzpah’ with the right guttural ‘ch’, as she talked about the early days of the shape-wear company. She told about pitching the product to department stores like Saks and Nordstrom, and the nerve she had to muster to push her way in. “Act like you belong there,” she suggested to the audience. “Great salespeople are the ones who hear ‘no’ and think they hear, ‘maybe next time’.”

“Great salespeople are the ones who hear ‘no’ and think they hear ‘maybe next time.’” — @la_goldman, Former CEO of @SPANX #scalingchutzpah pic.twitter.com/KPXYijw2Cu

And then there were the expected cliches like “If you’re going to use chutzpah, make sure to do it as a mensch and not as a schmuck”, which solicited some polite laughs from the audience.

After six hours of Jewish business people talking into the mic about just how ballsy they are — you get the point pretty quickly.

But the action was happening less on stage and more in the mingling, clearly, as participants snacked on KIND bars and exchanged cards. Food, business deals, and perhaps even shidduchim: yup, sounds like kiddush to me.

Jewish Entrepreneurial Events Are Just Like Kiddush Except With Better Alcohol