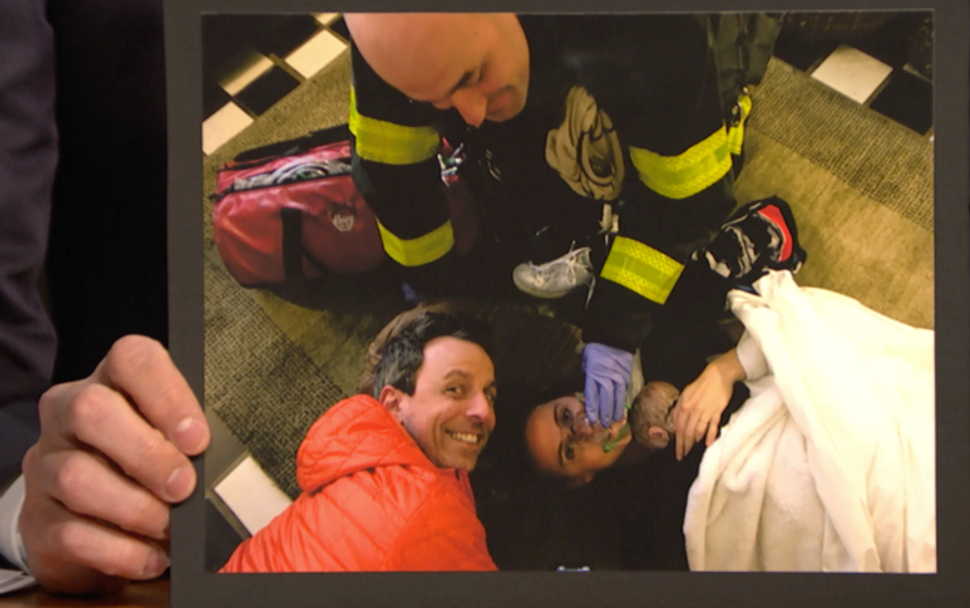 Image by Screenshot of Late Night With Seth Meyers

Mazal tov to the Meyers family!

“We get into the lobby of our building, I have called an Uber, the Uber is outside and we basically get to the steps of our building, walking out the steps, and my wife says, ‘I can’t get in the car, I’m gonna have the baby right now,’” Meyers said on his show, Late Night With Seth Meyers. The baby was born shortly afterwards, before the ambulance could make it.

The baby’s middle name holds special significance to the family. The maiden name of Alexi’s mother, Joanne, is in memory of Alexi’s grandparents who met the day after being liberated in Austria. A coincidence, as Israel’s Holocaust Remembrance Day is just two days away.

“I never met my wife’s grandparents, but I’ve heard so much about them,” Meyers said on the April 9 episode of Late Night with Seth Meyers. “They were Holocaust survivors who met the day after they were liberated. They met in the hospital in Austria… when someone was born, you just have an appreciation for everyone in your lineage who lived so that you can have this moment.”

He later added that he and his wife are happy to give their new child “this name for people who obviously had to work so hard to do that.”