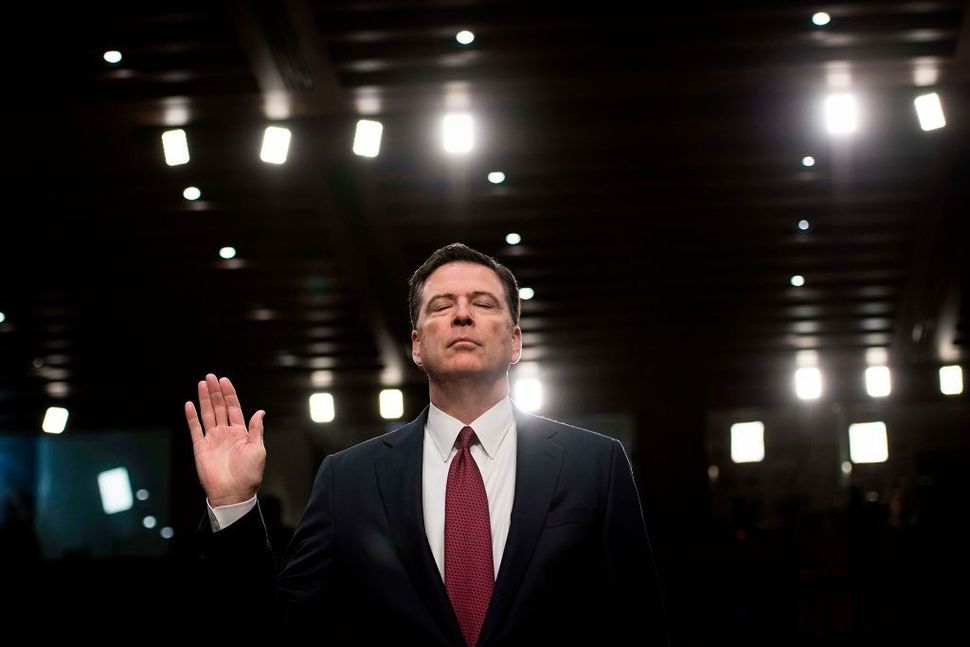 Stormy Daniels is going to have to get in line after James Comey as 2018’s least likely celebrity.

The former director of the FBI has launched a triumphant comeback. The 57 year-old was once regarded as a shifty-eyed bureaucrat who, arguably, maneuvered his role in the Hilary Clinton email investigation to influence American politics and world history forever.

Now, by dint of being victimized by the president, a sanctimonious new Twitter account, and an absurdly titled book, the man who once endorsed waterboarding as a terrorist interrogation tactic is enjoying the status of a folk hero and voice of the nation’s conscience.

Oh, America! I love the drama too, but remember, the enemy of your enemy is not your friend. Comey’s “Aw shucks, I read a lot of biographies and answer directly to the ghost of Abe Lincoln” routine is easy to fall for — especially with all of the Jewish references he’s used to pave his path back to respectability.

Mr. President, the American people will hear my story very soon. And they can judge for themselves who is honorable and who is not.

Like a brutally dumped boyfriend, Comey has long been enacting his revenge on his former boss via ludicrously pointed tweets. This is the equivalent of leaving Green Day lyrics as your AIM away message when you see your ex is online, except Comey was born in 1960 and his message is aimed at the President and the American people.

Now, in the wake of a book called “A Higher Loyalty: Truth, Lies, and Leadership,” which by all accounts is mostly breathless recollections of a single harrowing meeting in which Comey felt intimidated by a male superior (welcome to the club, babe) and his musings on urine, he is conducting a national glory tour. In the “By The Book” column of the New York Times, Comey represents himself as a moral leader and humble intellectual. Here are all the Jews he used to bolster that image:

1.The first book Comey lists in “By The Book” is “Grant,” Jewish writer Ron Chernow’s hefty biography of the Civil War hero.

2.In one of his many barbed allusions in the interview, Comey noted that he was “recently” struck by Jewish writer Jonathan Haidt’s book, “The Righteous Mind: Why Good People Are Divided by Politics and Religion.”

3.Jason Matthews, who wrote the “Red Sparrow” series, which Comey enjoyed, is not Jewish. However, he is worth noting because Comey says his books, which detail the life of an injured prima ballerina forced into a vicious life of Russian sexpionage, “nail the world of intelligence and counterintelligence.”

5.Asked what book he would require the President to read, Comey actually gets in an impressive burn. “The United States Constitution is not a book, so…” he begins. But then he ruins it by recommending “The Road To Character” by the tiresomely smug New York Times columnist David Brooks who is, nevertheless, Jewish.

6.If James Comey could invite three writers to a dinner party, his first pick, he writes, would be Jewish writer and businesswoman Sheryl Sandberg. He recommends her book “to the work force.” Sandberg would be joined by the reanimated bodies of ethicist Reinhold Niebuhr and Martin Luther King, Jr. “It would be really interesting to pick their brains about current events,” writes Comey.

8.Finally, last week Comey publicized his viewing of “The Band’s Visit” on Broadway, a musical about Israeli-Arab relations, or as Comey put it, “a musical about kindness, hospitality, and our common humanity.”

With this kind of comment it is exciting to imagine the major work Comey will surely do on behalf of immigrants, refugees, or impoverished Americans in the coming years. Just as soon as he’s finished his book tour.