What Does Natalie Portman’s Style Tell Us About Her Shifting Jewish Identity? 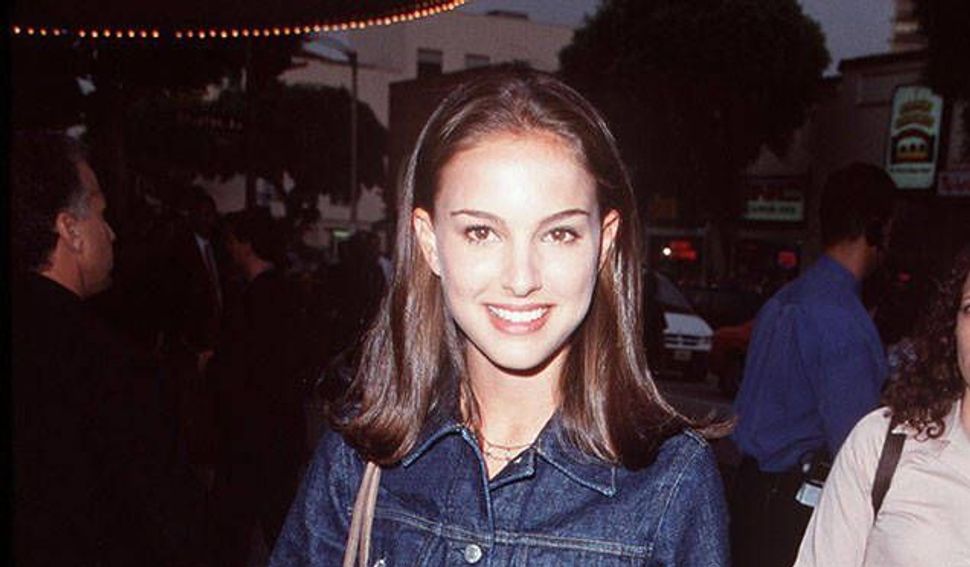 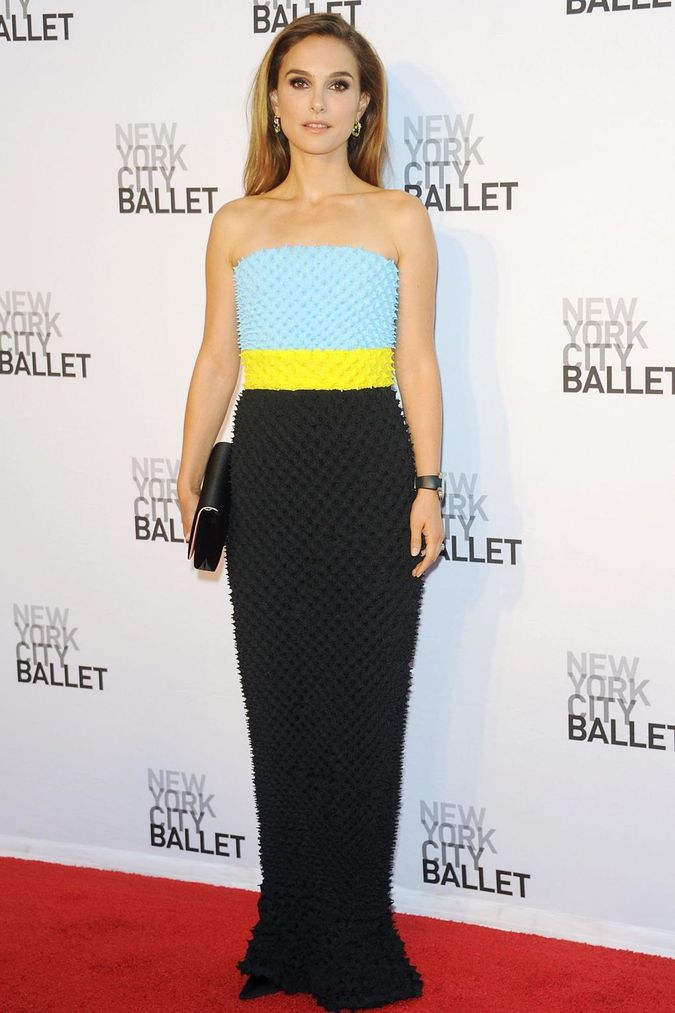 People are shocked (and I mean, shocked) by Natalie Portman refusing to come to Israel to accept the Genesis Prize. Something about that pesky right-wing Prime Minister who Americans hate but for some inexplicable reason, Israelis just keep electing him.

In any case, the signs of Natalie Portman’s wishy-washy attitude on her birthplace were there all along, written all over every outfit she chose to wear on the red carpet, or off it, but we just refused to see it. Probably because it was easier to talk superficially about how amazing she looked rather than explore the deep, meaningful psychological motivations behind each choice. Hindsight is always 20/20, so they say. Which is why we’ve compiled a list of some of the outfits that portended this cataclysmic event. 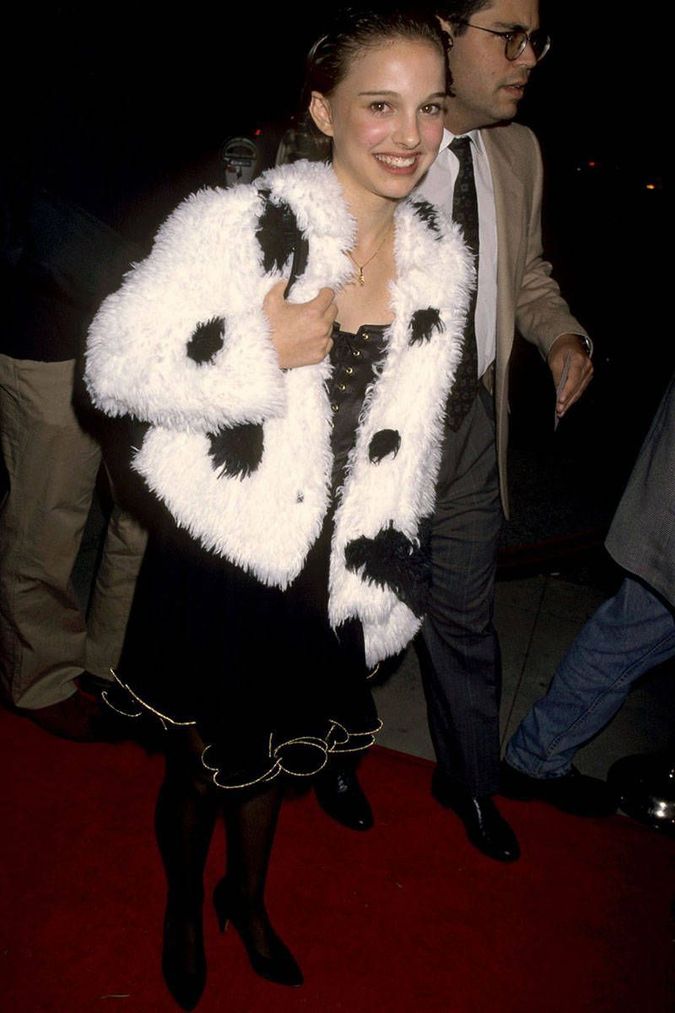 The year was 1994 and Natalie Portman was a young ingenue of 13. It was a simpler time: she wore a laced-up bustier, signifying her budding sexuality, yet demurely covered it up in a Cruella DeVille-inspired white-and-black spotted furry coat. True, she looked innocent, but if you truly looked within the fuzzy threads, you could see her questioning her nationality. There was a duality: was she American or Israeli? Could she be both? Notice how the spots of black are small, but significant. The niggling doubts were overshadowed by the snowy white innocence of youth, but it was still there. 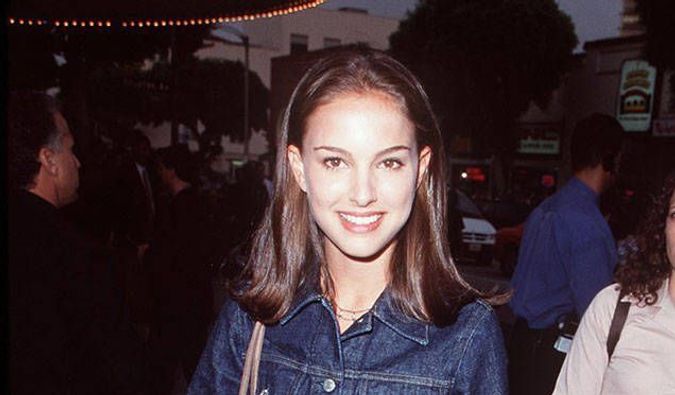 Fast forward four years, and Portman looks like an Ultra-Orthodox school girl. Her modest below-the-knee dress paired with a denim jacket says, “I’m religious and proud of it.” Which would make sense if she were, but as far as we are aware, she definitely wasn’t. But it was most likely a nod to her Jerusalem roots. She might have been yearning for the lost connection that comes with making yeridah (the opposite of Aliyah). Which may explain why, the following year, after enrolling in Harvard, she became active in the campus’ Chabad and was Alan Dershowitz’s research assistant. 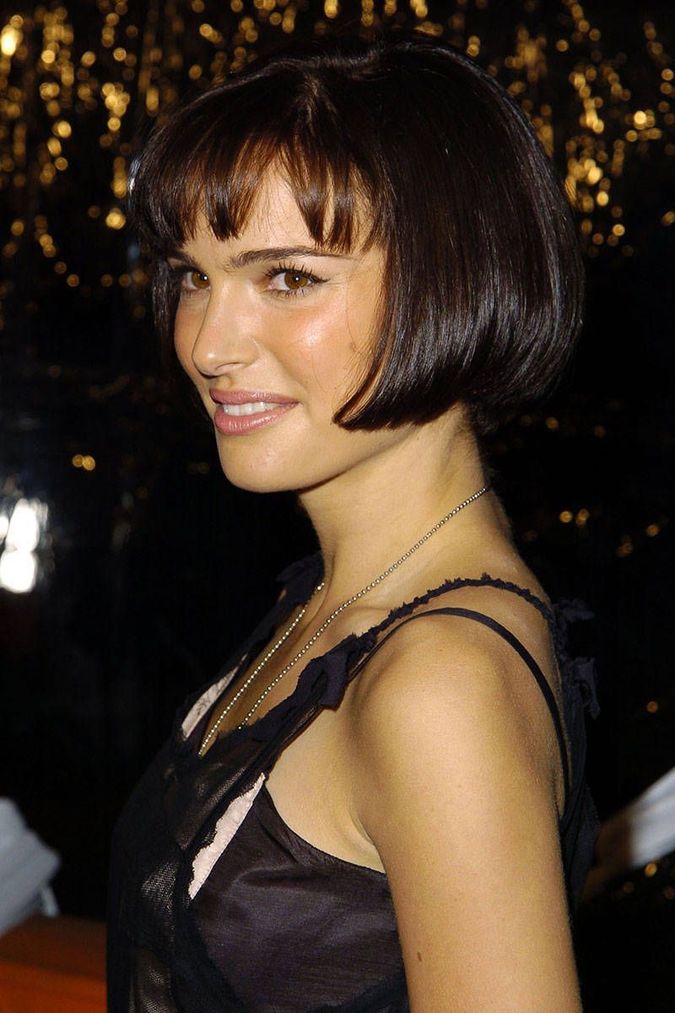 As a newly minted college grad, Portman was ready to explore who she really was. Specifically, a more femme fatale image of herself with a Gatsby-style bob and lacy, boudoir-style dress. This photo was taken a couple of months before she jetted off to Israel to take a graduate course at Hebrew University, so she hadn’t totally fallen off the wagon. But it’s clear she was experimenting with a darker side, which also reveals the way she viewed Israel-related issues: an understanding of Israel’s darker, more sinister actions. Perhaps it was a way to justify her relationship with the contested country? A visual, “hey, Israel is bad, but it’s like the good kind of bad, a sexy bad.” But it’s still an acknowledgement of Israel being bad which, for Israel purists, is heresy. But so was the acknowledgement that Natalie might not be the pro-Israel soldier they thought she was, and look how that turned out. 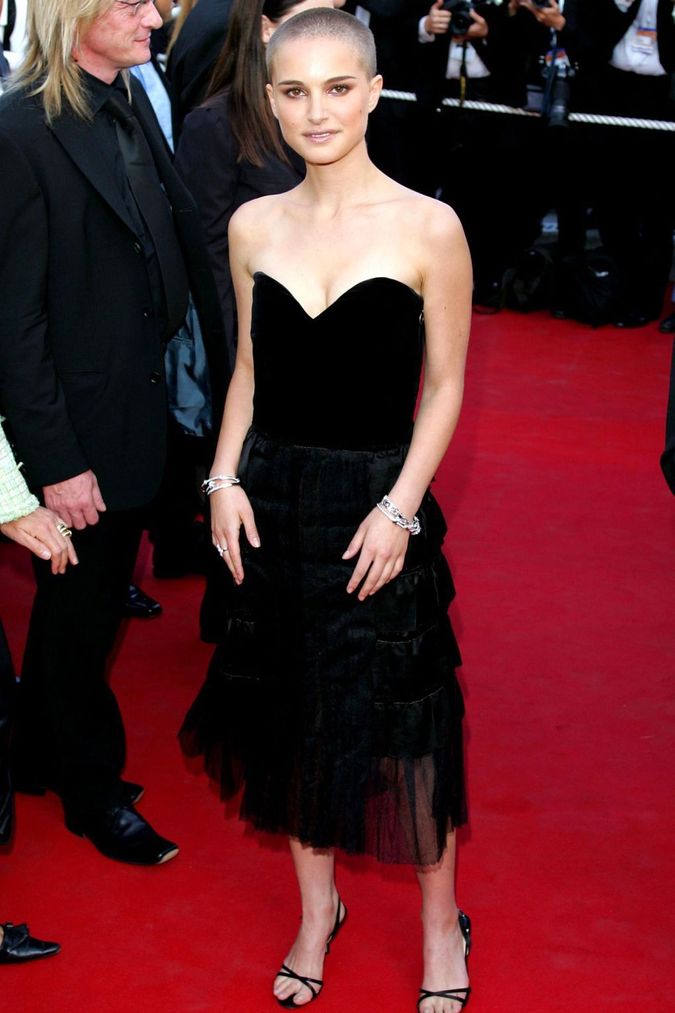 By 2005, Portman was A SERIOUS ACTRESS, whose dedication to the art of acting was reflected in the peach fuzz of Portman’s newly shaved head, which she did for the film V For Vendetta. Never has an actress looked so good with no hair, her delicate, elfin features making her look more like a beautiful alien and less like a drunk troll. In religion, shaving one’s head is an act of devotion. And in Portman’s case, it was a sign of her devotion to the shrine of Hollywood. Was her shaved head a sign of her shorn connection to Israel? Was she shearing her blind allegiance to all that Israel does? We shall never know, but, in my professional opinion, it certainly appears so. 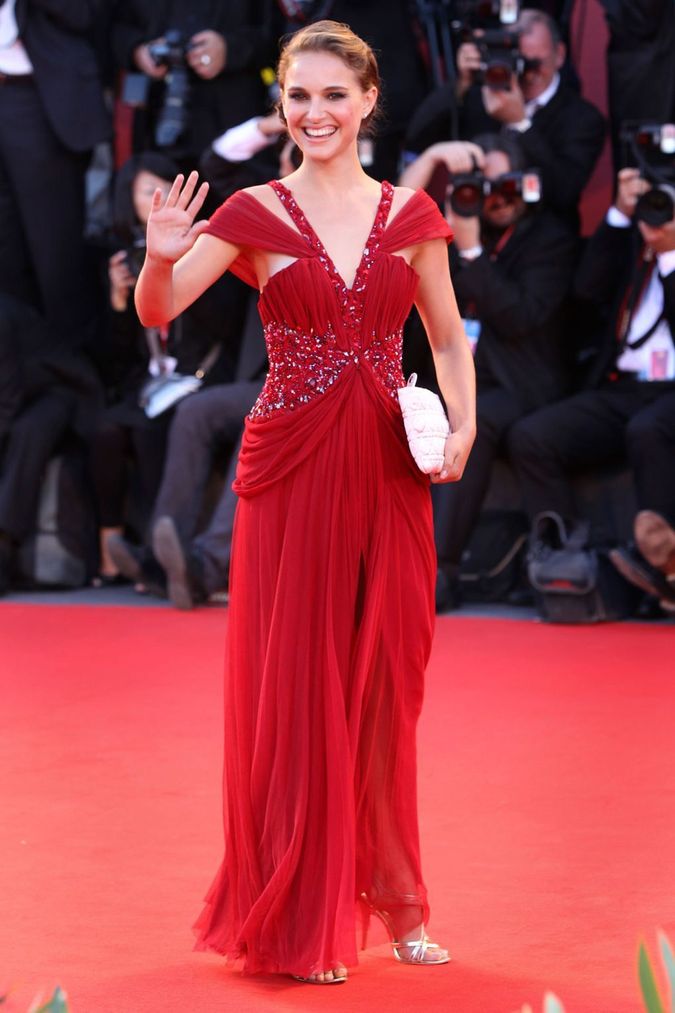 The premiere of Black Swan at the Venice Film Festival on September 1, 2010

After her hair grew back, Portman wore a red Rodarte gown to the premiere of her film Black Swan. This gown is significant for many reasons, specifically because it was worn after Portman met and fell in love with the film’s choreographer, Benjamin Millepied, who, despite the very Jewish-sounding first name is very not Jewish. It was yet another layer of Israeli-ness that Portman shed in dating (and eventually marrying) Millepied — a country where intermarriage is rare. She had become a true Diaspora Jew, and her brazenness in accepting that role is reflected in the fiery red of her chiffon dress. The dress’s Grecian draping also harks to the assimilated Hellenization of her character. The ties in her dress form graphic cuts — like the slashes to her heritage that must have been percolating in her mind. I mean, this dress is practically screaming, “I Will Not Go To Israel To Accept That Dumb Genesis Award, You Cannot Make Me!” 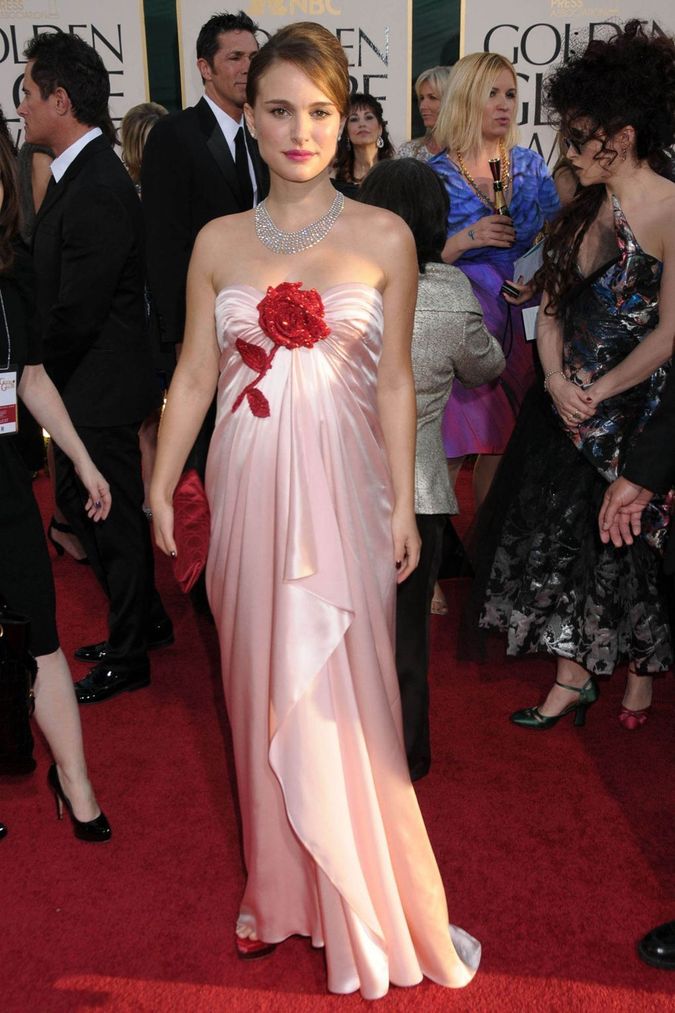 Portman at the 2011 Golden Globes wearing a Victor & Rolf gown

By 2011, Portman was knocked up with her first child, Aleph. But as A SERIOUS ACTRESS, she was about to do an awards show sweep, winning a Golden Globe, a Sag and an Oscars award for Best Actress for her performance in Black Swan. And to accept her Golden Globe, Portman wore a pink silk charmeuse Victor & Rolf gown that fell over her pregnant belly like the nimble fingers of a waterfall. It was another Grecian look, evoking an ancient, toga-clad statue, as if Portman tied a (really luxurious) bathrobe across her chest. To be fair, the Grecian look was very in, but it just underscores how deeply her American identity was entrenched. And then, across the chest, was a red rose embellishment. Sure, red roses are a Victor & Rolf signature, but the fact that Portman chose the dress is clearly VERY significant. Roses are an expression of love, and she was expressing love for her future child and Millepied. But you know what it wasn’t expressing love for? Israel, that’s what.

What’s blue and yellow and black all over? It’s definitely not the Israeli flag, but it’s the color scheme of the color-blocked Dior couture gown that Portman wore in 2013 to attend the New York City Ballet Fall Gala. The color-blocked design of the columnar gown evokes a flag, specifically the flag of the Bahamas. It’s possible she just liked the dress, but it’s way easier to ascribe sinister intentions. For example: Portman would rather look like she comes from the Bahamas than show loyalty to her birth country. To be fair, the Bahamas is really warm and sunny and their beaches are spectacular. But I digress. Besides, the dress is full of fabric spikes: alarming but harmless. Which was a clear sign that there was more bite to Portman’s seemingly non-political attitude regarding Israel and its policies at that time. This was the dress that Portman showed the world what she truly thought of that damned country. But Israel lovers were too much in her thrall to notice a thing.

What Does Natalie Portman’s Style Tell Us About Her Shifting Jewish Identity?