Rachel Weisz: ‘We Shouldn’t Have To Talk About Women Like They’re Some Endangered Species’ 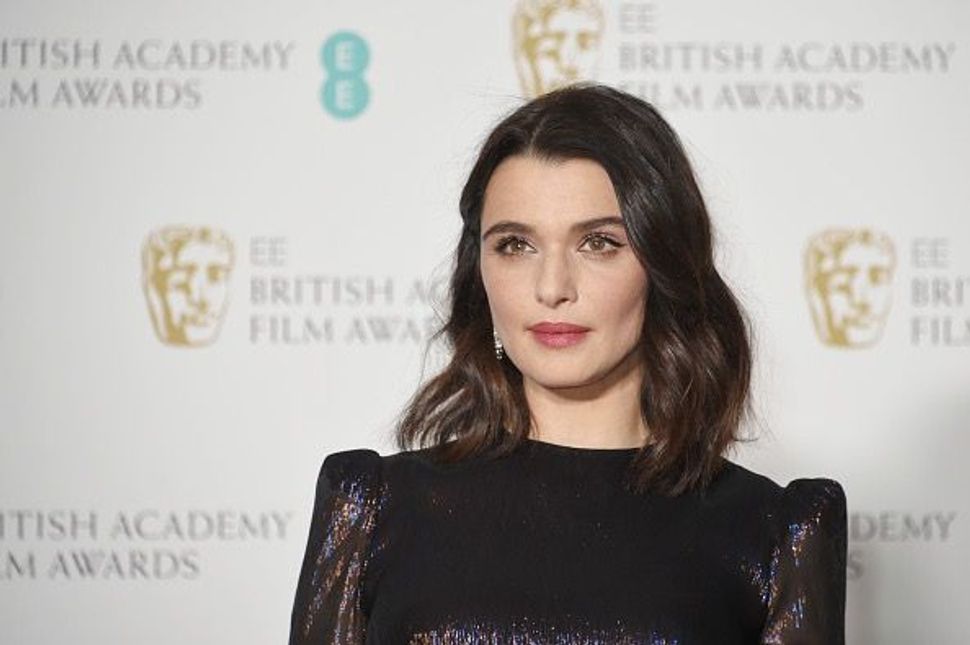 I arrived late at the 92nd Street Y on Monday night, leaping out of my Uber and jogging into the lobby of the historical building, where three separate women were yelling at security guards in the glowing light of flat screens advertising summertime programming. Film star Rachel Weisz was somewhere in the building, waiting to be interviewed by professor Annette Insdorf, in advance of Weisz’s Orthodox sexual drama “Disobedience,” which the actress produced and stars in.

I found an empty chair, sandwiched between a woman who was simultaneously conducting a business call and eating a snack-sized bag of popcorn, and two friends who each found time to use the word “shande” in conversation twice before I took off my jacket. At 8:09 PM, the room quieted. The woman next to me opened a fresh bag of SmartPop.

Have you ever seen a very famous actress or actor in real life? Often, they are smaller and more sallow-looking than they appear on screen, and they look disappointed to be wherever you are. Rachel Weisz was not like that. She was wearing a clementine-colored ankle-length dress and metallic strappy high-heeled sandals, with silver hoop earrings that worked in perfect proportion to her face. She looked radiant. Annette Insdorf, the moderator, introduced Weisz using both the word “horny” and the phrase “mouth-play” in the first one minute. The room darkened, and a clip of Weisz describing Nazi murder tactics played on a projector.

The clip, which showed Weisz in the 2001 movie “Enemy At The Gates,” was followed by a clip of Weisz with Gene Hackman in “Runaway Jury” in 2003 and “The Brothers Bloom” in 2008, an uncharacteristically comedic role for Weisz. Insdorf, who has the voice and presence of a “Saturday Night Live” comedian doing an impression of an NPR correspondent (in a nice way,) asked Weisz if she ever considered doing more funny roles. “I’m not a comedian,” Weisz responded, smiling. The rest of the evening followed in a similar pattern — Insdorf’s questions were interesting, Weisz’s answers were gracious. Trying to understand artists by asking them direct questions almost never yields anything, but it was still compelling watching an artist and an academic try to make themselves understood to each other and to us, the audience.

“You born to a psychoanalyst from Vienna and an inventor from Hungary,” Insdorf observed. Weisz acknowledged that it was true. “Since you’ve played such notable Jewish characters…how important is your Jewish identity to your professional life to the roles that you play?” Insdorf asked, so helpfully that I felt like I had bribed her. But Weisz demurred, in the way actors almost always do. “I haven’t actively sought them out,” she said, which seems not totally true considering that after playing several other specifically Jewish roles she optioned Naomi Alderman’s Orthodox-themed novel “Disobedience,” produced it, and cast herself in a starring role. “For me, acting is a sort of shape shifting and a kind of escape-ology,” Weisz continued. “I’m interested in playing people from all different backgrounds, some which overlap with my life, some which radically don’t.” Then Insdorf said something endearingly derisive about Weisz’s role in the reboot of the franchise “The Mummy” with Tom Cruise. “‘The Mummy’ is my greatest film,” Weisz said, coldly. “I’m actually quite proud of it.” And then she grinned.

Several times throughout the evening, Weisz was induced to talk about feminism and women in film. After a clip of Weisz in “The Whistleblower,” a movie about the real police officer Kathy Bolkovac who was fired for reporting a sex-trafficking ring in Bosnia while under contract with the UN, Weisz spoke about Bolkovac’s quiet heroism. “I love stories of people who think they’re ordinary doing the extraordinary,” Weisz said. “It wasn’t a question to her that she had to do the right thing. I just wanted to get her spirit. I hope I got her spirit.” Weisz did not elaborate on the situation of women in movies or sex trafficking. She looked contemplative and said that of all her movies, “The Whistleblower” is one she would recommend. Insdorf asked if Weisz, like another of the real women she has played, Holocaust scholar Deborah Lipstadt, feels like all she has is her “voice and conscience” (a line Weisz says as Lipstadt in the film.) “My job is very different to Deborah Lipstadt,” Weisz said. “She’s a historian and she has an ideological responsibility and a moral responsibility. I prefer characters where there’s a moral contradiction. I’m interested in characters who have appetites for something.”

A moral contradiction had occurred earlier in the evening when Weisz spoke glowingly about actor Dustin Hoffman, whom she co-starred with in the 2003 movie “Runaway Jury,” alongside Gene Hackman. “They were both legends,” Weisz recalled. “Dustin was very — I’d actually worked with him once before and he’s the kind of actor who’s wonderful for other actors. He’ll stand offscreen and start improvising and make you blush.” Insdorf inquired further. “My character was not particularly into him,” said Weisz. “And he said things to me like, ‘say that like you love me.’” She blushed. “He says crazy things offscreen. Dustin was being kind of a mischievous, improvisational creature. He’s a bit of a creature.” Weisz did not reference, and Insdorf did not ask about, the several accusations of sexual harassment leveled at Hoffman earlier this year by young actresses who have shared a set with him.

Weisz spoke warmly about another of her former co-stars — Bill Nighy (who — I must tell you so this anncdote will not be ruined for you — has never been publicly accused of sexual assault.) Weisz played his romantic opposite in the movie “Page Eight,” and speaking about it she enthused:

I’d known Bill as a fan from when I was 15 and my mom bought me tickets to see “King Lear” at The National Theater — my mom was very concerned with my education. I remember seeing Poor Tom come on, and it was like seeing Mick Jagger do Shakespeare. I used to go see him at plays and try to meet him at the stage door. I was a proper fan. To kiss him was rather extraordinary.

Weisz, who brought up former collaborators’ talents throughout the evening almost compulsively, spoke with similar earnestness about director Terrence Davies, her director in 2011’s “Deep Blue Sea.” She said, “His filming was very controlled — there was no physical freedom you had to find the freedom inside.” Weisz added, “I guess the feeling I had working with him was that’s probably what it felt like to be a woman in that period — her search for freedom and the way Terrence filmed it where i felt very restricted just made a great cocktail for me.”

Weisz’s gift for playing outwardly restrained, inwardly roiling women will be on display once again in “Disobedience,” starting Friday. Starring as an “off-the-derech” woman from an ultra-Orthodox community in Northern London, Weisz’s character returns home for the first time in years for her Rabbi father’s shiva, and reunites with her former lover, the married Estee, played by Rachel McAdams. Weisz, who co-produced the movie, said she selected Chilean director Sebastián Lelio, the recent Oscar winner for “A Fantastic Woman” as director because “He put a woman’s subjectivity front and center — women who are usually marginalized.” In the movie, Weisz says, “the antagonist is within.” Speaking of within, Insdorf asked if Weisz or Lelio watched “any films that had done a great job of depicting love scenes between women” to prepare for “Disobedience.” Weisz said no. But then she added, “We took a day to shoot it. And Sebastian storyboard-ed it, which he didn’t do for anything else in the film. It was like a sexual grammar that he created.” When Insdorf pressed forward, Weisz added, thoughtfully, “There was no nudity on screen — it was one woman’s face in pleasure, and you had to imagine the other woman’s face, fingers, tongue…which to me is more erotic than naked bodies.”

In a brief question-answer segment at the end of the evening, an audience member stood up and said that she, as a formerly-Orthodox woman who is now out as gay, wanted to know how Weisz felt about the triangular dynamic between her character, her lover’s character, and the lover’s husband. “I was talking to Rachel McAdams,” Weisz responded, “And she said she felt that Estee had managed to find a loophole in her religion — that she figured out that God loved her enough to allow her to be disobedient.” The audience member stood, peering at Weisz. “When she said a loophole,” Weisz continued, “I thought, ‘Oh! She actually is Jewish!’ Finding a loophole — it’s Talmud. I thought — this beautiful creature from Canada has actually become Jewish.”

The evening came to an end, though not before an audience member asked Weisz one more time about women in film. “It’s a very valid and important question that people are interested in telling more female subjectivity” she said, sighing. “I do find myself overcome by the absurdity that we have to talk about women like were some endangered species – we’re half the planet!” She added, “I love stories by men, about men, but I’m limited in my roles — I can mostly only play women.” Insdorf pointed out that Weisz is soon to star in “The Secret Life About Doctor James Miranda Barry,” a woman who lived her life as a man in 19th century Cape Town, so she could work as a surgeon. Weisz acknowledged this and laughed.

Rachel Weisz stood up, glossy black hair flowing around her silver earrings, and made to leave the stage at the 92nd Street Y. “Is she pregnant?” the woman next to me asked, dropping popcorn out of her purse. “Yes,” I said. Weisz had announced her pregnancy, with her husband Daniel Craig, that very week. “I’m so glad she’s pregnant!” the woman said, staring at Weisz. “Otherwise I would be like — what happened?” She left, spewing popcorn in her wake.

“Disobedience” is in theaters this Friday, April 27.

Rachel Weisz: ‘We Shouldn’t Have To Talk About Women Like They’re Some Endangered Species’