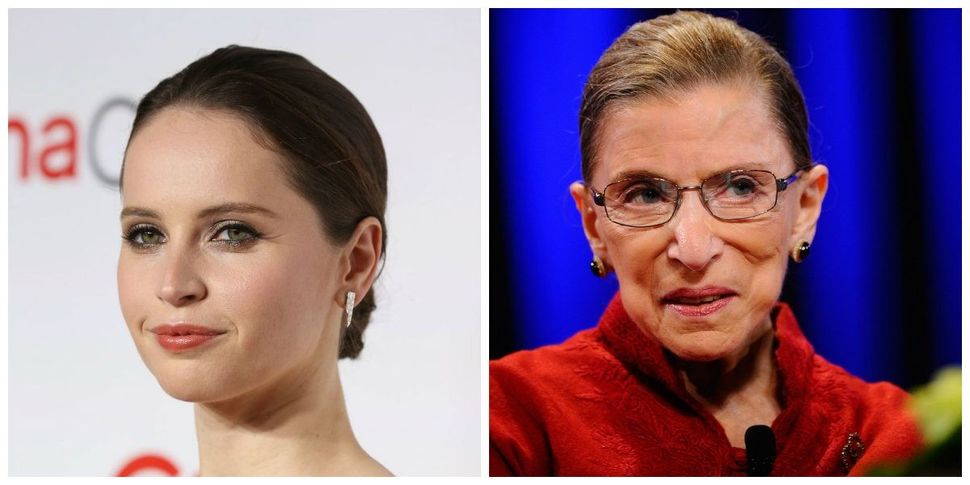 Supreme court justice Ruth Bader Ginsburg didn’t get the nickname “notorious” by staying quiet and keeping her questions to herself. Actress Felicity Jones says Ginsburg hit her with tough questions the first time they met, when Jones was preparing to portray Ginsburg in the upcoming biopic, “On the Basis of Sex.”

“When I first met Ruth, she said ‘You speak the Queen’s English and I’m a girl from Brooklyn. How is that going to work?’” Jones told Yahoo News. Jones remembers staring at Ginsburg, thinking “You have set the gauntlet.” The 34 year-old actress says that in spite of her fears, “I just went for it.”

Jones, who has consistently enchanted audiences from her Oscar nominated performance in the Stephen Hawkins biopic “The Theory of Everything” to her leading role in “Star Wars: Rogue One,” is a strong choice to play Ginsburg. Known for her sharp intellect and the depth of her characters, Jones even seems to have obtained the Justice’s blessing.

“We went Washington before we started shooting and hung out and went out for dinner,” Jones said. “She really welcomed us into her home.” Casually as if not remarking on visiting a living legend’s home, Jones commented, “She was totally on board from the very beginning.”

Ah, bliss. After being gently bullied by a reporter, Jones went on to acknowledge that there are similarities between her “Star Wars” character Jyn Erso and Justice Ginsburg, which include: “absolute determination…never, ever giving up, and ultimately achieving what they want.”