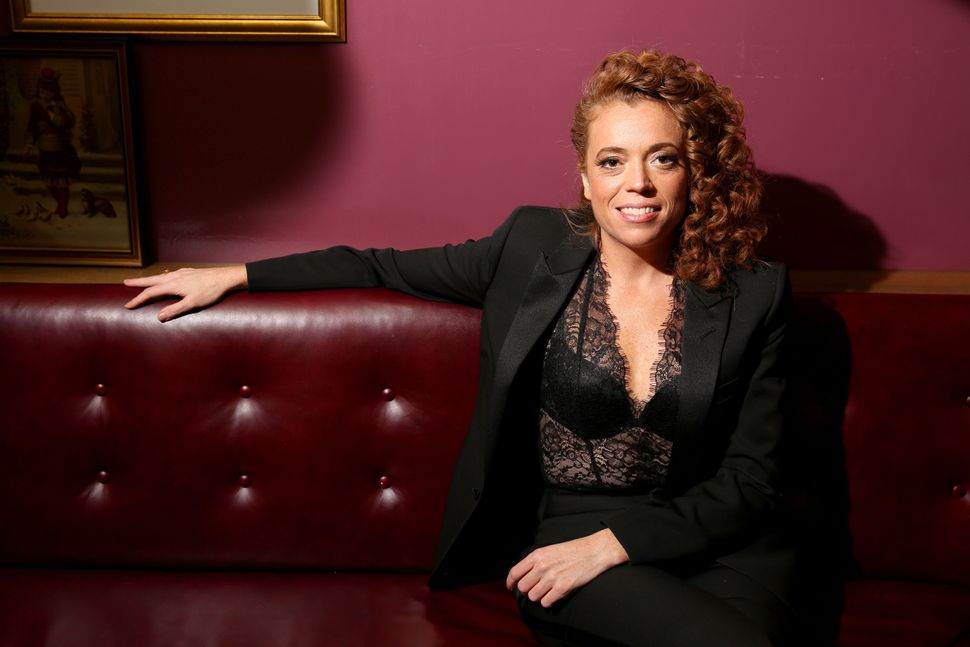 Credit is mostly due to the uniquely brazen and brilliant Wolf and her writing team. But the forces that made Wolf front-page-of-the-Internet news are a curious group of Avengers comprising the nation’s president and his apostles, and a sizable portion of the media who have proclaimed a higher allegiance to civility than truth.

During Donald Trump’s rise to and accession of power so much political discourse has been painfully divisive, as liberals and conservatives seem to retreat to farther and farther extremes. The response to Michelle Wolf’s “Correspondents” routine has provided much needed unity, reminding us that, ultimately, Americans on the left and right are still more interested in policing women’s voices than human rights violations, lawbreaking, discrimination, or treason.

Just what is it about the delicious combination of jokes about congress’ refusal to provide clean water to citizens and jokes about Michelle Wolf’s hairy vagina that has both the leader of the free world and leaders of the liberal press fainting in the aisles?

In her 19 minutes at the microphone, Wolf strung up the Trump administration and the press that cover him with the enthusiasm of University of Kentucky students stringing up a life-size effigy of Barack Obama. An incomplete list of the comedian’s targets includes: the entirety of Congress, Michael Cohen, the segment “Fox & Friends,” white nationalists, Jake Tapper, Mike Pence, Kellyanne Conway, Ted Kennedy, Scott Pruitt, CNN, MSNBC, “Morning Joe,” Rachel Maddow, and Megan Kelly, President Trump, and Wolf herself. In her most Jewish joke of the night, she wished Mitch McConnell “mazel” for “finally getting his neck circumcised.”

Response from the right was par for the tax-payer-funded course: “Disgraceful,” Sean Spicer tweeted. American Conservative Union chairman Matt Schlapp posted that he and his wife walked out of the “repugnant display,” adding with painful disregard for irony (he is a recent employee of the Koch brothers,) “enough of elites mocking all of us.” And the president, whose gift for naming things never abandons him, called Wolf a “filthy comedian.” Pointedly, he omitted her name, instead mentioning male comedian Seth Meyers.

The White House Correspondents’ Dinner was a failure last year, but this year was an embarrassment to everyone associated with it. The filthy “comedian” totally bombed (couldn’t even deliver her lines-much like the Seth Meyers weak performance). Put Dinner to rest, or start over!

It’s fine to agree with Donald Trump sometimes. Personally, I think he has some good points about family leave and Ted Cruz. But what Wolf’s more even-keeled critics seem to be responding to is a feeling that Wolf was not ladylike.

Politico’s congress reporter, Kyle Chenney, called Wolf “unnecessarily cruel on a night the WHCA was trying to showcase decency and purpose” as if the comedian was brought in to emcee an interfaith brunch instead of a political commentary event. “Unfortunately,” tweeted New York Times Chief White House Correspondent Peter Baker, “I don’t think we advanced the cause of journalism tonight.” Baker, too, writes as if journalism is a dignified art-form that is not to be sullied by things like the truth. And a comment by New York Times White House Correspondent and demi-celebrity in her own right Maggie Haberman caused a Twitter dispute that was harder to watch than a movie sex scene with your parents.

That @PressSec sat and absorbed intense criticism of her physical appearance, her job performance, and so forth, instead of walking out, on national television, was impressive.

Haberman was referring to this now famous comment Wolf made about Sanders:

I actually really like Sarah. I think she’s very resourceful. Like, she burns facts, and then she uses the ash to create a perfect smoky eye. Like, maybe she’s born with it; maybe it’s lies.

Wolf’s most contentious joke, interestingly, was written primarily for millennial women. A “smokey eye” is an immensely popular eye makeup look, one that Sanders wears most days. It refers to kohl and dark-colored makeup that is artfully smudged around the eye to create the illusion of dimension. The “maybe she’s born with it” line is a reference to the Maybelline makeup company slogan since 1991: “Maybe she’s born with it, maybe it’s Maybelline.” Wolf’s banal comment was not an insult to Sanders’ looks, only a glancing compliment to her makeup as a transition line to pointing out that Sarah Huckabee Sanders is a professional liar. That, along with Wolf’s comparison of Sanders to a character from the TV show “The Handmaiden’s Tale” who is the mouthpiece of an authoritarian regime, is not sexist.

But Haberman’s insistence that Wolf’s commentary is sexist, and that Sanders rather than the American people, is the victim, is toxic. Mika Brzezinski also chimed in to say that Sanders was “humiliated on national television for her looks.” Both Brzezinski and Andrea Mitchell called for Wolf to apologize.

Powerful men who hated and feared Michelle Wolf’s candid comedy called her “filthy” or said she was a disgrace to journalism. Women journalists, who don’t have the luxury of those direct attacks, called her an enemy of other women. Haberman, Brzezinski, and Mitchell seem genuine — they aren’t launching some insidious attack against female voices. Sarah Huckabee Sanders really did look horribly uncomfortable when Wolf mocked her, and it’s only human for any woman who survived high school to feel for her.

But women attacking women isn’t a tragedy of the patriarchy when it’s a female comedian offering a fair and funny criticism of a female press secretary. It’s actually a small triumph. The goal of feminism was never to get all women to play nicely together.

Men and women, right and left, rich and richer, united on Saturday night in their distaste for women who are not only smart but also a little dirty. This is a strange attitude to take, especially for reporters and politicians who are the best positioned to know just how dirty the world is.

The fact is that the president of the United States and his cabinet and the congress have the power to regulate vaginas. They strip away rights from women’s bodies like aestheticians strip away hot wax from the pubic region. Being more offended by a woman talking about vaginas than the over-regulation of vaginas — that really is humiliating.

Maria Teresa Kumar, the CEO of Voto Latino who has been to ten consecutive Correspondents’ dinners, summed up Wolf’s triumpon MSNBC on Sunday, “Every single year the comedian reflects the administration,” Kumar said. “There was a level of crassness that I have never witnessed — but I think it was speaking to a crassness that we have never witnessed in the White House.” Wolf, she said, “was speaking truths.”

The truth? In America, right now, things are filthy.