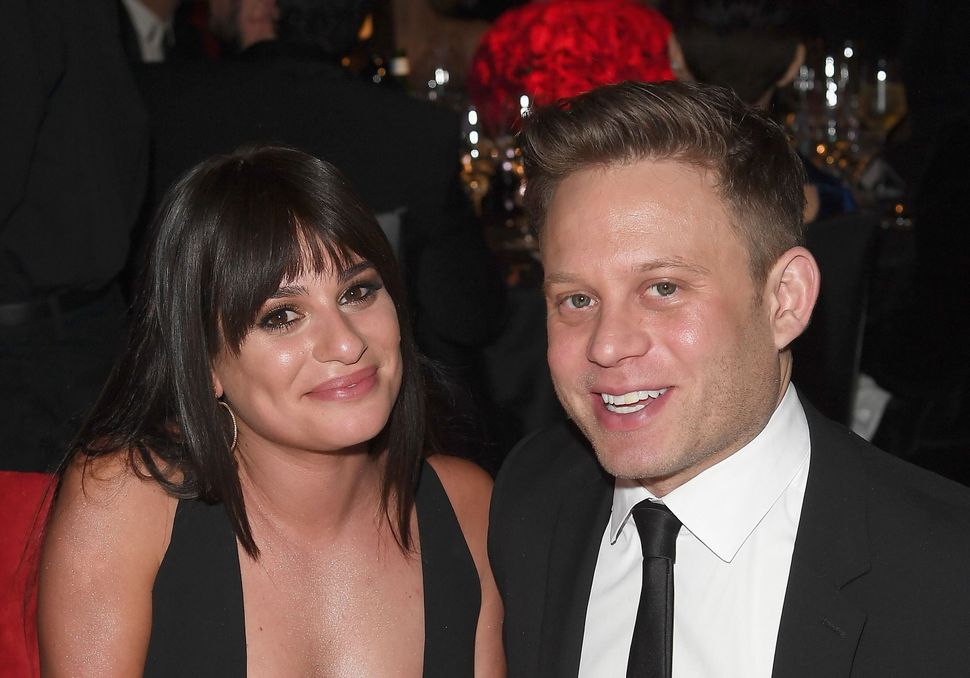 Lea Michele is engaged. But is he Jewish?

Her: an Italian-Jewish prima donna and heir to Barbra Streisand’s diva mantle, known for her role on “Glee.”

Him: a 35 year-old Wharton graduate named Zandy Reich (his last name is pronounced “rich”) who founded his own clothing line, played lacrosse at Penn, and used to work at Goldman Sachs. To commemorate their engagement he gave her a ring the size of a fetus at 28 weeks.

I mean, look! Don’t you want these two to build a bayit ne’eman b’Yisrael?

Let’s talk more about this ring. First, due to years of cultural baggage, I feel compelled to make this disclaimer:

As Shakespeare said, “Let me not to the marriage of people who are excited about diamonds and actual diamonds admit impediments.” Talking about celebrity engagement rings is a professional obligation of pop culture reporting, so we are going to talk about Lea Michele’s engagement ring. Also, it really is okay to talk about the historic connection between Jews and the diamond industry.

This diamond is the size of a dying star. People often note that Israel is so small, the whole country could fit in New Jersey. Well, the whole state of New Jersey could fit in Lea Michele’s engagement ring. To use scientific jewelers’ terms, Michele’s ring is one ginormous diamond with diamonds crushed into it, surrounded by a billion diamonds on a diamond-encrusted band. You could use it to saw down a rainforest and still have the energy to use it to cut up a well-done steak.

According to People, the ring is “a four-carat elongated radiant cut ring that [Reich] personally designed with Leor Yerushalmi and The Jewelers of Las Vegas.” Very little information about the intensely private Reich is available. There is no information to be found about his religion — Michele posted pictures of the couple together in generically cozy clothing on Christmas, but most people are cold on December 25! All we know is that after playing lacrosse for University of Pennsylvania and graduating from Wharton business school, Reich went on to work for fashion line Theory and now runs his the clothing company AYR (All Year Round.) The couple, who has been dating publicly since July 2017, seems unlikely to give us more details any time soon.

So take it from the editor of the “Life” section at the Forward, Avital Chizhik-Goldschmidt, whose Jewdar is stuff of legend. She said this: “Zandy=Alenxander. Jewdar rule #7 – play a goyishe sport. He’s a Jew with contacts in diamonds and head of a shmatte business.”