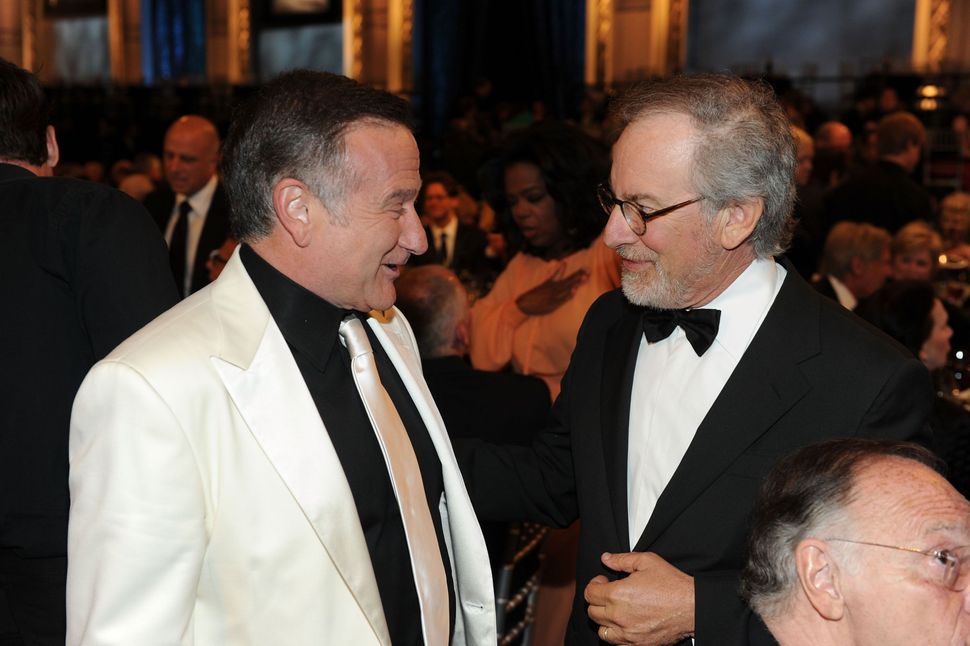 Robin Williams and Steven Spielberg in 2010. Image by Getty Images

Imagine what hell it must be to make a movie, write a book, or put together any piece of work about the Holocaust. Full immersion in the facts of mass genocide for months or years on end is psychological torture, whatever accolades or payment one may receive for it. Reflecting on the making of “Schindler’s List,” perhaps the most popular and enduring portrayal of the Holocaust ever shown on screen, Steven Spielberg said that comedian Robin Williams helped him stay emotionally well during the making of the movie.

Speaking at the Tribeca Film Festival on the 25th anniversary of the movie, Spielberg recalled that while he was shooting the film in Poland, Williams would call him on the phone once a week, always at the same time. “He would do 15 minutes of stand-up on the phone,” Spielberg said. “I would laugh hysterically … he’d always hang up on you on the loudest, best laugh you’d give him. Drops the mic, that’s it.” Spielberg said he and other members of the set also used episodes of “Saturday Night Live” to relax after days on set, where he said, “There was trauma everywhere.” In attempting to capture the traumas of the Holocaust, the director recalled, he and his cast and crew became traumatized. Williams, who Spielberg knew from directing him in the movie “Hook,” was indispensable.

On an “ask me anything” session on the website Reddit in 2013, just a year before his death, Williams confirmed the story, saying that he only called Spielberg “once, maybe twice.” Williams said that he joked that he was raising money for “a society devoted to helping raise money to help older Germans who had forgotten everything before 1945” and that he remembered Spielberg laughing and thanking him.

“Robin knew what I was going through,” the director said.