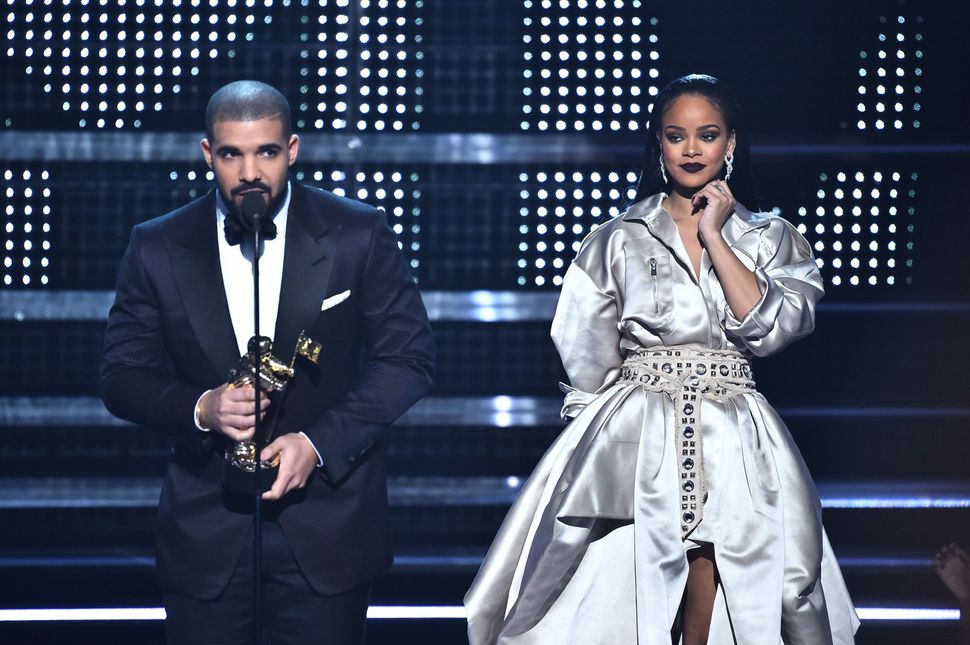 Drake and Rihanna at the VMAs in 2016. Image by Getty Images

In 2016 at the VMA awards, international superstar Rihanna gave one of the great performances of her career before receiving the Michael Jackson Video Vanguard Award. But before Rihanna could accept her accolade, the rapper Drake delivered a speech about the singer so overwrought that headlines the next day were not “Rihanna Triumphant At VMAs” but “Drake Professes Love For Rihanna.”

That night, the notoriously emotional rapper gave a tour de force performance of socially-unaware navel gazing, rambling about his relationship to Rihanna: “She’s someone I’ve been in love with since I was 22 years old, she’s one of my best friends in the world.” In short, Drake, the Jewish rapper we have but do not always love, made Rihanna’s success all about himself.

In her Vogue cover interview this month, the name Drake came up yet again. Hearing his name yet again during a moment that was about her, Rihanna, according to the journalist, “winces slightly at the mention of the rapper’s name before her eyes glaze over with cool indifference.” Describing Drake’s speech as “uncomfortable,” the singer and mogul said, “We don’t have a friendship now.” She added, “We’re not enemies either. It is what it is.”

It’s almost as if women don’t see male egotism masked as love as an appealing alternative to celebrating their own successes.