Mitt Romney’s ‘Favorite Meat is Hot Dog’ — But Does He Eat Hebrew National? 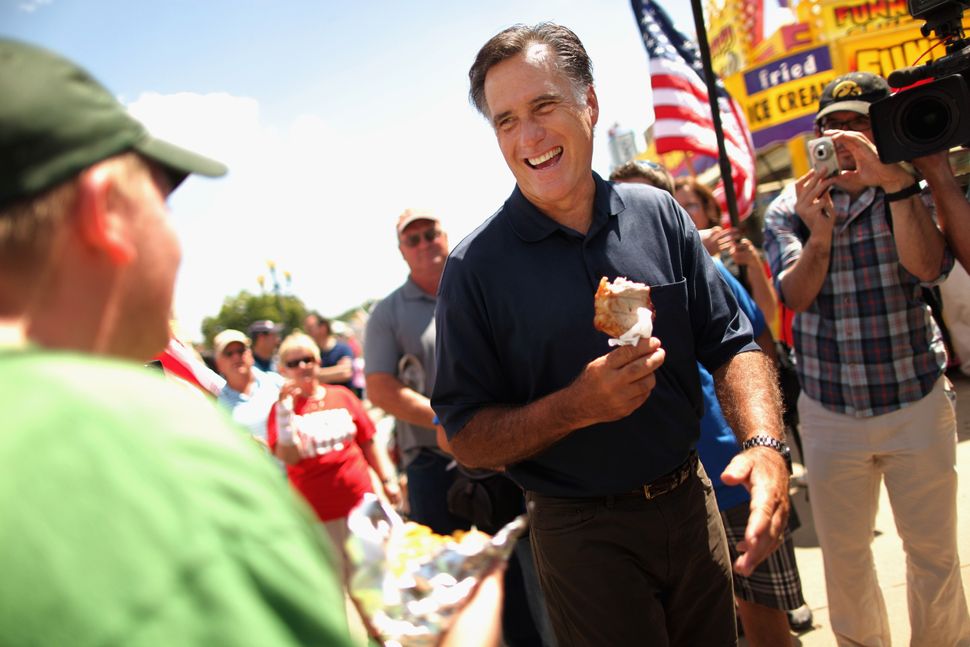 We have a beef with Romney — are these hot dogs kosher, or not?

Let’s begin by taking a look at the exact quote, in a profile of Romney in the Washington Examiner this week.

From the Washington Examiner, “Mitt Romney: Insurgent and Insider” Image by Screenshot

So does Mitt Romney answer to a higher power, like that of Hebrew National? Does America’s beautiful Mormon dad hang with the he-bro’s or pig out on pig parts?

This vegetarian reporter took a deep dive into Romney’s personal history with hot dogs and their subsidiary food products to get to the bottom of this.

Exhibit A: In a 2011 article from NPR, un-ironically titled “At Harvard, Romney Wasn’t Your Typical Student,” a lawyer named Mark Mazo tells a story about being served pork as a guest at the young Romneys’ home. “They served pork chops for dinner, and my wife doesn’t eat pork,” Mazo recalled, adding that, “Mitt was seriously embarrassed by that.” So the bad news: The Romneys do indeed eat pork. The good news: Mazo’s wife is Jewish, so she may have shown the Romneys the light of Deuteronomy’s chapter 14 and the error of their ways.

Exhibit B: In 2012, it was revealed that when he was Massachusetts governor in 2003, Romney had voted against a spending increase that would provide impoverished Jewish nursing home residents with kosher food. I am not a rabbi, but I would guess if Mitt Romney does not start eating a few kosher hot dogs soon, he is going to go straight to hell.

Exhibit C: On his long and fruitless (hah) campaign trail, Romney ate many of his favorite meats. He was seen eating a corndog, which may be made out of pork or kosher beef. He got barbecue in South Carolina, but made an oblique reference to hot dogs while he ate. Below is an image of Romney eating a hot dog while serving hot dogs while the youth of America gaze in adoration at the best of meats. 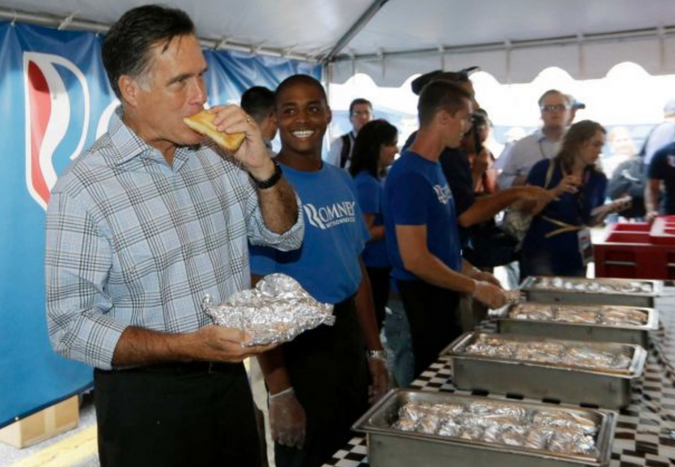 Exhibit D: At the Iowa State Fair in 2011, Romney became embroiled in controversy (if you will) when his lack of skill at flipping a pork chop made him front page news. (It was a simpler news cycle back then.) Romney, seeing his pork chop plop to the ground, announced to the crowd, “I’m afraid to tell you I love hot dogs and hamburgers.” True to his roots, yes. But we still don’t know the religious identity of those hot dogs or hamburgers.

Honorable mention: In 1983, the Romney family went for a 12 hour drive with their dog strapped to the roof of their vehicle, the very image of a “hot dog,” which went on to haunt him in both of his presidential campaigns. The dog was not kosher.

In 2011 the Atlantic mused, “Could Romney Be The First Jewish President?” Now we are left with pork (?) crumbs only, scrambling for evidence that a man who hates 47 percent of us might occasionally eat kosher. Oy va voy — Bernie Sanders, where you at?

Mitt Romney’s ‘Favorite Meat is Hot Dog’ — But Does He Eat Hebrew National?