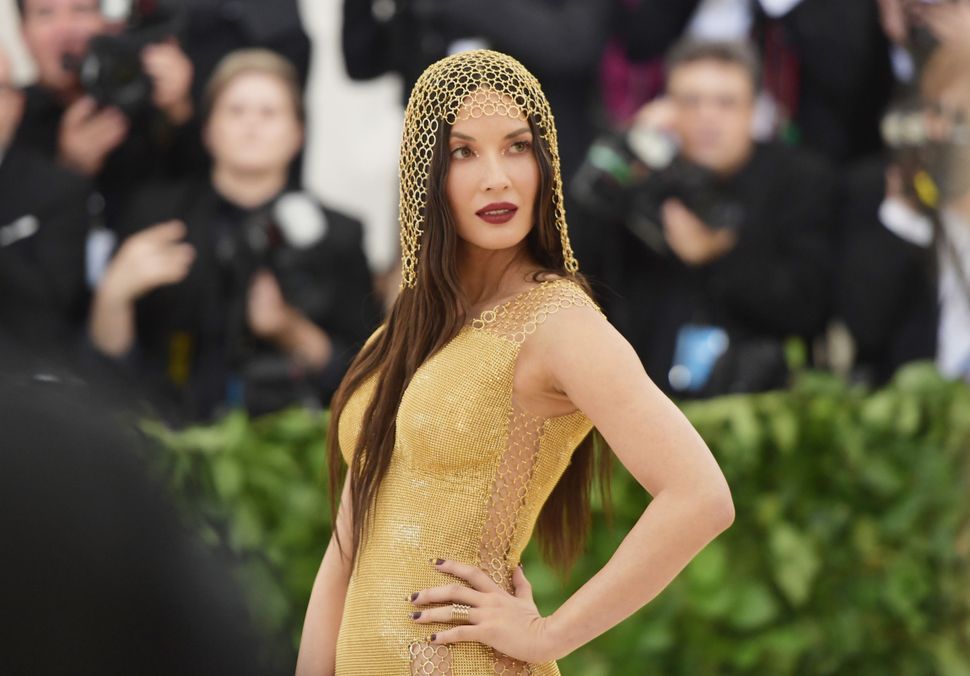 Olivia Munn at the 2018 Met Gala on Monday night. Image by Getty Images

The theme of the Met Gala 2018 is Heavenly Bodies: Fashion and the Catholic Imagination.”

All Jewish culture reporters should be sitting at home right now sipping martinis.

And yet, here we are.

We’re here because actress Olivia Munn, a beautiful and beloved comic actress who is not Jewish, arrived at the Met Gala in gold chainmail, announcing to reporters that her look was “inspired” by The Crusades.

Munn walked the carpet in a slithering gold dress by H&M with daring side slits, and a chain-mail headdress by decorated designer Michael Schmidt. The actress made it clear that she created this homage to the Crusades in collaboration with H&M designers.

.@oliviamunn stepped onto the red carpet in a shimmering gold chainmail dress by @HM with a coordinating golden net headpiece. See more from the #MetGala red carpet: https://t.co/BH7qVH5jTD pic.twitter.com/367tAsgIab

You could be asleep for 90 percent of high school European history and almost all of Hebrew school and still know that The Crusades were one of the least fun things that have ever happened to the Jewish people. Up there with the Spanish Inquisition, the nearly 200 years of religious wars that European Christians wrought on Muslims in an attempt to control land resulted in the horrific slaughter of innocent Jews caught in the crosshairs. Muslims, too, were brutally murdered en masse in the name of the Christian faith.

At some points during the Crusades, things got so bad that Jewish parents killed their own children as an “insult” to the oncoming Christian barbarians, who would have killed them anyway. So, yeah — a really inspiring event.

The Crusades were an attempt by the Pope and the Byzantine Emperor to consolidate power under the guise of Christianity. The same could be said of celebrities who, under the guise of celebrating Catholicism, use a Christian-themed fashion exhibition to sell clothing to the masses.

Now who’s the offensive one?