Jews And The World Cup: A Guide To Supporting Teams That Didn’t Expel Your Ancestors 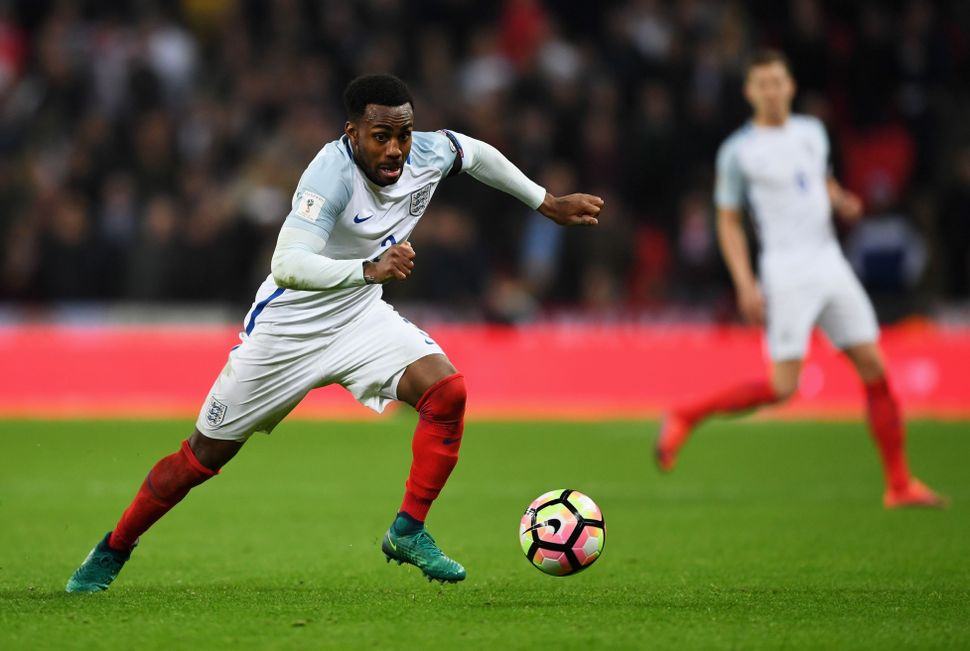 Danny Rose of England isn’t Jewish but has a very Jewish name.

Much like cicadas tentatively emerging from the ground after years of hibernation, the American public is gearing up once again to care about soccer. That’s right, it’s time for the World Cup, the international showcase of the globe’s greatest passion: bribery football.

As more and more Americans familiarize themselves with the beautiful game (average attendance at a Major League Soccer game is now higher than the NBA), old questions like “what is offside?” have been replaced with newer ones like “how was that not offside?”

Unfortunately, the American team is missing the tournament for the first time since 1986, having been eliminated in the qualifying tournament by Trinidad and Tobago. The great injustice here is that Team USA had to play both Trinidad and Tobago? (It’s a dumb joke, but I stand by telling it).

Fear not, dear reader, because the Forward’s crack team of soccer aficionados and rabbinic supervisors developed a foolproof formula to determine your rooting interests.

Then I ignored it and came up with my own system:

Rule 1: Don’t root for countries that our ancestors fled from:

During the first game of the European championship tournament two years ago, I was faced with perhaps the greatest dilemma of my young Jewish life. France, the tournament’s host, was playing Romania, the country that my great-grandfather emigrated from. How was I supposed to feel about the Romanian team? Should I root for Romania, because the blood of their country runs through my veins? Or should I root against Romania, because they made life so terrible for Jews that my family couldn’t bear to stay?

I ended up rooting for France, and I think I made the right decision, or at least the one that all good soccer fans would make. To quote noted soccer commentator William Faulkner, “The past is never dead — it’s not even past.”

Is it fair for English fans to mock the Germans by chanting that they’ve won “Two World Wars and one World Cup?” Maybe not, but it wasn’t fair for Germany to annex so much of Europe.

So this eliminates cheering for the following teams: Poland (which loses even more points because of its new Holocaust law), Russia (which loses even more points because it subverted American democracy), Spain (no one expects the Spanish Inquisition), and Egypt (there’s a whole holiday where we punish ourselves with terrible constipation to remember the evils of Egyptian slavery – and they’ve never once acknowledged all the hard work we did on the pyramids).

However, this rule does not preclude the possibility of rooting for Germany – they have demonstrated over the years that they are really, really sorry.

A corollary of this is Rule 1A: don’t root for countries that have supported anti-Semitic terror organizations — sorry, Saudi Arabia and Iran.

Rule 2: Root for the countries that love their Jews:

While the king of Denmark didn’t actually wear a yellow star during the Holocaust, as many Jewish day school children are taught, he did support the Jewish community during the occupation of his country and helped them escape. The king of Morocco also worked to protect Jewish citizens. Would it hurt you to show a little gratitude? (Also, Denmark’s Christian Eriksen is a really exciting player to watch).

More recently, South Korea, a country with a very small Jewish population, has become obsessed with studying the Talmud, with many schools introducing it into their curricula. Is their desire to study Jewish thought in pursuit of similar global success a subtle form of anti-Semitic conspiracism? It’s not for me to say. But as Yehoshua ben Perachia said, “Make for yourself a mentor, acquire for yourself a friend and judge every person as meritorious.”

No team USA means no Kyle Beckerman, whose dreadlocks gave him Samson-like strength. And team Israel, which is forced to compete against stronger European teams because of the Arab boycott, hasn’t made the tournament since 1970 (although, to be fair, they wouldn’t have made it if they were in the Asian conference anyway – not even the combined powers of Gal Gadot and Netta could have saved a team that could only beat Liechtenstein 1-0).

So no Jews in the World Cup this year, and the Jew-adjacent are slim pickings. Only two out of the 736 athletes play on teams in the Israeli league during the year, and even they aren’t much to write home about. According to The Guardian, midfielder John Ogu of Nigeria is better known for his “Shaku Shaku” dance than his soccer skills, and backup goalkeeper Predrag Rajkovic of Serbia “has a big sweet tooth: it wasn’t unusual for him to gain a couple of pounds whenever he joined up with the national youth teams.”

Jews in sports have always had more success as coaches than as players, and the World Cup is no exception. Colombia, currently ranked 16th by FIFA, is led by Jose Pekerman, who led the team four years ago to the quarterfinals, its best result ever. Pekerman is Jewish — his grandparents emigrated from Ukraine to Argentina — and is so beloved in Colombia that the country’s president gave Pekerman citizenship the day after he asked for it.

Rule 4: Root for the underdogs

The Jewish story is an underdog story – that’s why so many Jews love the New York Mets. Just like the Mets in 1969 and 1986, the Jews are a weak group who were repeatedly saved from insurmountable disaster by their own determination and, quite possibly, divine intervention.

This means that you absolutely can’t root for Brazil or Germany, the two top-performing teams in World Cup history. If you’re not from those countries, rooting for them is like rooting for the Yankees, if the Yankees also had a history of providing safety to Nazis.

Instead, consider teams like Iceland, the wonders of the 2016 European tournament. Team Iceland comes from a frozen island of 334,000 – less than the population of Wichita, Kansas – but went unbeaten in group play and handily defeated mighty England to make the quarterfinals. Here’s how unlikely their rise has been: Until taking over the job two years ago, head coach Heimir Hallgrimsson worked full-time as a dentist.

Other underdogs to root for include Senegal, who hope to be the first African team to make the quarterfinals since 2002; Peru, who are in for the first time since 1982 but may struggle without their home-field altitude advantage; Panama, who along with Saudi Arabia are listed as the longest of long shots at 5000-1 to win the tournament; and two teams with nicknames stronger than their skill levels, the Socceroos of Australia and the Samurai Blues of Japan.

If you want underdogs that actually have a chance to win, consider Uruguay or Belgium, two smaller countries that consistently punch (and in Uruguay’s case, bite) above their weight.

Belgium, captained by defender and likely future prime minister Vincent Kompany, is a particularly great team to watch, especially if you like the idea of a often-dysfunctional multi-ethnic democracy riven by historical grievances and exacerbated by changing demographics, uniting behind a sports team’s unlikely success. I know I do.

Rule 5: If you love neuroses, then root for England

For decades, players on the English national team have had more psychological anguish than a Philip Roth protagonist.

They invented the sport, they host the world’s best domestic league, and yet they haven’t won a major tournament in 52 years. So whether you’re the type to root for redemption or prefer the familiar comfort of catastrophe – both very Jewish traits – England is the team for you.

Jews And The World Cup: A Guide To Supporting Teams That Didn’t Expel Your Ancestors