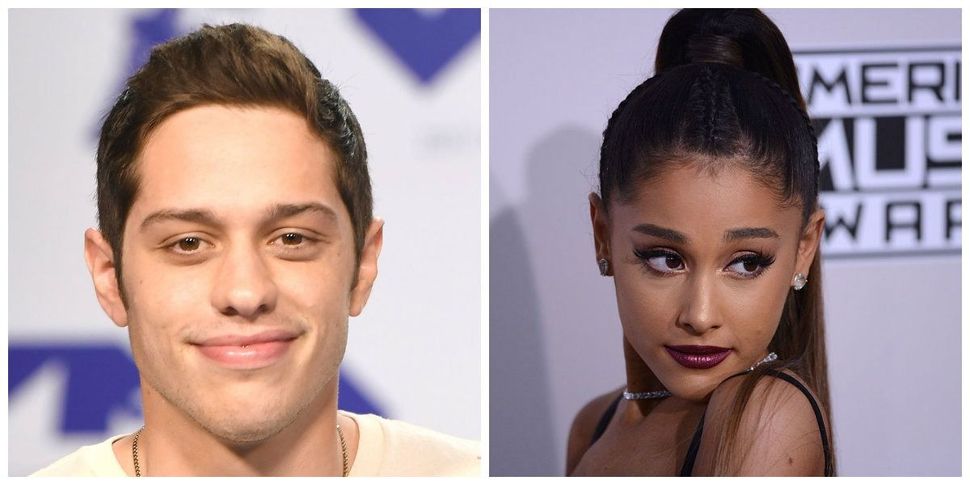 Were these adorable people written in the stars? Image by GETTY IMAGES/FORWARD MONTAGE

Her: A 24 year-old pop star with a famous ponytail and famous politics. She sings like Mariah Carrey and maintains a physical aesthetic that is school-girl-fetish-meets-actual-cupcake. She is an outspoken feminist.

Him: A 24 year-old comedian from Staten Island with a Jewish background, Crohn’s disease, and borderline personality disorder. He has an enormous tattoo of Hillary Clinton’s face.

If these two wanted to join forces to start a band, or maybe a startup that capitalizes on increased interest in mermaid-related content in our culture, we would all be on board.

But no. They want to get married.

Why must this occur? This makes as much sense as a baby field mouse getting engaged to a line of EDM music.

If Ariana Grande and Pete Davidson are getting married after two dates they better be committing to a Hasidic lifestyle. But I fear that this is not the case.

Listen, I get it. I would get engaged to any of Ariana Grande’s eyebrow hairs, if they asked. But just because you can doesn’t mean you should. Grande is barely two months out from her breakup with artist Mac Miller, while Davidson had appeared to be in a committed, longterm relationship with Larry David’s daughter Cazzie David until moments before the public reveal of his relationship with Grande. Can you even imagine how Larry would be acting if his daughter’s boyfriend of two months tried this malarkey?

Barely days into the relationship with Grande, Davidson immediately branded himself with two (2) tattoos honoring her. The couple began sharing pictures on social media that look like they were taken at a rave for tweens:

And then, before I even had a chance to make a date to talk about all this with my therapist, they were engaged.

I just checked outside and, yes, people *are* screaming in the streets about Pete Davidson and Ariana Grande.

^It’s a comfort to know someone has heard my screams

News of the engagement was announced almost exactly at the moment that President Trump and Kim Jong-Un began their summit in Singapore. One way or another, today the world may end.