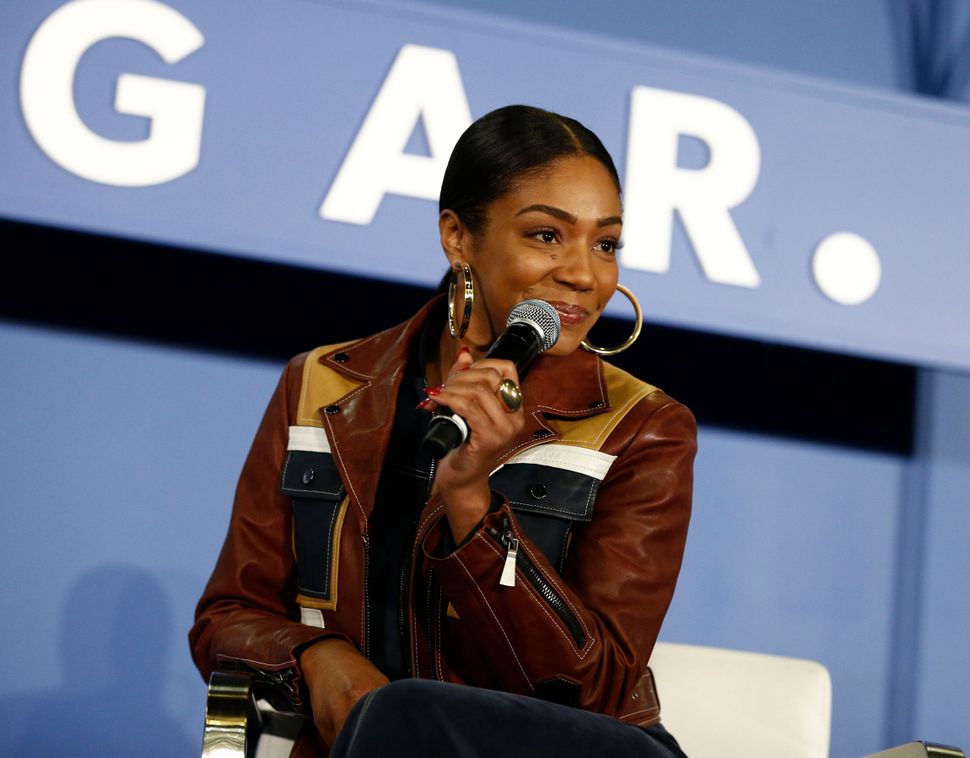 Tiffany Haddish has skyrocketed to the top of the A-list, where she belongs. Along the way, she ran into a few of Hollywood’s requisite A-listers and gave them some Haddishional motivational inspirational words to keep them going. In this case, the A-lister was Leonardo DiCaprio, the scene was a few months ago, and the sexual sparks that emerged from that moment are still ricocheting around the globe.

This “coochie squad” Tiffany mentioned is no mere urban legend. She refers here, of course, to the “Pussy Posse,” a group of A-list party boys circa the late ’90s that were known to smoke cigarettes with supermodels and drive off into the sunset in convertibles with the tops down and shirts and hair rakishly askew from a night of debauchery.

“I told him,” Haddish continued, “‘My only stipulation: I wanna do it with you as your character in What’s Eating Gilbert Grape.’ He starts bustin’ up laughin’. ‘Why?’ he asks, and I say, ‘Cause I feel like that performance deserves a real reward and that reward is this (gestures at her own body).’”

The performance DiCaprio gave in “What’s Eating Gilbert Grape” was iconic, but the performance Tiffany Haddish gave in “Girls Trip” was even more iconic. She should not be doling out rewards, she should be receiving them! Take note, Leonardo DiCaprio!

And DiCaprio isn’t the only contender for Haddish’s heart. Brad Pitt, another man who put in some of his best work in the ’90s, has thrown his hat in the ring, telling Haddish that if they were both single in a year, it would be time to make some moves. Haddish did her research and she was not into it, telling Jimmy Fallon, “He got a gang of kids. I can’t do it. I wanna be baby mama number one. But that doesn’t mean I wouldn’t eat dinner with him and play around, but I want to be number one.”

But between all the chaos of all of the the finest 90s heartthrobs publicly duking it out for Haddish’s heart, let’s not forget that she also confessed to knowing the identity of the boozebag who dared to bite Beyonce. Unfortunately, an ironclad restraining order has prevented her from speaking further. This is probably a good thing, because that man (and let’s be honest, it’s a man) has probably already taken on a new name and identity, just to stay safe. Because we’d all murder him.

Shira Feder writes. You can reach her at feder@forward.com