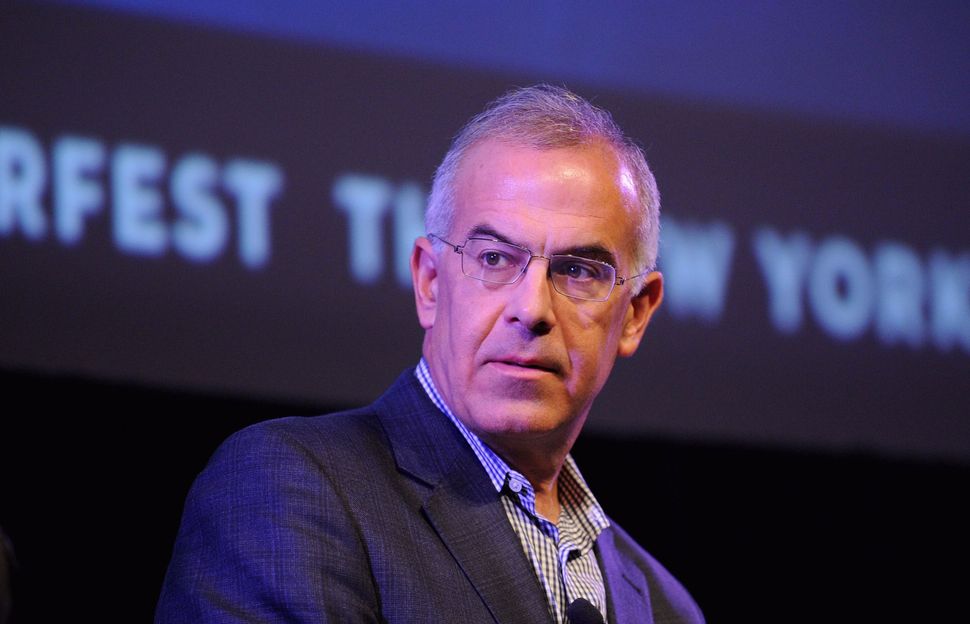 The Schmooze simply does not have room on its roster of enemies for one more old white man. We are at full capacity. But David Brooks just had to go there! So let’s do this thing.

David Brooks is considered a great American thinker. He has a New York Times column and best-sellers on topics like “character,” and he appears on CNN every so often to look sexy in his glasses and complain that too few people share his exact same values.

For a while now, Brooks, who has practiced Judaism his whole life, has been drawn to Christian thinkers. He is a part of Jewish culture but has a belief system that incorporates Jewish and Christian ideas. At a talk at George Mason University last week, Brooks described his new personal theology as “religiously bisexual.”

“What do you mean when you say that?” asked the host.

“I need my own bathrooms,” Brooks responded. The crowd, Haaretz reported, roared with laughter.

Brooks’ comments are upsetting because they make bisexuality into a joke when bisexuality is a legitimate sexual orientation and deserves recognition, instead of becoming ground for jokes made by straight people. And his comments are enraging because the line about “needing my own bathrooms” refers to the right of transgender people to self-identify, which is not a joke so much as a human rights issue. It also suggests that being transgender, like being “religiously bisexual,” is something of a precocious personal choice, rather than an immutable characteristic.

I would love to rail about how no person, especially a person with a platform like Brooks’, should treat other people’s sexualities as a joke.

I would love to write that a 56 year-old who lectures people for a living should have the intellectual bandwidth to understand the difference between sexuality and gender.

I would love to observe that Brooks’ professional peak occurred prior to the Iraq war and that he should leave comedy to professionals and that just because he is having the exact intellectual crisis that all college freshmen experience doesn’t mean he should joke about transgender people who endure constant, violent discrimination and high rates of murder because of who they are.

And I would really like to ask Brooks where he got the idea that it’s okay to laugh at people who fear basic activities like using the bathroom — is that Ethics of the Fathers, or First Corinthians?

But comments like that, especially from a young woman thinker, might just confirm Brooks’ opinion that people who, unlike him, don’t get to enjoy full human rights, have a tendency for hysterics.

So let’s try something else.

In college, I took a class on Christianity. And I fell in love. Jesus is incredible! And the Christian Bible is amazing. I was stunned by the simple, gorgeous stories and the idea of a faith that can be lived through radical kindness. Not 613 laws about animal slaughter, but clear, straightforward instructions on how to be good and live well.

I deeply sympathize with Brooks, and I think he’s getting at something real. I identify as Jewish and plan to practice Judaism for the rest of my life. But I try to let some Christian values infect my thinking, too. They enrich the way I live without detracting from my Judaism.

I challenge David Brooks to find another way to talk about his religious identity. A choice that doesn’t make light of sexual identity groups or encourage further misunderstanding and hatred of transgender people.

If such a great intellectual and humorist can’t do it, then I don’t know who can.