How Did A ‘Neurotic Jewish Guy’ Make The Horror Hit ‘Hereditary’? 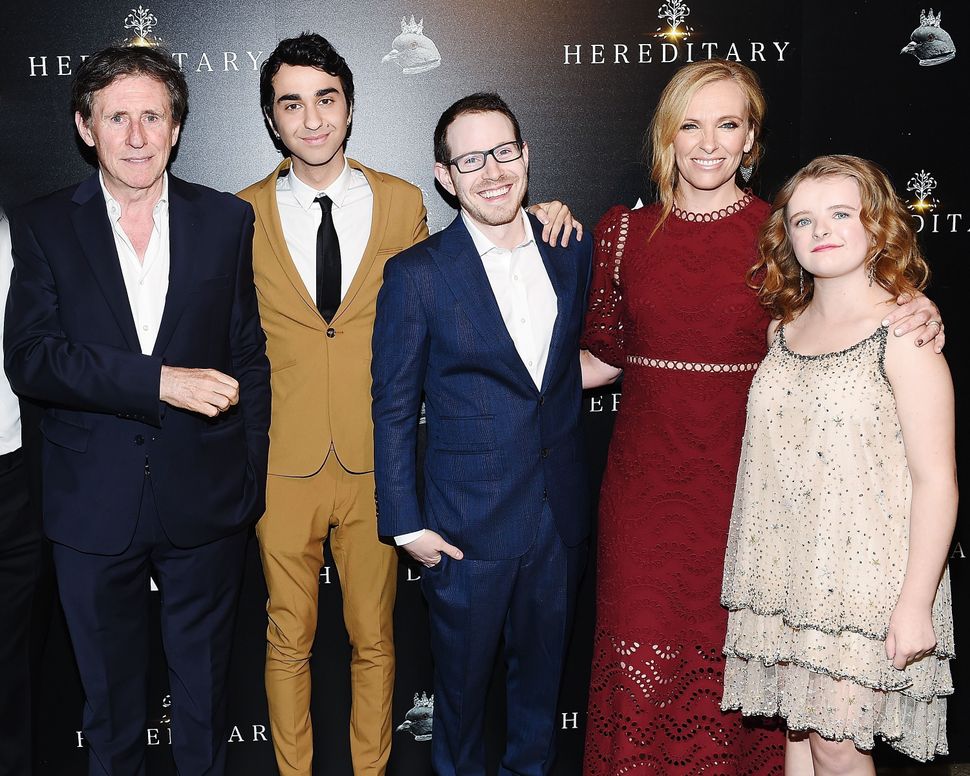 ‘Hereditary,’ is being called one of the scariest movies ever made. And sure, it has levitating corpses, eerie visions, and spewing blood. But the themes the movie deals with — mother-child relationships, genetic disease, inherited trauma, crushing guilt, dysfunctional families, tragedy, and anxiety — aren’t typical of the genre.

Jump scares aside — was “Hereditary” written by the reanimated corpse of Phillip Roth and a cabal of his most adoring fans? It’s hard to imagine a more Jewish horror movie.

The Schmooze did not see “Hereditary,” or even its trailer, having been forever scarred by “The Haunted Mansion,” the kiddie-horror movie based on the Disneyland ride, which we watched in 2003. We’re merely here to observe that the film that’s catching the cultural conscience with its terrorizing anxiety about generational turnover and inter-family guilt, is courtesy in part of filmmaker Ari Aster’s Jewish heritage.

We’re not ones to see some brown hair and a therapy appointment card and cry Jew. But let’s look at the fact’s — “Hereditary” is the 31 year-old Aster’s first feature film and it’s enjoying a score in the 90’s on Rotten Tomatoes, but as Aster told the JC “You know, one minute I’ll be very excited by the reactions and then the next I’ll have a lot of anxiety about it. It’s been a whirlwind.” In the same interview he mentioned his fascination with Freud, his feeling that family ties have supremacy over romantic relationships, a period when his family endured constant misfortune, his supportive parents, his relationship to Judaism, and his obsession with the idea of “home.” Let’s look at this quote:

I’m a very neurotic person, I’m hypochondriacal, and my imagination goes immediately to the worst-case scenario.

At one point in the article Stephen Applebaum, the reviewer for the JC, asked Aster if he sees any Jewish influences in his movie. Could the movie, asked Applebaum, “be touching, in a metaphorical way, on Jewish post-Holocaust anxieties about the possibility of society suddenly rounding on Jews” and the idea that Jews are never truly safe in the diaspora? “Maybe, yeah,” responded Aster, seemingly mind-blown. “You make a very good point, and what you just said touched a chord,”

Aster’s film clearly takes inspiration from his life experiences, a reality he neither conceals nor details. He told Vox, “I really wanted to make a film about the corrosive effects of trauma on a family unit. I knew that I wanted to make a film that had sort of an ouroboros quality about a family that’s basically eating itself in its grief.” He added, “It’s a story that I certainly had in me. I didn’t really have to find it.” But Aster stresses, with apparent anxiety, that he has “an amazing relationship” with his “incredibly supportive” parents and brother.

Several critics, including both Vox and Newsweek, have observed that some of the uniqueness of “Hereditary” derives from a lack of Christian imagery and its unusual approach to the Occult. Aster has an answer for that. “Maybe the lack of Christian iconography and stuff like that has something to do with the fact that I’m a Jewish guy,” he told Newsweek. And witchcraft? “Ultimately, I have no ties to the occult,” he said. “In any way. I’m just a Jewish guy. I’m just a neurotic Jewish guy.”

How Did A ‘Neurotic Jewish Guy’ Make The Horror Hit ‘Hereditary’?