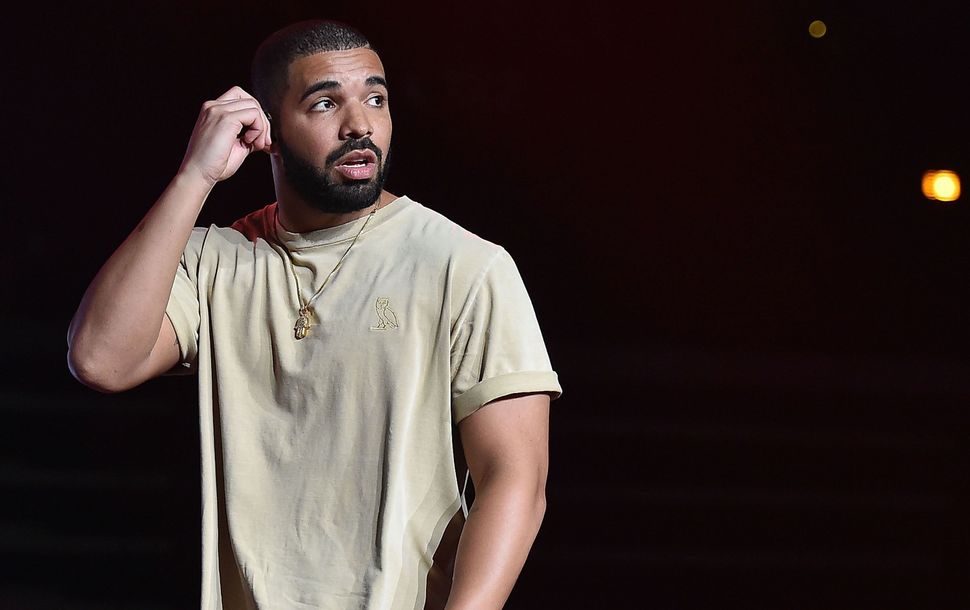 Even a hamsa can’t protect you from your mom, Drake. Image by Getty Images

Jewish rapper and producer Drake has had a lot to say about his mom, Sandi Graham, over the years. He has rapped about her. He has called her “the most important person in [his] life.” He has called her his “angel.”

“I do this all for you,” he captioned a video of Graham on her birthday.

Today the former-teacher had this to say about her son. When asked by a reporter for TMZ if she thinks her son and his various adversaries should drop their rap-beefs, she looked directly into the camera, raised an eyebrow, and said:

“They’re too grown-up for that,” she added.

The longtime single mother was alluding to her son’s ongoing feud with rapper Pusha-T, explained here in this excellent history by Doreen St. Felix for the New Yorker. Drake’s history of beefs deserve their own modern guide to the perplexed, but having none you can catch up here.

Drake, as TMZ pointed out, hasn’t responded to the latest volley by Pusha-T (though possibly that’s because it was such a mic-drop that there was nothing more to say.) But Graham acknowledges that she’s proud of her son for this choice. “I believe he always makes the best decisions…in the end,” she said, in a pitch-perfect example of Jewish parenting’s patented guilt-trip/compliment combo.

No more beef, Drake, ya hear? Try some schnitzel next time.