In The Weinstein Era, Pete Davidson Is The New Dream Man 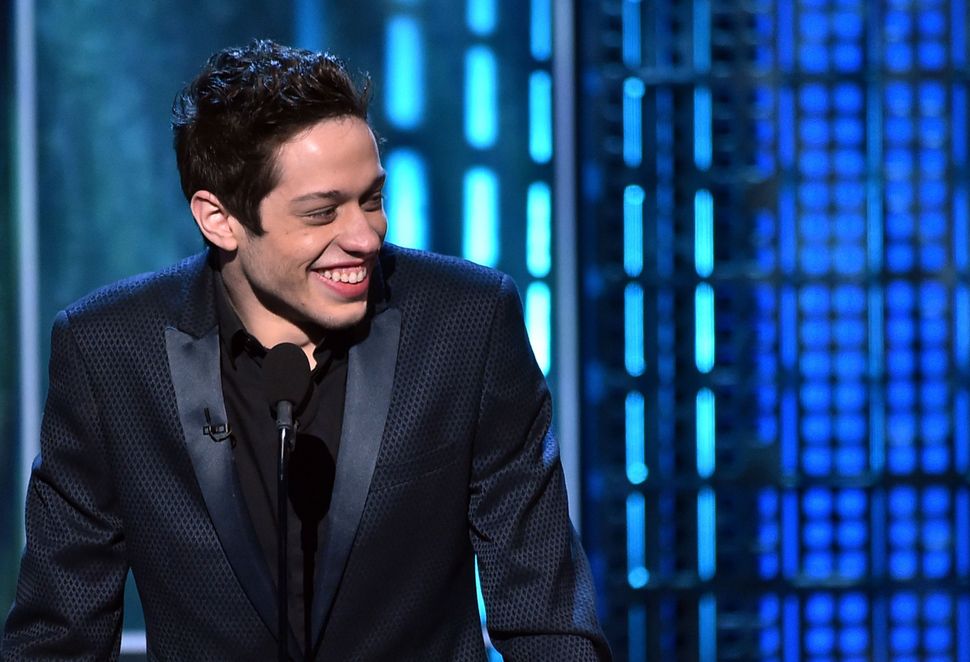 If you’re a person who feels sexual and romantic attraction to men, it has been a rough time for you.

Every day feels like an opportunity to find out that respected, beloved, trusted male public figures masturbated into public plants, trapped their female employees in his office, and groped young women while they wept.

Being attracted to men — seeking them continually as partners using a combination of logic and intuition while knowing that at some point through no fault of your own, you will probably run into a monstrous one — has begun to feel like being the protagonist of a dystopian horror movie from which there is no escape except death.

So, yeah, it’s not a great time for fans of XY chromosomes.

This brings us to Pete Davidson.

The 24 year-old comedian rose through the world of stand-up and secured a place as featured player on Saturday Night Live in 2014. He has appeared in the Amy Schumer movie “Trainwreck” and was recently featured in the Netflix movie “Set It Up.” After ending a long and public relationship with Cazzie David, the cool-girl (her hair is brown) writer-daughter of Larry David, Davidson became linked to pop star Ariana Grande. Within weeks Davidson was seen sporting tattoos in reference to Grande, then populating the mega-performer’s social media feed, then finally, buying her a ring, announcing their engagement, and moving into a $16 million apartment together in New York City.

In the time it would take a normal person to pick out a new dentist, Pete Davidson and Ariana Grande have each broken up with significant others, courted, and declared a lifelong allegiance to one another that the public seems more than invited to partake in. Witnessing the Grande-Davidson courtship — so fast, aesthetically magnificent, and seemingly ill-fated — has felt like watching a Monarch butterfly alight on the nose of a partially-mauled baby deer. Davidson and Grande are both tremendously magnetic and have experienced undo tragedy and struggle. Their relationship seems ill-conceived and oddly doomed to everyone except themselves. Writing about it, especially in light of Davidson’s borderline personality disorder, is fraught.

But just as quickly as they feel in love with each other, so many of us have fallen in love with Pete Davidson.

Peter Michael Davidson is young — not just youthful but downright juvenile. He has spoken extensively on his dependence on marijuana, and has been just as open about his diagnosis of Borderline Personality Disorder, a serious psychological condition that effects a person’s ability to regulate his or her emotions. And compared to his newly minted fiancée — worldwide superstar and polymath Grande, who with her tiny frame, racial ambiguity, and mild feminism seems calculated to embody male desire in 2018 the way Britney Spears did in 1999 — Davidson is merely average.

Yet Davidson — who, pre-Grande, certainly held niche-attraction for those who wanted their dopey stoner charm to come in a different form than the Rogens and Francos of the world — has become an object of immense desire. Somehow, without meaning to, Pete Davidson has seduced half of the world. The paradigm of masculinity that he embodies has arrived at just the right time.

Why? Pete Davidson just doesn’t seem like a toxic man.

Davidson seems honest.
His profound openness surrounding his tragic family loss, his psychological disorder, and his drug use gives the impression that he has nothing to hide, like, say, a history of abusing women or tweeting disgusting racist rants. He gives the constant impression of honesty. Davidson’s struggles actually seem like a boon — with him, you know you’re getting a person who is imperfect and striving to work on himself. In fact, he often seems so high that he would be incapable of lying. When he laughs uncontrollably in SNL skits it doesn’t seem calculated. When he says he likes Hillary Clinton, we don’t wonder if he’s telling the truth, because he actually got a tattoo of her face on his arm

the chamber of secrets has been opened …

His love seems genuine and endless.
Davidson doesn’t just wear his love for Hillary Clinton on his sleeve. When he loves, he loves publicly, openly, loudly, but not possessively. He confirmed his relationship with Grande with an image of the two of them where his arms are around her and he is wearing a hat that says “I love you,” and they are both dressed as characters from the series they love together. He seems proud of her and endlessly delighted to find himself with her.

He’s successful but not eerily ambitious
Davidson talented and successful, but he’s struggled — he dropped out of college and he is the opposite of pretentious. He apparently has ample emotional bandwidth to support his fiancée’s much greater fame. His most recent role outside of SNL, as an affable gay schoolteacher and friendly sidekick to the more conventional male lead in “Set It Up,” exemplifies his relaxed approach to semi-stardom.

He really, really doesn’t seem like he would assault you
If we’ve learned anything this year, it’s that sexual assaulters can look and act like anything and anyone. Tall, athletic, and aggressive? Sex criminal! Small, artistic, avowed feminist? Repeat-offense sex criminal! But Davidson leads neither with violent masculinity nor faux male feminism. He doesn’t need to constantly proclaim that he’s a feminist because it’s already clear that he treats women as equal humans. He seems like the kind of person who would go to the Women’s March with you and then not talk about how impressive that was for the next fortnight.

So if you’re scratching your head and asking exactly what it is that women want, look no further than Pete Davidson. If you’re genuine, loving, interesting, and non-violent, you could be living in a penthouse with a pop star in 10-15 business days.

Or, barring that, you’ll at least be able to look yourself in the eye and know that women don’t fear you.

In The Weinstein Era, Pete Davidson Is The New Dream Man