Ivanka’s Friends Are ‘100% Sure’ She’ll Run For President, And Other ‘Born Trump’ Revelations 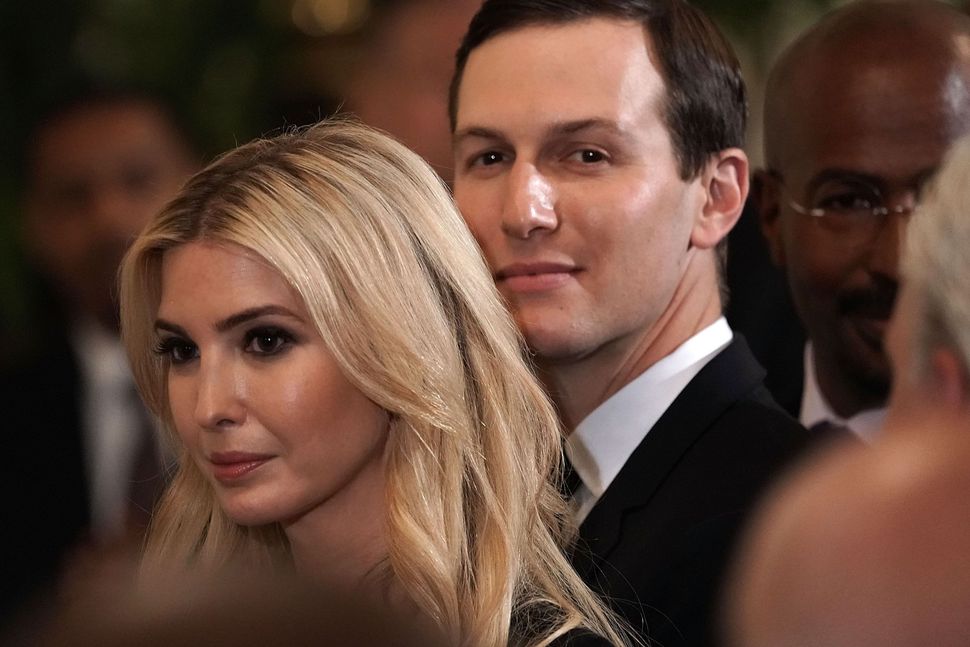 “Born Trump,” the tell-all look into the lives of the younger members of the first family, reads like Candace Bushnell-meets-Michael Wolff. Written by Vanity Fair journalist Emily Jane Fox, the new book is a delicious mixture of gossip, speculation and Liz Smith-ish insight that forms a juicy and Jew-cy narrative of the Trumps. Where the President failed, Fox does not — every page of her book titillates, even as it tends to rehash known dramas.

Here are some of Fox’s most gold-plated and sinister claims. Get out your popcorn, and maybe also your apocalypse-preparedness knapsack.

Fox’s book’s greatest triumph is its clear-eyed study of the woman who might be the most powerful first daughter in American history. Fox, who goes occasionally heavy-handed on the descriptions, calls Trump’s firstborn daughter, “the true second-generation version of that (Trump-style) salesman…tightly wound blond spoonful of sugar.”

And she will likely run for president, Fox says, according to her friends and business associates. “I’m a hundred percent sure it will happen,” one told the writer. “The attention, she loves it. She’s like, addicted.”

Ivanka and Jared attended Natalie Portman’s 2012 wedding to ballet dancer Benjamin Millepied as a married couple — Jared and the film star were friends at Harvard, though Portman has more recently referred to him as a “supervillain.” Friends at the wedding say Ivanka smoked weed alongside the Harvard/Hollywood crowd, which is an amusing image until you think about the fact that Ivanka now helps run a government that incarcerates people for the same crime.

Trump wanted Ivanka to get breast implants, and used her as his alibi when he cheated on Melania

Fox says that Trump often spoke with friends about his desire for his daughter to get breast implants, which he thought might help her modeling career. In another startling episode, Fox claims that when Trump was confronted by his then-girlfriend, Melania Knauss, about the makeup-smeared sheets and towels in his bedroom (which Fox says were casualties of his affair with model Kara Young), Trump told her that the linens had been dirtied by his daughter Ivanka.

We have now arrived at the Schmooze’s favorite piece of gossip in all 332 pages of Fox’s book. She quotes a guest who was present at Ivanka Trump and Jared Kushner’s wedding saying this about Rabbi Haskel Lookstein, who officiated the ceremony and Ivanka’s conversion:

It was stunning. And grandiose, even by New York standards. The only weird thing was the rabbi started talking about all the Jews suffering around the world at the start of the ceremony, which did not exactly scream romance.

If the Schmooze had a dollar for every rabbi we’ve witnessed turn a romantic occasion into an opportunity to reflect on Jewish suffering, we’d be able to pay for an entire JNF forrest in Israel. Guests at the wedding also recalled gender-segregated dancing that extended to women being asked to leave the dance floor entirely for a portion of the evening, while men performed a “traditional dance.” Non-Orthodox guests were affronted, Fox writes, even as Jared’s sister Nicole Kushner explained the practice to them. Ivanka wasn’t bothered — “It wasn’t as if she was a Jewish American Princess, even,” one guest recalled. “It was as if she’d been made the Jewish American Queen.”

At the end of the night, Fox says guests were given party favors — a pair of personalized flip flops and “a little Jewish book.”

When Ivanka wanted to support the Murdoch kids’ bake-sale, she used her mom as Sabbath goy

The Schmooze can’t help it, we’re just so tickled by this story. You know that thing of when you want to buy cupcakes from Wendi and Rupert Murdoch’s daughters’ bake-sale fundraiser on 5th Avenue but you can’t use money on Shabbat so you go to your Christian mom’s house and make her buy you the cupcakes? It’s just exhausting being Jewish!

All politics aside, we want to see this mezuzah.

Seryl and Charles have a minhag that’s not unusual among well-to-do grandparents — each of their grandchildren will take a special trip with them after their bar or bat mitzvahs to anywhere they want in the world. But each trip must begin with a visit to Novogrudok, the town in western Belarus where Charles’ mother Rae escaped the Nazis in 1942, taking shelter in the forests with the famous Bielski family group.

Fox also writes that as Ivanka and Jared’s children were been born, their Kushner grandparents bought each baby a multimillion dollar Manhattan apartment, put in a trust labeled “Kinderlach.”

“Well, I guess he’ll do”: Jared’s Jewish community on having the eldest Kushner son as a representative

In her research process, Fox spoke to members of the Kushners’ Paramus Jewish day school, the Ramaz school where Jared and Ivanka sent their children for a time, and Kehilath Jeshurun, where the couple attends services in New York and where Ivanka converted. Many people, she writes, were comforted to have a person who shared a similar lifestyle gain so much power.

However, she writes, “The consensus was that, without a doubt, there were smarter, more accomplished guys in his high school class alone who would have been perfect geniuses in the role. With Jared, the feeling was more along the lines of, Well, I guess he’ll do.” A high school classmate said, “He wouldn’t be a first- or second- or third-round draft pick.”

Fox doesn’t try to make a case for the Trump kids suffering, because she doesn’t have to — sometimes, they clearly did. Take this passage, about what it was like being Ivanka, Don jr., or Eric in 1993 —

When Secret Service accompanies the Trump-Kushners to New Jersey for the High Holidays, Jared recommends cool local dive bars that the agents think he’s lying about having visited

Your great-grandparents never thought they’d hear that happening in this country.

Ivanka’s Friends Are ‘100% Sure’ She’ll Run For President, And Other ‘Born Trump’ Revelations