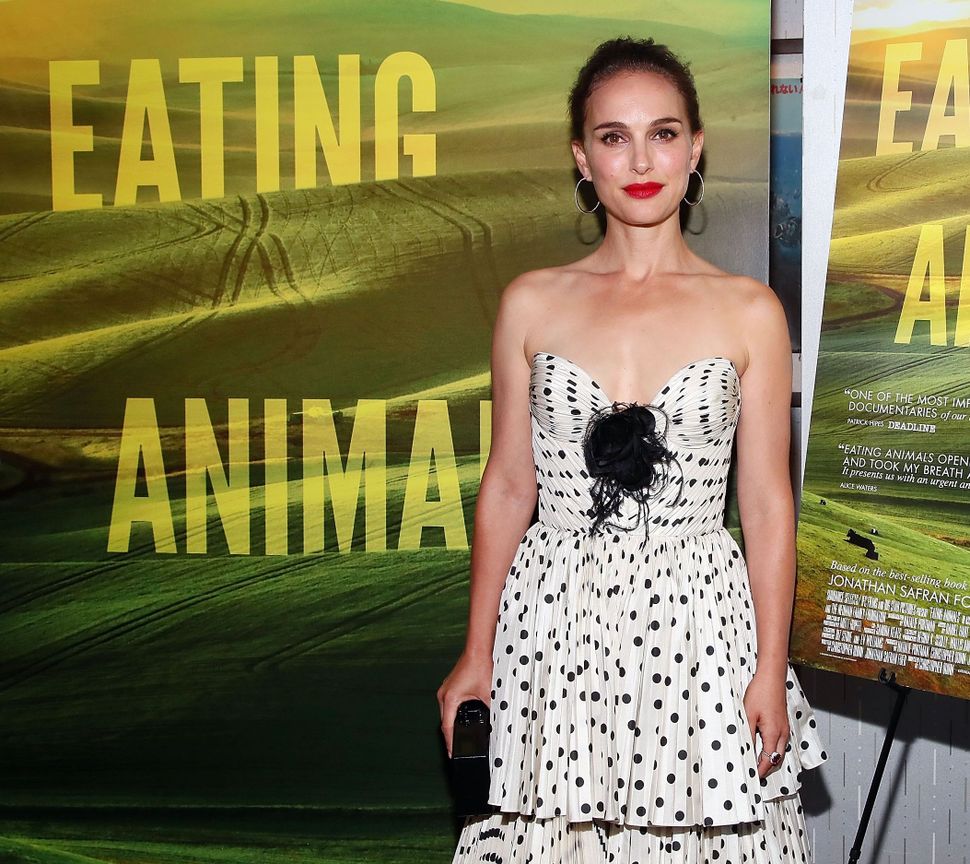 Do you like movies? You’re in the right place. Read on for the best, worst and weirdest of this week’s movie news, from a spirited disagreement about the new documentary “Eating Animals” to a review of Jeff Goldblum’s most recent flirty antics.

The new Natalie Portman-produced documentary “Eating Animals,” based on the Jonathan Safran Foer book of the same name, was the subject of a debate in the pages of the Forward. Executive editor Dan Friedman, reviewing the film, wrote that it weakened its own message by attempting to do too much; “though deeply right,” he wrote, the movie “is not compelling.” Aaron S. Gross of Farm Forward, an organization that contributed to the film, issued a rebuttal. “Rather than putting forth the simple message that all one needs to do is buy more humane meat, and instead by focusing on the life of real farmers, the film shows that we need to reform animal agriculture to get a meaningful supply of meat outside the factory farm system in the first place (the film also points to plant-based “meats” as a part of the solution),” Gross wrote.

2) Jeff Goldblum flirted with a journalist, to everyone’s delight

At 65, Jeff Goldblum is having a moment, and he is using it to get his flirt on. Speaking to David Marchese of Vulture, Goldblum they suggested they escape to a private island to read “Portnoy’s Complaint” together. Yes, really! Read the full interview for more questionable romancing.

3) “Watership Down” got the full Forward treatment

Ever wonder about the Jewish influences of “Watership Down?” Never fear: The Forward has your back. “The small band of rabbit survivors struggle along. They are nomadic wanderers searching for a new home. Their adventures recall those of both the biblical book of Exodus as well as the film ‘Exodus’ (1960),” Nathan Abrams writes. “Many obstacles impede their progress. One of those obstacles is a rival warren and in defeating its leader General Woundwort, Bigwig resembles David defeating Goliath. But they arrive at their Promised Land, a hill called Watership Down.”

4) Zoey Deutch made some alarming revelations about kissing James Franco

Thinking about kissing James Franco? Better not, advises actress Zoey Deutch, who has done precisely that. “After test driving his lips in a scene on ‘Why Him,’ she candidly describes his bad breath and mediocre smooching talent,” Bonnie Azoulay writes. “When prompted, she confirms that it was nothing memorable.” Yikes.